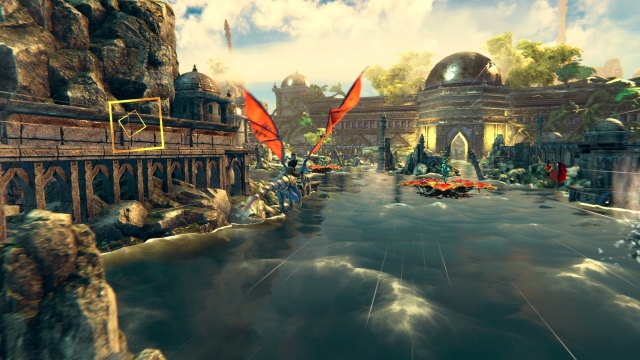 Forever Entertainment is finally ready to show off the Panzer Dragoon remake, due later this year.

As part of its jam-packed E3 Direct, Nintendo today showed a brief trailer for Panzer Dragoon: Remake, which is coming to Nintendo Switch later this year. The game is being published by Forever Entertainment, under license from SEGA.

Today's trailer showed the dragon and its rider flying over water areas, blasting pillars while beautiful scenery passes to either side and hit boxes appear on potential targets. Panzer Dragoon and its sequel, as well as Panzer Dragoon Orta, were rail shooters.

Naturally, since Nintendo showed off the footage, there was no word on whether the game is coming to other platforms such as the PlayStation 4 and PC. It seems likely the game will appear all over the place, though perhaps not on the same date.

Forever Entertainment is not a well-known developer, but it has been extremely active on the Switch as of late. Prior to that, it worked largely on mobile devices and PC. Its most recognizable property is likely the Frederic series of rhythm games, so it's difficult to say how well that experience will (or won't) translate to the remake effort.

Check out the trailer embedded above if you would like to see how the game looks for yourself, and watch for its eventual release as a download title later this year.

If you enjoyed this Panzer Dragoon: Remake article, you're encouraged to discuss it with the author and with other members of the site's community. If you don't already have an HonestGamers account, you can sign up for one in a snap. Thank you for reading!

© 1998-2020 HonestGamers
None of the material contained within this site may be reproduced in any conceivable fashion without permission from the author(s) of said material. This site is not sponsored or endorsed by Nintendo, Sega, Sony, Microsoft, or any other such party. Panzer Dragoon: Remake is a registered trademark of its copyright holder. This site makes no claim to Panzer Dragoon: Remake, its characters, screenshots, artwork, music, or any intellectual property contained within. Opinions expressed on this site do not necessarily represent the opinion of site staff or sponsors. Staff and freelance reviews are typically written based on time spent with a retail review copy or review key for the game that is provided by its publisher.