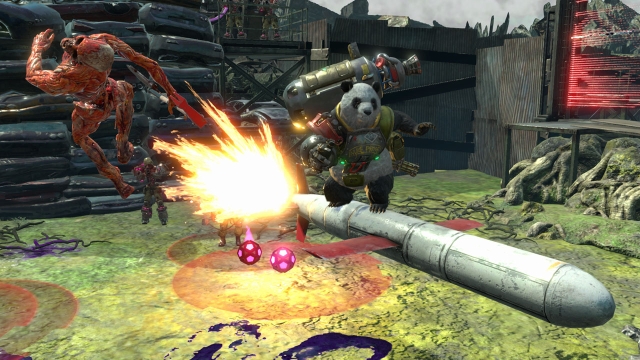 The new game appears largely to be modeled after the least popular installments in the series.

Konami will publish a new installment in the long-running Contra series later this year, the company revealed in a new trailer that was part of Nintendo's E3 Direct stream earlier today. The game is due to arrive on September 24, and will be available on Switch, PlayStation 4, Xbox One and Steam.

A press release from Nintendo describes the Contra franchise as "an over-the-top run-and-gun franchise with fast-paced, ultra-violent combat." The new game is called Contra Rogue Corps and features both single and multiplayer modes, for as many as eight players.

You might not remember the Contra franchise most readily for its zany characters, but today's trailer showcased a variety of interesting folks drawn from various past entries in the series, including a gun-toting panda. It seems likely that realism was not one of the development team's primary objectives.

The Contra series goes back a long way, and that history is being celebrated starting today with a release of a compilation that focuses on early installments. Closer to the end of its initial run, the Contra series abandoned sidescrolling run 'n gun action in favor of top-down blasting, which was met mostly with disdain by long-time fans. Someone at Konami must be feeling frisky, because this newest game once again takes that approach. Perhaps it was considered necessary in order to facilitate multiplayer mayhem on a larger than usual scale.

Contra Rogue Corps is due on September 24, 2019, and will be available digitally and in physical editions, with an MSRP of $39.99 USD. Are you ready to go rogue?

If you enjoyed this Contra: Rogue Corps article, you're encouraged to discuss it with the author and with other members of the site's community. If you don't already have an HonestGamers account, you can sign up for one in a snap. Thank you for reading!

© 1998-2020 HonestGamers
None of the material contained within this site may be reproduced in any conceivable fashion without permission from the author(s) of said material. This site is not sponsored or endorsed by Nintendo, Sega, Sony, Microsoft, or any other such party. Contra: Rogue Corps is a registered trademark of its copyright holder. This site makes no claim to Contra: Rogue Corps, its characters, screenshots, artwork, music, or any intellectual property contained within. Opinions expressed on this site do not necessarily represent the opinion of site staff or sponsors. Staff and freelance reviews are typically written based on time spent with a retail review copy or review key for the game that is provided by its publisher.