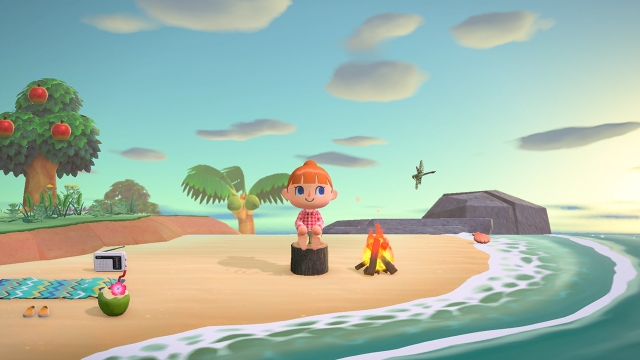 2020 is now the year to watch if you're looking forward to some Animal Crossing fun on Nintendo Switch.

During its E3 Direct, Nintendo today revealed an official name for its Animal Crossing project, announced earlier this year, and also shared some sad news: you won't be able to play the game until March 20, 2020. That's the better part of a year from today.

In the video, Nintendo explained that it simply needs more time to finish building Animal Crossing: New Horizons into the best game it can be. That's disappointing, and there's no getting around it, so Nintendo placed the news closer to the end of its presentation than the beginning, somewhat softening the blow by revealing a bunch of other games you'll be able to play in the meantime.

Animal Crossing: New Horizons looks to begin with a character arriving on an island to enjoy a vacation package purchased from Tom Nook. The entrepreneurial raccoon himself is on hand to help with item crafting, and to remind the player about a looming debt for services rendered. The player was also seen building roads and getting together with friends on a beach, among other things, so it looks like a more definite social element may also be in place. It will be interesting to see how ambitious Nintendo gets with this new design, but certainly the familiar elements seem to be in place.

Nintendo will have a lot of time between now and March to reveal additional elements of the still very much in-development title. In the meantime, check out the trailer embedded above to get a good look at what's developed so far. Then make whatever modifications are necessary on your calendar and go back to waiting (this time at least with the comfort of a very specific release date that is unlikely to change again).

If you enjoyed this Animal Crossing: New Horizons article, you're encouraged to discuss it with the author and with other members of the site's community. If you don't already have an HonestGamers account, you can sign up for one in a snap. Thank you for reading!

© 1998-2020 HonestGamers
None of the material contained within this site may be reproduced in any conceivable fashion without permission from the author(s) of said material. This site is not sponsored or endorsed by Nintendo, Sega, Sony, Microsoft, or any other such party. Animal Crossing: New Horizons is a registered trademark of its copyright holder. This site makes no claim to Animal Crossing: New Horizons, its characters, screenshots, artwork, music, or any intellectual property contained within. Opinions expressed on this site do not necessarily represent the opinion of site staff or sponsors. Staff and freelance reviews are typically written based on time spent with a retail review copy or review key for the game that is provided by its publisher.