The Witcher III: Wild Hunt heads to Switch with all DLC and expansions 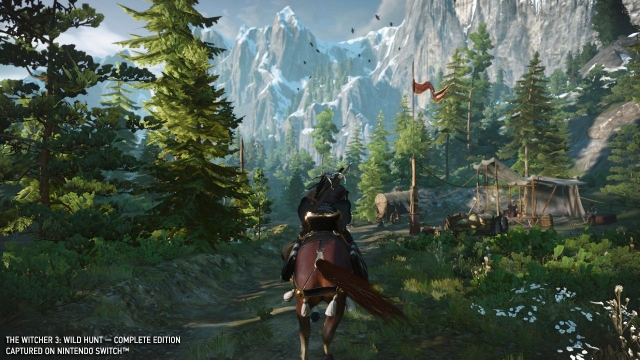 Enjoy Geralt's final journey on the go, without missing out on its expansive expanded content.

Rumors were confirmed today when Nintendo announced today in its E3 stream that The Witcher III: Wild Hunt is headed to Nintendo Switch. The game includes two expansion packs previously released for Xbox One, PlayStation 3 and PC editions of the game.

Developed by Saber Interactive "in close cooperation with CD Projekt Red," the game marks the first time the franchise, which generally is known for pushing the envelope where visuals are concerned (and also mature-skewing content that includes nudity), has come to Nintendo hardware.

A press release issued after the event reckons there are more than 150 hours of gameplay available, and for once that seems to mesh with the experience critics and players have had with the title. The content includes Hearts of Stone and Blood of Wine, two expansions that by themselves added dozens of hours of campaign, as well as all 16 free DLC that were previously added in support of an already massive adventure.

The Witcher franchise now accounts for more than 40 million units, and more than half of that number is thanks to the previous editions of Wild Hunt. The Switch version will be available digitally, and a physical edition is offered that includes a compendium, game map and stickers.

The Witcher III: Wild Hunt Complete Edition is already available for preorder from fine online merchants. You can find out more information about the game at the official Witcher III web site, should you feel so inclined.

If you enjoyed this The Witcher III: Wild Hunt Complete Edition article, you're encouraged to discuss it with the author and with other members of the site's community. If you don't already have an HonestGamers account, you can sign up for one in a snap. Thank you for reading!

© 1998-2021 HonestGamers
None of the material contained within this site may be reproduced in any conceivable fashion without permission from the author(s) of said material. This site is not sponsored or endorsed by Nintendo, Sega, Sony, Microsoft, or any other such party. The Witcher III: Wild Hunt Complete Edition is a registered trademark of its copyright holder. This site makes no claim to The Witcher III: Wild Hunt Complete Edition, its characters, screenshots, artwork, music, or any intellectual property contained within. Opinions expressed on this site do not necessarily represent the opinion of site staff or sponsors. Staff and freelance reviews are typically written based on time spent with a retail review copy or review key for the game that is provided by its publisher.