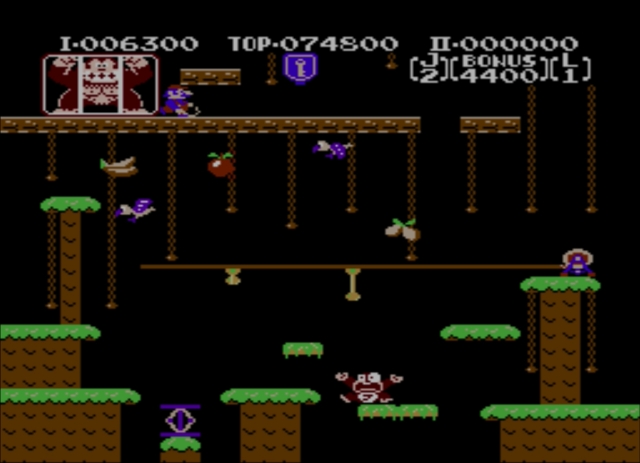 Three new additions bring the total number of NES games offered on the service to over 40.

Nintendo this week announced the latest three additions to its affordable but generally unpopular Nintendo Switch Online service which, among other things, lets gamers play online-enabled versions of NES games. The newest arrivals are Donkey Kong Jr., Clu Clu Land and VS. Excitebike.

Nintendo Switch Online, available for $20 a year, lets players save their game data to the cloud, and play online with friends and enemies who also subscribe to the service. Each month since the service launched, Nintendo has added 2 or 3 titles, so that soon there will be more than 40 options.

Players don't "own" the games and will lose access to them the minute they let subscriptions lapse, since Nintendo seems committed to never again offering a Virtual Console service similar to the one consumers enjoyed on Wii and Wii U, but those players can pay the fees and return at any time to enjoy a swelling library that at this point rivals the lineup offered on the ridiculously popular NES Classic Mini console (and at a much lower cost). Many consumers feel this represents a bad value, because... reasons?

In any event, this month's three additions probably aren't going to thrill anyone, though I'm happy enough to see them join the list. Nintendo also promises additional titles in coming months, so perhaps those will offer broader appeal.

The official descriptions of each inbound game from the press release are reasonably solid, marketing speak aside, so here they are in all their glory:

Donkey Kong Jr.  Based on the popular arcade game, Donkey Kong Jr. is the sequel to the immensely successful Donkey Kong game. Play as Donkey Kong's son, and rescue your dad who has been kidnapped and imprisoned in a cage by Mario. Use jumping and climbing abilities to clamber up vines and chains, gather vital fruit and keys, and open the cage to free your father. Make sure you avoid the pesky birds, nasty electric sparks and creepy chompers. Four different worlds filled with numerous climbing and jumping puzzles await you in this timeless classic.

VS. Excitebike  Fans love the Excitebike game for its frenetic races, high stakes and sweet jumps. With this game, you can take it to the next level with the Famicom disk version of VS. Excitebike  complete with two-player split screen. Create tracks from 20 classic Excitebike track parts, and go for a best time or take on friends. Racing is even more exciting when the rivalries are real. You can also try out the single-player mode in VS. Excitebike. It adds tracks, music and the ability to save your high score.

Clu Clu Land  The greedy Sea Urchins have stolen all of Clu Clu Land's gold bars and buried them in a series of mazes. As Bubbles, a brave bubble fish, you'll set out to uncover all of the gold bars in each maze. With 20 stages to complete and increasingly complex conditions (like having to pass over the gold bars twice to uncover them), you might just want to bring along a friend for help.

The three new games will be available starting one week from today, on May 15. If you're not into the idea of playing yesteryear's classics, you might also enjoy playing the surprise hit, Tetris 99, which lets 100 players compete in Tetris matches to see who will be the last one standing.

Nintendo Switch Online is available in configurations for a single player or an entire family, and also offers members the opportunity to spend $60 ordering physical NES-style controllers they can use to play NES classics on the Switch. Have you subscribed?

If you enjoyed this Donkey Kong Jr. article, you're encouraged to discuss it with the author and with other members of the site's community. If you don't already have an HonestGamers account, you can sign up for one in a snap. Thank you for reading!

© 1998-2020 HonestGamers
None of the material contained within this site may be reproduced in any conceivable fashion without permission from the author(s) of said material. This site is not sponsored or endorsed by Nintendo, Sega, Sony, Microsoft, or any other such party. Donkey Kong Jr. is a registered trademark of its copyright holder. This site makes no claim to Donkey Kong Jr., its characters, screenshots, artwork, music, or any intellectual property contained within. Opinions expressed on this site do not necessarily represent the opinion of site staff or sponsors. Staff and freelance reviews are typically written based on time spent with a retail review copy or review key for the game that is provided by its publisher.