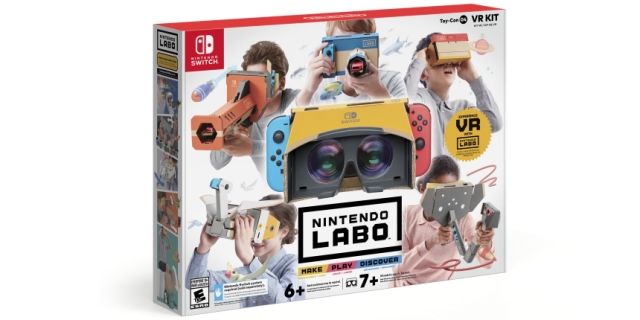 Technically, Nintendo has made previous attempts to make noise in the VR space, but that went rather badly.

Nintendo of America today made a surprise post to Twitter, announcing the impending arrival of Nintendo Labo: VR Kit, the fourth installment in the Labo series that debuted in April of 2018 and got people excited about using cardboard to build things. Soon, they'll be able to use more cardboard to build "Toy-Con" they can then use to explore virtual worlds.

Experience a new dimension with the latest #NintendoLabo kit! With more games & creations than any previous kit, Nintendo Labo Toy-Con 04: VR Kit is a unique first VR experience kids & families can build themselves! Arriving 4/12, only on #NintendoSwitch.https://t.co/PCxm9sZSed pic.twitter.com/B21Fa2FLCQ

The Nintendo Labo: VR Kit bundle will be available with an MSRP of $79.99, and includes "software and materials to build all six Toy-Con projects  the Toy-Con VR Goggles, Toy-Con Blaster, Toy-Con Camera, Toy-Con Bird, Toy-Con Wind Pedal and Toy-Con Elephant  as well as a Screen Holder and Safety Cap." If you would like to spend a little less, you can get going with a starter kit that retails for $39.99, as well as expansion kits that give you more of the remaining content for $19.99 apiece.

Based on the pricing, it looks like you can save $0.02 by purchasing everything separately, so make sure to go that route if you want to save some green.

"This new kit builds on the core tenets of Nintendo Labo  Make, Play and Discover  to introduce virtual reality in a way that's fun and approachable for both kids and kids at heart," said Doug Bowser, Nintendo of America's Senior Vice President of Sales and Marketing and its future President. "We wanted to design an experience that encourages both virtual and real-world interactions among players through passing around Toy-Con creations."

Nintendo was widely criticized for daring to have a window of time during the 2019 calendar year when there was no new Switch software releasing, but now it looks like this Nintendo Labo VR kit was probably planned all along. Unphased, critics have now shifted to calling Nintendo out for releasing VR that will incorporate a 720-pixel screen, which is a "huge mistake."

Only time will tell on that score, but for now it looks like the people at Nintendo are ready to test the VR waters again. Dare we hope they'll revive some of the classic experiences from that older era, like Nester's Funky Bowling, Mario Clash, and the Wario game? Again, only time will tell!

If you enjoyed this Nintendo Labo: Toycon 04 - VR Kit article, you're encouraged to discuss it with the author and with other members of the site's community. If you don't already have an HonestGamers account, you can sign up for one in a snap. Thank you for reading!

© 1998-2020 HonestGamers
None of the material contained within this site may be reproduced in any conceivable fashion without permission from the author(s) of said material. This site is not sponsored or endorsed by Nintendo, Sega, Sony, Microsoft, or any other such party. Nintendo Labo: Toycon 04 - VR Kit is a registered trademark of its copyright holder. This site makes no claim to Nintendo Labo: Toycon 04 - VR Kit, its characters, screenshots, artwork, music, or any intellectual property contained within. Opinions expressed on this site do not necessarily represent the opinion of site staff or sponsors. Staff and freelance reviews are typically written based on time spent with a retail review copy or review key for the game that is provided by its publisher.