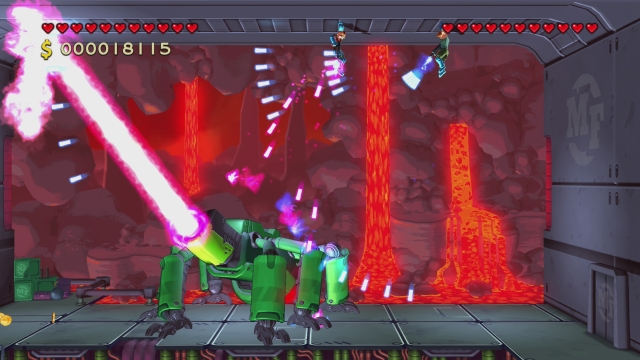 The new game from Gunman Clive developer Bertil Hörberg and crew is more ambitious than what we've seen before.

Gunman Clive and its sequel have done a good job of making a name for themselves on Nintendo hardware, including recently the Nintendo Switch, but developer Bertil Hörberg hasn't stopped to rest on his laurels. Yesterday morning, just before Reggie Fils-Aime announced he would be retiring, Hörberg sent an email blast to let people know there's a new game on its way from his studio, due this spring.

Hörberg himself describes Mechstermination Force as a "sort of mix of Contra and Shadow of the Colossus," which is exactly what you'll see when you watch the trailer (embedded below). We thought some folks might want to know more about this intriguing title, so we sent Hörberg a few questions and his answers came through this morning. Enjoy!

Q: Youve said this game has been in development for the last 1.5 years. Did you have the idea as you were finishing up your most recent Gunman Clive project, or was this just what came to mind once you started contemplating what to do as a follow-up?

When I finished Gunman Clive 2 and the HD Collection back in 2015 I had two ideas I was playing around with. This was one of them and the other was a way too ambitious 3D action game. I went for the second one and spent years getting very little work done on it and falling into a depression. Then in 2017 my old friend Daniel Ribera Olsen left his job as Art Director at Pieces Interactive, and I was in need of a change as well so we started talking about doing a project together, and I ended up hiring him and revisiting this idea.

Q: How did Mechstermination Force development progress differently, now that youre working with an actual team? Did everyone sign on for particular roles, or did folks have their hands on everything?

At first it was just me and Daniel, then later we hired another 3D artist to help finish the project, and we're also outsourcing music and sound. So everyone had clear roles except for me who still does a bit of everything. I tried to leave most of the art to the artists, but I can still be pretty hands on and particular about certain things, and I like to experiment with different technical solutions for how to achieve certain visual effects. Also I hadn't really worked with other people in 6 years, and never been in charge before so there was certainly some adjustment period needed, and I still don't really know what I'm doing when it comes to leading a team.

Q: The game clearly resembles older titles like Contra and Shadow of the Colossus. Was that intentional, and are there other games that inspired the design?

Yes the basic idea was always pretty much a mix of Contra and SotC. Those who played Gunman Clive 2 all the way through may remember that I already flirted with the idea back then, and I had actually wanted to make that kind of boss for a long time. But I felt I could do a lot more with it in a full game tailored around the concept. Though despite citing SotC as a big inspiration, I hadn't actually played it since the original PS2 release, until I got the remake about halfway through the production of this game. So there's not really that much direct influence from SotC, more the general idea. Other inspirations include Gunstar Heroes, Treasure games in general, and classic Mecha Anime.

Q: The trailer showcases what looks like a level hub, populated by other characters. Will the gameplay include optional quests, in addition to those that might advance any narrative?

There aren't really any quests as such. The main point of the hub is basically just to give the player a little time to breathe between bosses, talk to some people and buy some upgrades.

Q: About how long do you expect it to take for players to progress through the entire campaign, assuming they dont get hung up on a particular challenge?

I'm hesitant to give a specific number of hours. Because it's all bosses and no filler content it really all depends on the difficulty, which I'm still tweaking. I don't want to make it overly hardcore and sadistic, but still give a decent challenge and a satisfying experience. It's a tricky balance, and each boss takes a lot of work to produce.

Q: Like a lot of Switch games, Mechstermination Force will support multiple players at once. What sort of efforts did you make to balance difficulty, so the game is fun alone or with friends?

Honestly, a lot of the time, the added chaos of a second player balances out the benefit you get from the double fire power and double health, so I haven't touched up the difficulty that much for co-op, though some bosses do change their behavior a bit with two players. If you're good at cooperating you'll probably have a pretty big advantage playing in 2 player mode.

Q: Is there an upgrade system, so players grow more powerful or gain access to additional weapons as they progress, or are the weapons and power they have at the start the same as the ones theyll have near the end?

Yes you can buy new weapons and more health. There are also a couple of key items you'll get at certain points in the game that expands your moveset.

Q: As you wrap up development on Mechstermination Force, are there any other genres you would particularly like to tackle for your next project?

I would still like to do my overambitious 3D action game someday, but after this project I want to work on something smaller and simpler, and I've come to realize in general that I need to keep my projects at around one year of development max.

Q: Do you have any current plans to bring Mechstermination Force to platforms besides Switch, such as PC, PlayStation 4 or Xbox One?

I don't have anything decided yet, but depending on how the game is received it will likely happen. However I want to start working on something else right away, and considering that the game is written in a 100% custom engine, with incredibly messy code, getting someone else to do the port might be tricky, or at least a lot less efficient than doing it myself, so we'll see when/if that happens.

Q: If you could say just one thing to the person who might be thinking about purchasing Mechstermination Force right now, what would it be?

Please buy it if you like robots, bosses, platforming or old school gaming in general. There's still a lot of cool stuff we haven't shown yet, as we tried our best not to spoil too much in the trailer.

Thanks for answering those questions, Bertil, and good luck to you and your team as you finish up the game and set your sights on new challenges!

If you enjoyed the above Q&A and you would like to see others like it, or if you've been working on a game and you'd love to tell the HonestGamers audience about it in a bit more detail, don't hesitate to get in touch. And if you just want to find out more about the game, a great way to do that is by watching the trailer. It's embedded above, for your convenience.

If you enjoyed this Mechstermination Force article, you're encouraged to discuss it with the author and with other members of the site's community. If you don't already have an HonestGamers account, you can sign up for one in a snap. Thank you for reading!

© 1998-2020 HonestGamers
None of the material contained within this site may be reproduced in any conceivable fashion without permission from the author(s) of said material. This site is not sponsored or endorsed by Nintendo, Sega, Sony, Microsoft, or any other such party. Mechstermination Force is a registered trademark of its copyright holder. This site makes no claim to Mechstermination Force, its characters, screenshots, artwork, music, or any intellectual property contained within. Opinions expressed on this site do not necessarily represent the opinion of site staff or sponsors. Staff and freelance reviews are typically written based on time spent with a retail review copy or review key for the game that is provided by its publisher.