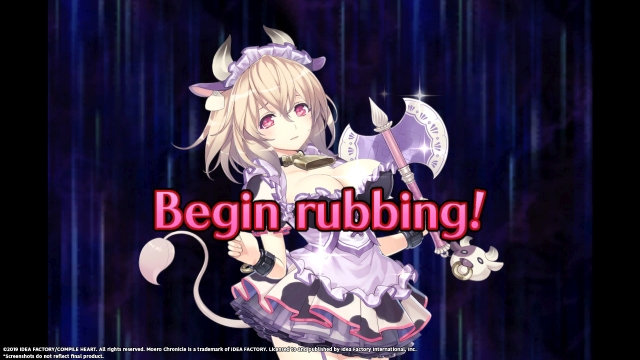 Moero Chronicle H, the Nintendo Switch digital title released on the Nintendo eShop yesterday in Japan, is headed west this spring as Moero Chronicle Hyper (there goes your pet theory that the "H" stood for "harem"), announced publisher Idea Factory International. Finally, players will get the answer to the age old question: "How cute can a monster be?"

The original Moero Chronicle released in Japan and Asia on the PlayStation Vita, and made its western debut on Steam in 2017. It's a dungeon crawler adorned by anime ladies, and the most recent version has been remastered in HD to make everything look that extra bit nicer.

Here's a rundown of key features from today's press release:

The revelation that all original artwork will be included, and the fact Idea Factory saw fit to give "all" the all-caps treatment, should come as welcome news to fans of risque games from Japan as of late, thanks to Sony's recent decision to give publishers grief when they wander very far in "fan service" territory.

Moero Chronicle stars Io, a young man with a big problem: he can't talk to women unless they are monster girls. Now, he must venture through Monstopia, a dangerous region filled with rampaging monster girls. Only he can get to the root of the problem and decide why the monster girls have suddenly become such a nuisance.

The game features heavy emphasis not only on conventional dungeon crawling, but on relationship mechanics. You'll need to build trust with 50 different girls, each with skills and traits all their own. Giving them gifts and improving their homes is sure to bring them around, plus you must "purify" them with the "Bumping Scratch" mini-game as you "find their points of weakness on their body and touch, rub, poke, or pick until they're purified!"

Yep, that sounds like exactly the sort of thing Sony might censor in 2019, but there'll be none of that here. You can touch, rub, poke and pick to your heart's content, apparently.

If you'd like to see the game in action and get an idea just how things come together, check out the rather risque trailer embedded above. You know you want to!

If you enjoyed this Moero Chronicle Hyper article, you're encouraged to discuss it with the author and with other members of the site's community. If you don't already have an HonestGamers account, you can sign up for one in a snap. Thank you for reading!

© 1998-2020 HonestGamers
None of the material contained within this site may be reproduced in any conceivable fashion without permission from the author(s) of said material. This site is not sponsored or endorsed by Nintendo, Sega, Sony, Microsoft, or any other such party. Moero Chronicle Hyper is a registered trademark of its copyright holder. This site makes no claim to Moero Chronicle Hyper, its characters, screenshots, artwork, music, or any intellectual property contained within. Opinions expressed on this site do not necessarily represent the opinion of site staff or sponsors. Staff and freelance reviews are typically written based on time spent with a retail review copy or review key for the game that is provided by its publisher.