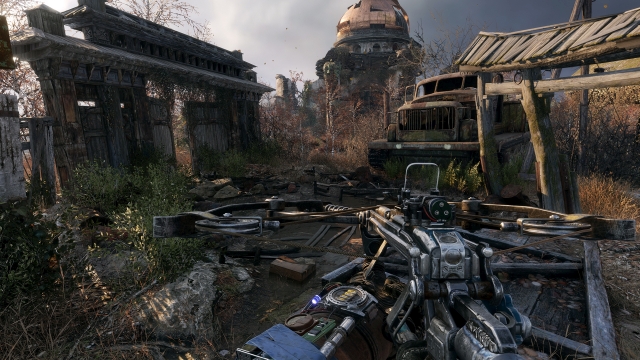 Sorry about the tagline, but obvious jokes are the best jokes.

People at Epic Games and people at Deep Silver must have gotten bored together and started crunching numbers. Or maybe they just really like keeping people guessing. Whatever their motivations, the two publishers today announced an unexpected "partnership" that will see the eagerly anticipated Metro Exodus ditch its Steam ties and arrive exclusively on consoles and the Epic Game Store.

Originally slated for release on Steam, the digital PC edition of the third installment in the sci-fi shooter series is now another feather in the increasingly feathery cap worn by Epic Games. But if you don't care about the new storefront, you might not be entirely out of luck. Today's press release notes that "Any customer with an outstanding pre-order for Metro Exodus on PC through any digital retailer will receive their game as expected."

Over at Epic, founder and CEO Tim Sweeney wasted no time gushing about how awesome this news is for the service. "We are partnering with Deep Silver to launch Metro Exodus," he said, "underpinned by Epic's marketing support and commitment to offering an 88 percent revenue split, enabling game creators to further reinvest in building great games and improving the economics of game stores for everybody."

On PC, Metro Exodus will be priced at $49.99 USD in North America and 59.99 in "most European countries." Those who preorder the game will receive the Metrox Exodus original soundtrack, along with a The World of Metro digital art book.

"We are delighted to partner with Epic to bring the digital PC version of Metro Exodus to market," said Dr. Klemens Kundratitz, CEO at Deep Silver and owner of one of the coolest CEO names ever. "Epic's generous revenue terms are a game changer that will allow publishers to invest more into content creation, or pass on savings to the players. By teaming up with Epic we will be able to invest more into the future of Metro and our ongoing partnership with series developer 4A Games, to the benefit of our Metro fans."

The Metro Exodus announcement comes quite suddenly, not far ahead of the game's February 15 release date. In related news, both Metro 2033 and Metro: Last Light Redux will arrive on the Epic Games store "later this year," though there was no word on whether they will then be pulled from Steam.

If you enjoyed this Metro Exodus article, you're encouraged to discuss it with the author and with other members of the site's community. If you don't already have an HonestGamers account, you can sign up for one in a snap. Thank you for reading!

© 1998-2020 HonestGamers
None of the material contained within this site may be reproduced in any conceivable fashion without permission from the author(s) of said material. This site is not sponsored or endorsed by Nintendo, Sega, Sony, Microsoft, or any other such party. Metro Exodus is a registered trademark of its copyright holder. This site makes no claim to Metro Exodus, its characters, screenshots, artwork, music, or any intellectual property contained within. Opinions expressed on this site do not necessarily represent the opinion of site staff or sponsors. Staff and freelance reviews are typically written based on time spent with a retail review copy or review key for the game that is provided by its publisher.