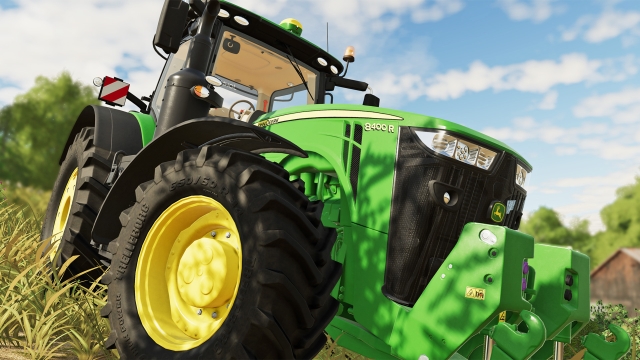 Just competitive country boys and girls gettin' down on the farm. In Europe.

Giants Software announced today it has plans for a second season of fun and prizes that will be awarded throughout Europe, thanks to the creation of a special league linked to Farming Simulator 19, the latest installment in the well known series of farm sims.

Players will participate throughout a season to earn circuit points, and the total prize pool this year is a whopping 250,000, up from whatever it was last year. Those aren't League of Legends- or Overwatch-sized winnings, but Farming Simulator 19 isn't in the same genre. You spend your time baling hay and riding horses, not managing your lanes. Unless maybe you're driving a swather, I guess?

"We have a unique opportunity," says Christian Ammann, CEO of Giants Software and manager of the esports division. "Competitive farming is something people have enjoyed for years now, but it hasn't been done in esports so far. We have lots of esports enthusiasts in our company who can't wait to show the world that farming can indeed be fun and competitive at the same time. We believe we found the right mix of real farming and fun gameplay elements to ensure everyone will find it entertaining."

The Farming Simulator series has been going for quite some time now, and has entertained fans on a variety of platforms. You can see the latest game in action by watching its launch trailer, embedded above.

Farming Simulator 19 is currently available on PlayStation 4, Xbox One, PC and Macintosh. There's no Switch version of the newest entry in the series, but Farming Simulator - Nintendo Switch Edition released in late 2017 and you can certainly play that. Just don't expect to be in the running for a huge cash prize.

If you enjoyed this Farming Simulator 19 article, you're encouraged to discuss it with the author and with other members of the site's community. If you don't already have an HonestGamers account, you can sign up for one in a snap. Thank you for reading!

© 1998-2020 HonestGamers
None of the material contained within this site may be reproduced in any conceivable fashion without permission from the author(s) of said material. This site is not sponsored or endorsed by Nintendo, Sega, Sony, Microsoft, or any other such party. Farming Simulator 19 is a registered trademark of its copyright holder. This site makes no claim to Farming Simulator 19, its characters, screenshots, artwork, music, or any intellectual property contained within. Opinions expressed on this site do not necessarily represent the opinion of site staff or sponsors. Staff and freelance reviews are typically written based on time spent with a retail review copy or review key for the game that is provided by its publisher.