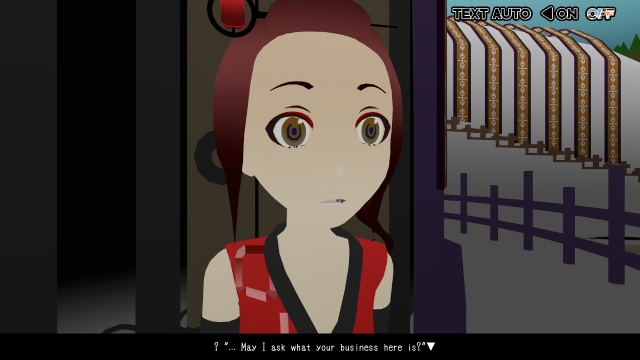 Sony's publishing label Unties will release the game on Switch, PS4 and PC, with VR support.

If occult suspense 3D novels are your thing, Sony publishing label Unties may have a game for you. It is called The Midnight Sanctuary, and it will arrive on Nintendo Switch, PlayStation 4, and Steam on October 4, 2018 with PSVR and Steam VR support following at a later date.

The Midnight Sanctuary introduces players to various people living in the remote Japanese village of Daiusu. They revere a mystic woman known as "The Saint," and have even built a cathedral in her honor. Not only that, but they've invited a famous historian, Hamomuro Tachibana, to investigate their little slice of paradise.

As Tachibana arrives, she plans only to catalog the region's past and perhaps introduce the outside world to the townsfolk. However, she soon witnesses strange events that can't possibly be real: residents appearing and disappearing, leaping off cliffs, and even twisting themselves in half. Obviously, something's not right.

The game features a unique stained glass-style design, which should enhance the mysterious mood. Static 2D textures blend with moving 3D models, which sounds like it could come across as especially bizarre when viewed in VR.

"The mysteries of The Midnight Sanctuary carry many unexpected twists and turns," said John Davis, G&R Representative at Unties. "Cavyhouse has really outdone themselves with the graphics, creating stunning visuals to underline the strange story of Daiusu village."

I couldn't have said it better myself, John, mostly because I haven't played the game. But maybe I will sometime after its release in early October. Then again, maybe not. To be honest, I'm about half decided... which I guess means I have something in common with some of the residents of Daiusu?

[This article was corrected to update its introduction, which incorrectly indicated PSVR support would be available at the game's launch, when that will in fact come at a later date and coincide with VR support on Steam.]

If you enjoyed this The Midnight Sanctuary article, you're encouraged to discuss it with the author and with other members of the site's community. If you don't already have an HonestGamers account, you can sign up for one in a snap. Thank you for reading!

© 1998-2020 HonestGamers
None of the material contained within this site may be reproduced in any conceivable fashion without permission from the author(s) of said material. This site is not sponsored or endorsed by Nintendo, Sega, Sony, Microsoft, or any other such party. The Midnight Sanctuary is a registered trademark of its copyright holder. This site makes no claim to The Midnight Sanctuary, its characters, screenshots, artwork, music, or any intellectual property contained within. Opinions expressed on this site do not necessarily represent the opinion of site staff or sponsors. Staff and freelance reviews are typically written based on time spent with a retail review copy or review key for the game that is provided by its publisher.