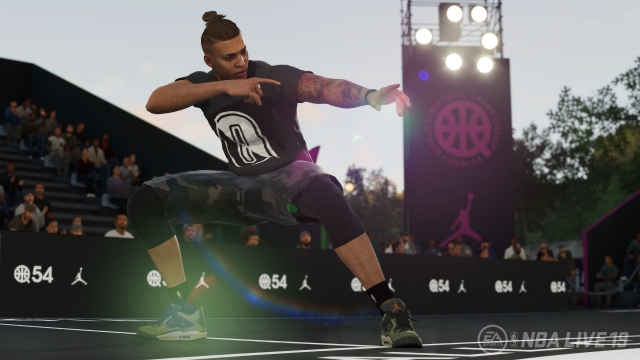 The long-running franchise is back with a new installment for Xbox One and PlayStation 4.

Electronic Arts is back with its latest NBA Live game, NBA Live 19, which evolves its "The One" mechanic and introduces to video game basketball the option to create and customize female players. You can find the game in stores right now, for Xbox One and PlayStation 4.

Developed by EA Tiburon, NBA Live 19 has players build a squad consisting of both NBA and WNBA players, including legends from past seasons. And ballers can face off against each other in Court Battles, with "custom courts with custom rules and unique rewards."

A mode called "The Streets" will let players shoot hoops in the sort of environment that should be familiar to anyone who has thrown a ball at a hoop outside a fancy gym, and "The League" lets players pursue a career for their digital likeness.

"NBA Live 19 brings a truly unique basketball experience to all players at any skill level," said Sean Graddy, Executive Producer, NBA Live 19. "The team added a variety of new features which aims to deliver a whole new level of depth and customization beyond any previous NBA Live game to date. We cannot wait for players to dive in and try out all the new content for themselves."

The name of the game, as has become standard for basketball video games these days, is "customization." Players can build characters from the ground up, in male or female flavors, and can take things a step further by designing their own courts.

If you enjoyed this NBA Live 19 article, you're encouraged to discuss it with the author and with other members of the site's community. If you don't already have an HonestGamers account, you can sign up for one in a snap. Thank you for reading!

© 1998-2020 HonestGamers
None of the material contained within this site may be reproduced in any conceivable fashion without permission from the author(s) of said material. This site is not sponsored or endorsed by Nintendo, Sega, Sony, Microsoft, or any other such party. NBA Live 19 is a registered trademark of its copyright holder. This site makes no claim to NBA Live 19, its characters, screenshots, artwork, music, or any intellectual property contained within. Opinions expressed on this site do not necessarily represent the opinion of site staff or sponsors. Staff and freelance reviews are typically written based on time spent with a retail review copy or review key for the game that is provided by its publisher.