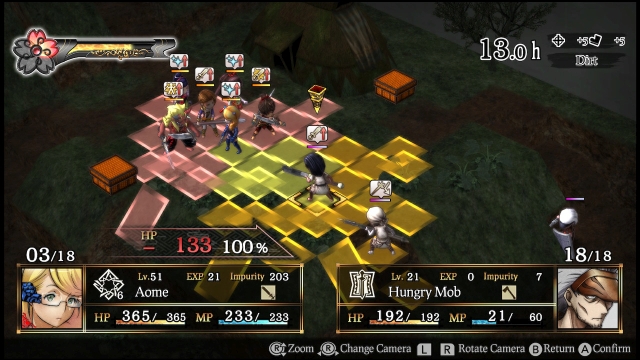 If you own one of the older versions, you can buy some DLC to catch up to your Nintendo brethren.

If you had been waiting to purchase God Wars because it wasn't available on Nintendo Switch, that's fine, but your excuse expired today. NIS America has announced the game is now available in stores, and also shared the launch trailer you'll find embedded below.

Developed by Kadokawa Games, God Wars: The Complete Legend is an SRPG set within a world PR has daringly described as "beautiful" and "lush." Players will face off against armies and do battle with the gods, and there's additional content to coincide with the Switch release.

You must be wondering what the game is all about, and I don't blame you. I kind of wondered too. Then I stumbled across this amazing list of key features in the NIS America press release:

God Wars: Future Past was originally released on PlayStation 4 and Vita in early 2017. If you own one of those older versions, you can purchase new content to catch up to Switch players, on both PlayStation 4 and Vita. Or you can just buy the newest release. NIS America probably wouldn't complain too much...

If you enjoyed this God Wars: The Complete Legend article, you're encouraged to discuss it with the author and with other members of the site's community. If you don't already have an HonestGamers account, you can sign up for one in a snap. Thank you for reading!

© 1998-2020 HonestGamers
None of the material contained within this site may be reproduced in any conceivable fashion without permission from the author(s) of said material. This site is not sponsored or endorsed by Nintendo, Sega, Sony, Microsoft, or any other such party. God Wars: The Complete Legend is a registered trademark of its copyright holder. This site makes no claim to God Wars: The Complete Legend, its characters, screenshots, artwork, music, or any intellectual property contained within. Opinions expressed on this site do not necessarily represent the opinion of site staff or sponsors. Staff and freelance reviews are typically written based on time spent with a retail review copy or review key for the game that is provided by its publisher.