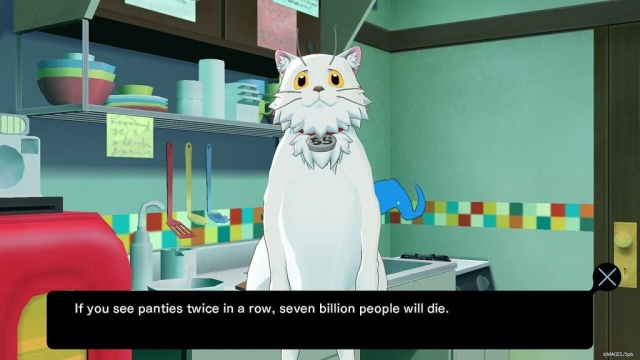 Panties are the name of the game. And the world's destruction too, of course.

PQube announced today that Punch Line, which it is describing as a supernatural visual novel adventure, is available now in Europe. It was created by Kotaro Uchikoshi, who wrote the critically-acclaimed Zero Escape Trilogy.

In Punch Line, players experience life through the eyes of a relatively normal school kid named Yūta Iridatsu. He's not quite typical in one particular respect, though: if he spies a girl's panties, he'll faint.

One day, things go from bad to worse. Yūta is caught in the midst of a bus hijacking incident, where the famed vigilante crime fighter Strange Juice intervenes. Bizarrely, Yūta's soul separates from the body, so that he suddenly is a ghost. But this is just the beginning of the REALLY strange stuff.

Now wandering Earth as a ghost, Yūta can look up skirts and cause "shenanigans" to his heart's content. There's a little problem, though: if he sees too many panties, he gets overly excited and faints and this somehow causes an asteroid to hit Earth and wipe out all life on the planet.

The good news--finally--is that Yūta can travel back in time. He can solve the mystery of the asteroid, determine what turned him into a ghost, figure out why he suddenly has the ability to hop through time, and maybe even find just what it is about fainting at the sight of panties that dooms the human race to oblivion.

PQube promises an immersive adventure, consisting of visual novel elements with 3D environments. You'll haunt a house full of girls and solve puzzles, play tricks and cause trouble. It's apparently all based on an anime you can currently enjoy on Crunchyroll.

Punch Line is currently available for PlayStation Vita and PS4 in Europe, and will reach North America on September 25, 2018. A Stem version is still in development, and was last expected to arrive in late September. The original game made its debut in Japan in 2016, so we're getting something a little bit older than usual, but better late than never, right?

If you enjoyed this Punch Line article, you're encouraged to discuss it with the author and with other members of the site's community. If you don't already have an HonestGamers account, you can sign up for one in a snap. Thank you for reading!

© 1998-2020 HonestGamers
None of the material contained within this site may be reproduced in any conceivable fashion without permission from the author(s) of said material. This site is not sponsored or endorsed by Nintendo, Sega, Sony, Microsoft, or any other such party. Punch Line is a registered trademark of its copyright holder. This site makes no claim to Punch Line, its characters, screenshots, artwork, music, or any intellectual property contained within. Opinions expressed on this site do not necessarily represent the opinion of site staff or sponsors. Staff and freelance reviews are typically written based on time spent with a retail review copy or review key for the game that is provided by its publisher.