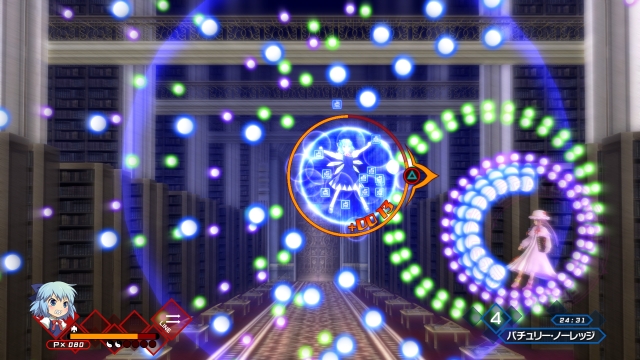 The game is available for 30% off on both the Nintendo and Sony digital storefronts, but only for a limited time.

Sony publishing label Unties announced today the availability of Azure Reflections on Nintendo Switch. The horizontal shooter, which was developed by Souvenir Circ. and release on PC in Japan around a half-decade ago, was also made available on PlayStation 4 earlier this year.

Azure Reflections qualifies as an "unofficial" entry in the Touhou series of shooting games, which the Guinness World Records organization recognizes as the "most prolific fan-made shooter series." That to me feels specific enough that it's only slightly more impressive than my own (admittedly unrecognized) distinction: most prolific contributor of news articles at HonestGamers in August of 2018.

In Azure Reflections, the story is that a mysterious evil is emanating from the Scarlet Devil Manor. You assume the role of Reimu as you investigate the disturbance and dodge barrages of bullets and such. It's typical fare for the Touhou project, which also includes a variety of more official games NIS America has published in the west for various consoles.

As you progress through the game, you can unlock new playable characters, Marisa and Cirno. They possess distinct attributes and special abilities that will allow you to experience the game from a fresh perspective. Any currency you earn can be spent on "adorable" accessories ranging from bunny ears (always useful when you're dodging bullets) to devil wings, mustaches (!) and more.

"Azure Reflections builds on the Touhou Project's rich 20-year history and the Souvenir Circ. development team's experience to create a fresh and exciting new take on the phenomenon," said John Davis, G&R Representative, Unties. "We're proud to bring the game to a new audience with Nintendo Switch today and look forward to having more fans join the fun."

For two weeks (starting today and ending on September 12, 2018), Azure Reflections is available with a 30% discount on both the Nintendo eShop and the PlayStation Store. Its regular price is $24.99, so you'll save around $7.50 if you make your purchase in a hurry. No pressure.

If you enjoyed this Azure Reflections article, you're encouraged to discuss it with the author and with other members of the site's community. If you don't already have an HonestGamers account, you can sign up for one in a snap. Thank you for reading!

© 1998-2020 HonestGamers
None of the material contained within this site may be reproduced in any conceivable fashion without permission from the author(s) of said material. This site is not sponsored or endorsed by Nintendo, Sega, Sony, Microsoft, or any other such party. Azure Reflections is a registered trademark of its copyright holder. This site makes no claim to Azure Reflections, its characters, screenshots, artwork, music, or any intellectual property contained within. Opinions expressed on this site do not necessarily represent the opinion of site staff or sponsors. Staff and freelance reviews are typically written based on time spent with a retail review copy or review key for the game that is provided by its publisher.