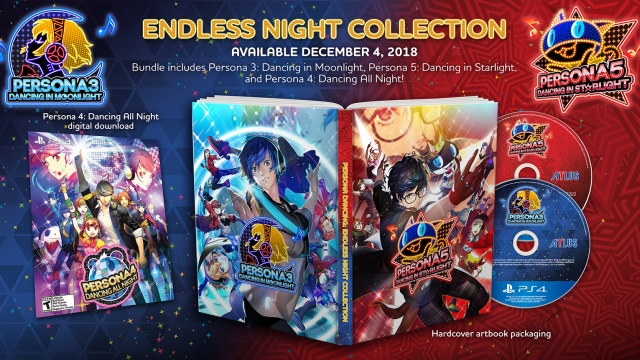 Fans of Persona music and rhythm game action have a lot to be excited about this December.

Atlus today released a new teaser trailer showcasing music that will appear in Persona 3: Dancing in Moonlight and Persona 5: Dancing in Starlight when they arrive later this year on PlayStation 4 and Vita. Each game will feature 25 songs, including fan favorites and remixes.

In the new trailer, you'll see some of the remixes: "Want To Be Close (ATOLS Remix)" and "Last Surprise (Jazztronik Remix)", so make sure to enjoy the trailer if you have a minute. It is embedded below.

Atlus also outlined details about how you'll be able to buy the games, and you do have a variety of options based on platform and games desired.

First of all, you can purchase Persona 3: Dancing in Moonlight or Persona 5: Dancing in Starlight as standalone games. They'll retail for $39.99 USD apiece on PlayStation Vita, or $59.99 USD on PlayStation 4. The games are available digitally and in physical formats.

If you already know you want both games, it makes a lot more sense to buy them together, in the Persona Dancing: Endless Night Collection bundle. It includes both games for $69.99 USD (on Vita) or $99.99 USD (PlayStation 4).

However, that's not all. If you purchase the bundle, you will also receive a digital download code for Persona 4: Dancing All Night, which has not previously been made available for purchase in North America on the PlayStation 4 hardware. It's a great way to pick up the entire trilogy while saving a little money in the process. The bundle also is being shipped in a hardcover artbook package with character art from Shigenori Soejima.

Persona 3: Dancing in Moonlight, Persona 5: Dancing in Starlight and Persona Dancing: Endless Night Collection will all be available in stores starting December 4, 2018, but you can pre-order them now from major online retailers.Oh, and in case you're worried about voice options, don't; the games will include dual audio for English and Japanese versions, plus subtitles for English, French, Italian, German and Spanish. Atlus has your back!

If you enjoyed this Persona Dancing: Endless Night Collection article, you're encouraged to discuss it with the author and with other members of the site's community. If you don't already have an HonestGamers account, you can sign up for one in a snap. Thank you for reading!

© 1998-2020 HonestGamers
None of the material contained within this site may be reproduced in any conceivable fashion without permission from the author(s) of said material. This site is not sponsored or endorsed by Nintendo, Sega, Sony, Microsoft, or any other such party. Persona Dancing: Endless Night Collection is a registered trademark of its copyright holder. This site makes no claim to Persona Dancing: Endless Night Collection, its characters, screenshots, artwork, music, or any intellectual property contained within. Opinions expressed on this site do not necessarily represent the opinion of site staff or sponsors. Staff and freelance reviews are typically written based on time spent with a retail review copy or review key for the game that is provided by its publisher.