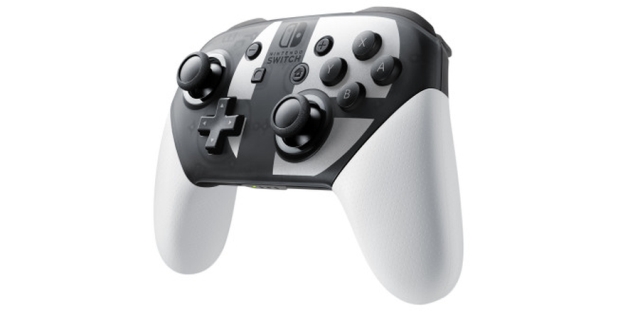 If you want to play the game in style, prepare to spend a little extra green this December.

Nintendo this morning issued a press release to let members of the press know about various special bundles the company will be releasing near the Christmas holiday. These include special editions for games new and old, one with a collectible controller, and also new hardware bundles for the 2DS handheld.

The star of the show was arguably Super Smash Bros. Ultimate, which will be released on December 7, 2018. You can get the standard edition, of course, which includes just the game. Or you can spend $139.99 USD and obtain the game in a steel case with a new Nintendo Switch Pro Controller (pictured above).

If you would like the controller by itself, that will also be an option. The Nintendo Switch Pro Controller with the snazzy color and markings will be available for $74.99 USD. Nintendo is not cutting fans a break with this pricing, but then, it doesn't have to; everyone will want all this stuff, anyway.

As noted above, there was more to the announcement than just Super Smash Bros. Ultimate news. Nintendo also revealed that it will make "starter pack" editions of The Legend of Zelda: Breath of the Wild, Super Mario Odyssey and Splatoon 2. They will each retail for $59.99 USD and will come with "a colorful strategy guide." Hopefully, the strategy guides will also be good. That would be just lovely. Anyway, you won't have to wait long to find out. The starter packs will be available starting September 28.

Finally, Nintendo revealed a Nintendo 2DS XL bundle that will come--also on September 28--in purple and silver and will include a pre-installed copy of Mario Kart 7, at an MSRP of $149.99 USD. New units manufactured in the existing color schemes for that hardware (black/turquoise and white/orange) will also be produced with the same game loaded onto them.

"We want to give people a variety of options and price points when shopping for themselves or the Nintendo fans in their lives," said Reggie Fils-Aime. "Whether looking for a portable system for a first-time gamer or a cool controller to play Super Smash Bros. Ultimate, Nintendo has great gifts for all ages this holiday season."

If you have a pre-order in place for Super Smash Bros. Ultimate, you might want to scrap that and get the version that ships with the controller. Then again, you might not. But now you know it is coming. Now you will be ready to play... with power!

If you enjoyed this Super Smash Bros. Ultimate article, you're encouraged to discuss it with the author and with other members of the site's community. If you don't already have an HonestGamers account, you can sign up for one in a snap. Thank you for reading!

© 1998-2020 HonestGamers
None of the material contained within this site may be reproduced in any conceivable fashion without permission from the author(s) of said material. This site is not sponsored or endorsed by Nintendo, Sega, Sony, Microsoft, or any other such party. Super Smash Bros. Ultimate is a registered trademark of its copyright holder. This site makes no claim to Super Smash Bros. Ultimate, its characters, screenshots, artwork, music, or any intellectual property contained within. Opinions expressed on this site do not necessarily represent the opinion of site staff or sponsors. Staff and freelance reviews are typically written based on time spent with a retail review copy or review key for the game that is provided by its publisher.