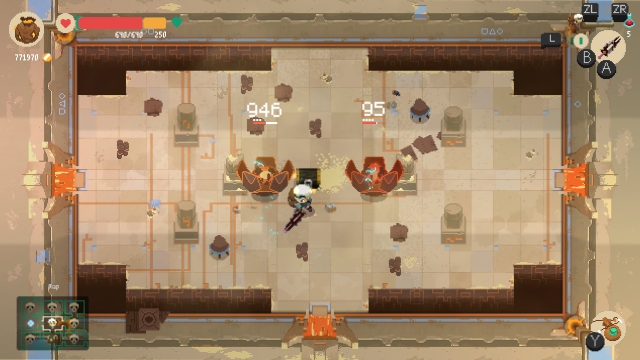 The indie developer and publisher will release several promising titles over the months leading into early 2019.

11 bit studios has announced plans to publish four digital titles on Nintendo Switch, starting with a couple of fall releases and proceeding from there through early 2019. The games hail from a variety of genres and developers.

First up is Moonlighter, an action-RPG about an adventurous shopkeeper with dreams of being something more. You'll need to manage your business but also head out to dungeons for a hands-on approach to resource gathering. Roguelite elements are featured in the game, which is already available on PlayStation 4 and met with a favorable response from critics. A physical edition on Switch will come in late September, with the announced digital version to follow this Fall.

This War of Mine, a familiar indie darling depicting the struggle of civilians in a war-torn city, is due to reach Nintendo Switch this November. Deep Silver will cooperate as a publisher, and the digital "Complete Edition" will include all DLC released thus far, as well as any content released at a later date.

Then there is Beat Cop, an adventure sim set in New York City. It takes its cues from 80s cop shows and casts the player as a policeman named Jack Kelly who has been framed for murder. You'll have to investigate to find the culprit, while navigating the streets of Brooklynn and encountering dark humor at every step.

Finally, Children of Morta is due in early 2019 and is described in today's press release as a "narrative-driven roguelike," which isn't quite the usual approach. Players can adventure alone or as a cooperative team, as they fight to defend their legacy from the forces of evil.

Crunching Koalas has been assigned the task of porting This War of Mine and Beat Cop to Switch, while the Moonlighter and Children of Morta ports are in development at the studios from which they originate. Check the embedded trailer above for an early look at the games in action, and check back later to see if we have anything more to show.

If you enjoyed this Moonlighter article, you're encouraged to discuss it with the author and with other members of the site's community. If you don't already have an HonestGamers account, you can sign up for one in a snap. Thank you for reading!

© 1998-2020 HonestGamers
None of the material contained within this site may be reproduced in any conceivable fashion without permission from the author(s) of said material. This site is not sponsored or endorsed by Nintendo, Sega, Sony, Microsoft, or any other such party. Moonlighter is a registered trademark of its copyright holder. This site makes no claim to Moonlighter, its characters, screenshots, artwork, music, or any intellectual property contained within. Opinions expressed on this site do not necessarily represent the opinion of site staff or sponsors. Staff and freelance reviews are typically written based on time spent with a retail review copy or review key for the game that is provided by its publisher.