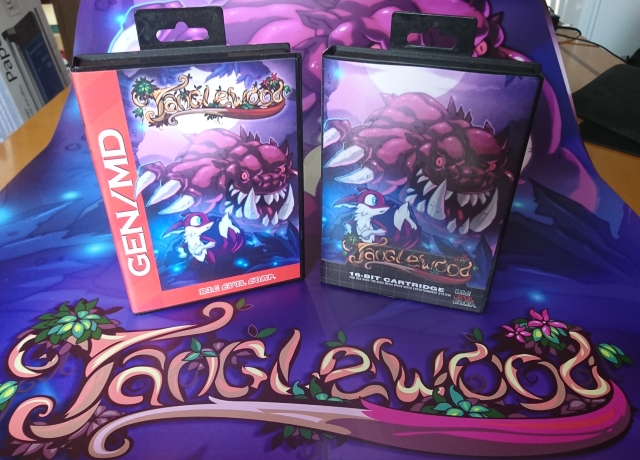 You can even buy the game with packaging modeled after classic Genesis releases, if you're so inclined.

Big Evil Corporation, the indie developer with a name you can trust, today released a new puzzle/platformer title for Mega Drive/Genesis and Steam. Called Tanglewood, the game is digitally and as a physical product in online stores, ensuring you can pick it up for as little as £13.95 / $17.99 USD / 14.95, or for as much as £54.00 if you find yourself completely in love with the idea of owning another cartridge.

According to the press release issued to mark the occasion, Tanglewood is "a genuine 16-bit experience, produced using original 1990s SEGA development tools and programmed in pure 68000 assembly language." The man in charge of the development, Matt Phillips, should know; he has worked for a variety of publishers through the years, including Traveller's Tales and Crytek.

"My aim for Tanglewood was to create it in the same way as my favourite games from my childhood," said Phillips. "This idea has been brewing since I was nine years old -- the kid in me has long wanted to see my very own Mega Drive box on a store shelf."

Tanglewood is playable on PAL, NTSC and NTSC-J consoles, so region locking isn't likely to prove an issue. If you purchase the Steam version of the game, you also get a Mega Drive ROM file so you can load it to a flash cartridge and play it on original SEGA hardware, as intended.

"Tanglewood is the culmination of 25 years of gaming influences, as well as a love letter to every 1990s gem, and to every 2D platformer that captured my imagination," Phillips added. "A great big thank you, too, to SEGA, for inspiring me to enter the world of video games development."

You can find more about the game at its official site, where the game is also available for order. Are you interested in playing a new 16-bit platformer on your old hardware?

If you enjoyed this Tanglewood article, you're encouraged to discuss it with the author and with other members of the site's community. If you don't already have an HonestGamers account, you can sign up for one in a snap. Thank you for reading!

© 1998-2020 HonestGamers
None of the material contained within this site may be reproduced in any conceivable fashion without permission from the author(s) of said material. This site is not sponsored or endorsed by Nintendo, Sega, Sony, Microsoft, or any other such party. Tanglewood is a registered trademark of its copyright holder. This site makes no claim to Tanglewood, its characters, screenshots, artwork, music, or any intellectual property contained within. Opinions expressed on this site do not necessarily represent the opinion of site staff or sponsors. Staff and freelance reviews are typically written based on time spent with a retail review copy or review key for the game that is provided by its publisher.