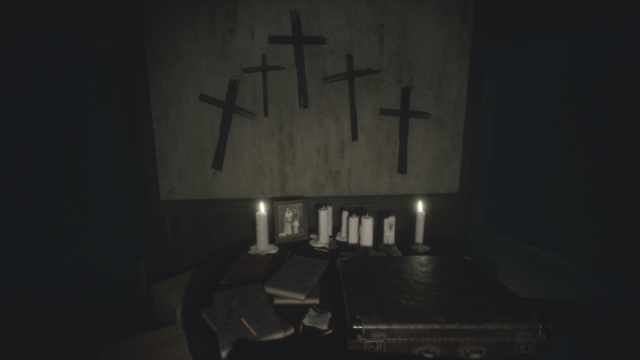 Why would you want to be alone or feel safe when you can have a nefarious entity watching you instead?

Iceberg Interactive today announced that it is working with Lazarus Studio, a new indie developer. Together, the publisher and studio will release Lunacy: Saint Rhodes, which despite its cheerful sounding name is not a kitten simulator. No, it's something much less expected: a creepy horror game.

The hook in Lunacy: Saint Rhodes (or at least, one of the hooks) is "the Author," an advanced AI that adapts the game's play style to suit player behavior. This is intended to ensure no two trips through the game ever feel quite the same.

As the game's protagonist, you will venture to the town of Silent Hi-- Saint Rhodes. Your family was horrifically murdered, so you have returned to your ancestral home in search of answers you may not be prepared to accept. A malevolent force watches from the shadows.

Early screenshots don't show much, because there's a lot of shadow and darkness befitting the genre. Apparently, the full game will allow you to venture beyond the walls of your home, into streets patrolled by frightening creatures. Each visit to the town will be different, with non-linear paths leading to various outcomes.

Though Lunacy: Saint Rhodes won't actually release until 2019, you can add it to your wish list on Steam this very day... if you dare!

If you enjoyed this Lunacy: Saint Rhodes article, you're encouraged to discuss it with the author and with other members of the site's community. If you don't already have an HonestGamers account, you can sign up for one in a snap. Thank you for reading!

© 1998-2020 HonestGamers
None of the material contained within this site may be reproduced in any conceivable fashion without permission from the author(s) of said material. This site is not sponsored or endorsed by Nintendo, Sega, Sony, Microsoft, or any other such party. Lunacy: Saint Rhodes is a registered trademark of its copyright holder. This site makes no claim to Lunacy: Saint Rhodes, its characters, screenshots, artwork, music, or any intellectual property contained within. Opinions expressed on this site do not necessarily represent the opinion of site staff or sponsors. Staff and freelance reviews are typically written based on time spent with a retail review copy or review key for the game that is provided by its publisher.