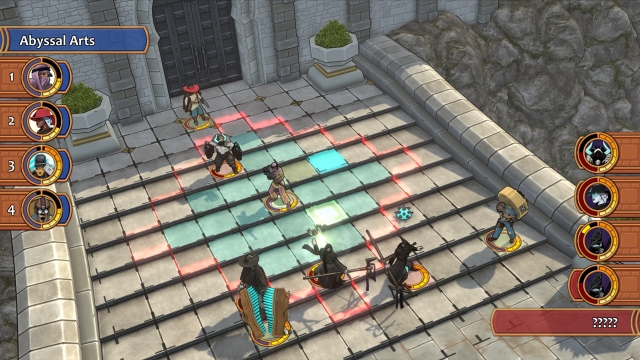 If you play City of the Shroud quickly enough, you will help decide how its story progresses.

Abyssal Arts today launched the first of four chapters that will eventually tell the complete story of City of the Shroud, a tactical RPG arriving first on digital storefronts for PC/Mac and later on PlayStation 4 and Xbox One. The developer calls the game an experiment because the team will allow the actions of early players to determine the outcome of the overall plot.

"PC gamers who join in the fun of chapter one prior to the development of chapter two will make decisions that impact who lives, who dies and who rises to power in a truly player-driven narrative," notes a press release issued earlier today to announce the game's arrival on Steam and the Humble Bundle store. "The community's collective in-game actions will be the key driver for future episodes written by the developers, including Amazon bestselling author Moira Katson and former Capcom production manager Keaton White."

The game invites players to Iskendrun, a city that is shut off from the outside world even as it deals with evil sorcery that is spreading through its streets like a plague. Players are thrown in the middle of the chaos as five faction leaders struggle for power and the citizens look for a savior.

The press release highlights the development team's intention to produce fast-paced tactical battles, which marry strategy with fighting game conventions to create what sounds like a unique affair.

"Although the titans of turn-based, tactical RPGs are an inspiration," says Keaton White, founder of Abyssal Arts, "we also wanted these battles to play out to a much faster beat. Players of City of the Shroud will get strategic combat at a pace that keeps up with their interest in the politics of a city on the verge of doom."

Check out a trailer for the game, embedded above, and decide whether you're sufficiently interested in the experiment to risk $19.99 USD. If you make that investment, you'll receive the full game, but keep in mind that subsequent chapters will be playable only as they are completed. The promised console versions of the game are expected to arrive sometime in 2019, in a definitive package that doesn't yet appear to have an MSRP.

If you enjoyed this City of the Shroud article, you're encouraged to discuss it with the author and with other members of the site's community. If you don't already have an HonestGamers account, you can sign up for one in a snap. Thank you for reading!

© 1998-2020 HonestGamers
None of the material contained within this site may be reproduced in any conceivable fashion without permission from the author(s) of said material. This site is not sponsored or endorsed by Nintendo, Sega, Sony, Microsoft, or any other such party. City of the Shroud is a registered trademark of its copyright holder. This site makes no claim to City of the Shroud, its characters, screenshots, artwork, music, or any intellectual property contained within. Opinions expressed on this site do not necessarily represent the opinion of site staff or sponsors. Staff and freelance reviews are typically written based on time spent with a retail review copy or review key for the game that is provided by its publisher.