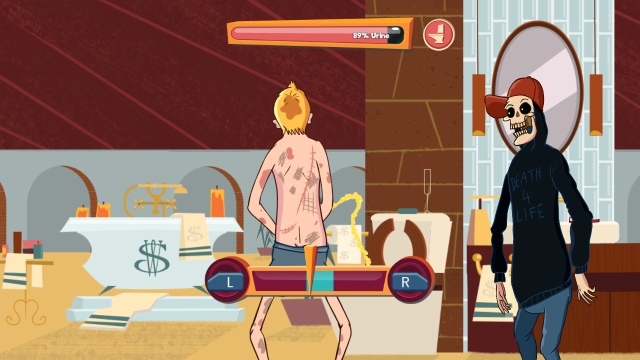 The game sounds like it could be a breath of fresh air... if you remember to press the right buttons.

In 2010, David Cage released an interactive adventure called Heavy Rain, which was memorable for (among other reasons) the fact that you could fail one of its scenes because you couldn't quite brush your teeth right or turn a doorknob. Those moments felt out of place and more than a little frustrating because of it, but now there's a whole game dedicated to such moments and it is coming to Nintendo Switch.

The game's premise is that you are a spoiled rich boy named Samuel who died in a car crash but got a new lease on life, courtesy of Death. If you want to avoid an early trip to hell, you have to survive an entire day while manually controlling your body's functions in a variety of scenarios.

"Players will have to deliberately manage Samuel's walking, blinking, exhaling, and inhaling if they're to guide this hilariously helpless human through an exciting day of getting dressed, drinking coffee, going to work, and navigating whatever hijinks ensue for a person incapable of peeing without the deepest of concentration and ninja-like reflexes," states a press release that was distributed earlier today.

Manual Samuel isn't a new game. It arrived on PlayStation 4, PC and Xbox One in October of 2016, after all. But it is new to Nintendo hardware and it looks like just the sort of thing that could interest those who missed out the first time around.

Though Manual Samuel didn't delight critics when it made its unusual debut, it does seem particularly well suited for the Switch platform. There's even a co-op mode, so that two players can work together to guide Samuel's body through what seems like it would almost have to be a memorable day of chores we otherwise would classify as mundane.

Look for Manual Samuel to arrive on the Nintendo eShop on August 16, 2018. It's actually available right now for pre-purchase, with an MSRP of $9.99 USD, just in case you're that enthused about sparing Samuel that unfortunate trip to the afterlife.

If you enjoyed this Manual Samuel article, you're encouraged to discuss it with the author and with other members of the site's community. If you don't already have an HonestGamers account, you can sign up for one in a snap. Thank you for reading!

© 1998-2020 HonestGamers
None of the material contained within this site may be reproduced in any conceivable fashion without permission from the author(s) of said material. This site is not sponsored or endorsed by Nintendo, Sega, Sony, Microsoft, or any other such party. Manual Samuel is a registered trademark of its copyright holder. This site makes no claim to Manual Samuel, its characters, screenshots, artwork, music, or any intellectual property contained within. Opinions expressed on this site do not necessarily represent the opinion of site staff or sponsors. Staff and freelance reviews are typically written based on time spent with a retail review copy or review key for the game that is provided by its publisher.