The Low Road preps a bit of espionage for Nintendo Switch 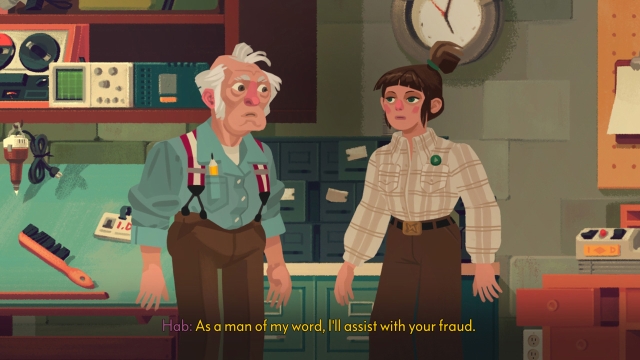 The port of the acclaimed point-and-click game will feature several enhancements. Admit it: you're intrigued now!

The 1970s concluded a long time ago, but they still inspire imaginative looks at things we don't see today, such as greed and corruption and espionage. One such look is The Low Road, an upcoming release for Nintendo Switch.

Originally released on PC in mid-2017, The Low Road is a point-and-click adventure set within the automotive industry. Players are introduced to corporate spies who try to protect trade secrets while (apparently) stealing secrets from other companies.

Key features include more than 32,000 words of fully voiced dialogue, an original score that sounds like it should be true to the period, point-and-click gameplay inspired by classics from developers such as LucasArts and Sierra, branching conversation puzzles, and even some first-person puzzle segments to break up the more conventional action.

XGen Studios hasn't been as prolific as some teams, but it has produced some previous titles you might remember, including Defend Your Castle for Nintendo Wii and Super Motherload for PlayStation 4.

The Low Road may not be a completely new title, if you want to get technical about it, but it's recent and the developer promises "enhanced gameplay mechanics that take advantage of both the JoyCon and Pro Controller," just the way you probably like things. The goal apparently was to provide a smoother gameplay experience overall, and today's press release mentioned background saving and reworked voice acting, among other enhancements.

The Low Road is due to reach the eShop on August 23, 2018 in North America, and it looks like it could be worth a look if you're into comedic graphic adventures and such. There are still plenty of people who like those, right?

If you enjoyed this The Low Road article, you're encouraged to discuss it with the author and with other members of the site's community. If you don't already have an HonestGamers account, you can sign up for one in a snap. Thank you for reading!

© 1998-2020 HonestGamers
None of the material contained within this site may be reproduced in any conceivable fashion without permission from the author(s) of said material. This site is not sponsored or endorsed by Nintendo, Sega, Sony, Microsoft, or any other such party. The Low Road is a registered trademark of its copyright holder. This site makes no claim to The Low Road, its characters, screenshots, artwork, music, or any intellectual property contained within. Opinions expressed on this site do not necessarily represent the opinion of site staff or sponsors. Staff and freelance reviews are typically written based on time spent with a retail review copy or review key for the game that is provided by its publisher.