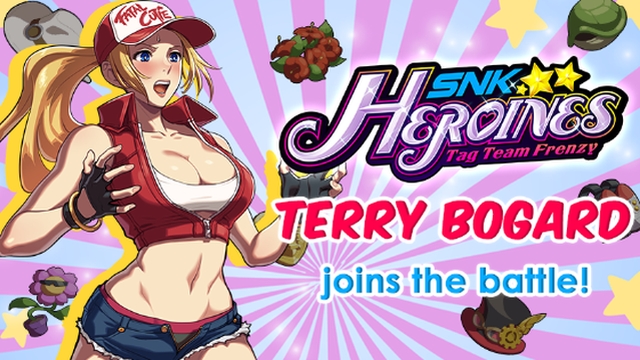 Luckily, we're here with a news story to keep you abreast of the situation.

Terry Bogard has appeared in enough SNK fighting games through the years that gamers probably wouldn't feel comfortable with a roster that didn't include the legendary character. At least, that's what SNK Playmore must have thought, because it brought the warrior to its all-female fighting game, SNK Heroines: Tag Team Frenzy.

Currently in development for Nintendo Switch, PlayStation 4, and arcades, SNK Heroines: Tag Team Frenzy features a variety of ladies who are more than ready to kick butt. After all, they've been doing precisely that in a variety of SNK franchises for decades now. But Terry has always been portrayed as a guy... until now.

As you can see from the artwork above, Terry is ready to join the assembled crew. His cap is back. His tight abs are back. And his boobs are... well, his boobs are new. But maybe he can make them work.

Here's what a notice sent to press earlier today had to say about Terry's situation:

"The legendary Terry Bogard joins the roster in SNK Heroines: Tag Team Frenzy! Wait a second, THE Terry Bogard? What happened to him!? Well, that's what he'd like to know too. You can check out her(?) official trailer now."

SNK Heroines: Tag Team Frenzy arrives on the world stage on September 7, 2018, and NIS America hints that more surprises could be on the way. What would you like to see be revealed next?

If you enjoyed this SNK Heroines: Tag Team Frenzy article, you're encouraged to discuss it with the author and with other members of the site's community. If you don't already have an HonestGamers account, you can sign up for one in a snap. Thank you for reading!

© 1998-2020 HonestGamers
None of the material contained within this site may be reproduced in any conceivable fashion without permission from the author(s) of said material. This site is not sponsored or endorsed by Nintendo, Sega, Sony, Microsoft, or any other such party. SNK Heroines: Tag Team Frenzy is a registered trademark of its copyright holder. This site makes no claim to SNK Heroines: Tag Team Frenzy, its characters, screenshots, artwork, music, or any intellectual property contained within. Opinions expressed on this site do not necessarily represent the opinion of site staff or sponsors. Staff and freelance reviews are typically written based on time spent with a retail review copy or review key for the game that is provided by its publisher.