Tempest 4000 blasts its way to retail next week 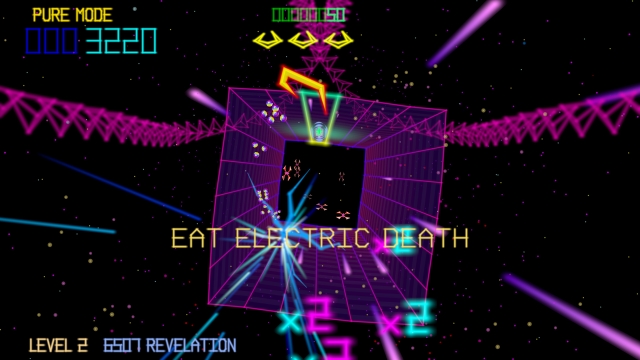 Atari and industry legend Jeff Minter seem to have settled their unfortunate feud.

A few years ago, Llamasoft founder Jeff Minter (best known for his work on Tempest 2000 and numerous games of a similar nature that have followed) and Atari were engaged in a nasty dispute that was bad for everyone. Now they are on speaking terms again, and one result of that new peace is the impending arrival of Tempest 4000 on PlayStation 4, Xbox One and PC late next week.

The feud dates back to 2015, when Minter's studio was preparing to release a game called TxK on a variety of platforms following its early critical success in the narrower Vita marketplace. Atari sent its lawyers into the fray, alleging the game was too similar to Tempest 2000 and couldn't have been created unless Minter had privileged access to that original source code.

The accusation was interesting, maybe even a little silly, since Minter was the one who coded Tempest 2000 and would obviously have had access. His response to Atari hostilities was to point out that Atari had already established a history of changing games just enough that it could release "new" installments in the series without paying Minter the royalties he otherwise was owed.

There's additional information at Kotaku, and other sites besides. The story was all over the news for a day or two, especially since Atari also requested that TxK be removed from the PlayStation store and tried to bar Minter from making any additional games related to the license, however indirectly.

In any event, hostilities seem to have ended, for reasons that aren't entirely clear. Perhaps the current owners of the Atari brand and IP simply are more interested in mining the past for tomorrow's hits, or maybe they're nicer people. The long and short of it is that Tempest 4000 is coming to the platforms mentioned above and will even be available as a physical release for consoles.

Here is a quick list of features, straight from the press release:

If you enjoyed this Tempest 4000 article, you're encouraged to discuss it with the author and with other members of the site's community. If you don't already have an HonestGamers account, you can sign up for one in a snap. Thank you for reading!

© 1998-2020 HonestGamers
None of the material contained within this site may be reproduced in any conceivable fashion without permission from the author(s) of said material. This site is not sponsored or endorsed by Nintendo, Sega, Sony, Microsoft, or any other such party. Tempest 4000 is a registered trademark of its copyright holder. This site makes no claim to Tempest 4000, its characters, screenshots, artwork, music, or any intellectual property contained within. Opinions expressed on this site do not necessarily represent the opinion of site staff or sponsors. Staff and freelance reviews are typically written based on time spent with a retail review copy or review key for the game that is provided by its publisher.