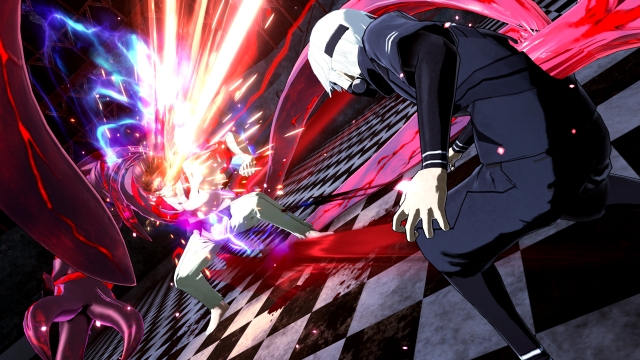 The release marks the first time North American gamers will be able to play a localized game based on the popular IP.

Bandai Namco is bringing Tokyo Ghoul:re Call to Exist west, the company announced this morning in a press release. The game is based on the manga series and features online co-op play (potentially making it perfect for a market that can't seem to get enough of that sort of thing).

According to the release, fans will choose to fight on behalf of either Ghouls or Investigators. They'll battle friends and strangers online in "gruesome battles to the death." The experience sounds like it will consist largely of conventional deathmatch events, but with a manga-style aesthetic.

Tokyo Ghoul:re Call to Exist includes characters from a variety of related properties, including Tokyo Ghoul, Tokyo Ghoul √A and Tokyo Ghoul:re, so there's a decent chance any favorite heroes or villains you might have will make an appearance and probably be playable.

"In bringing a Tokyo Ghoul game to the West, it was important to stay true to the source material and feature popular characters, the manga's worldview, and the unique atmosphere drawn from across the franchise," says Abelina Villegas, of Bandai Namco Entertainment America Inc. "Tokyo Ghoul:re Call to Exist encapsulates the spirit of the popular dark fantasy manga franchise presented through ghastly graphics and fast paced gameplay we know fans will love."

Bandai Namco has for years produced games based on a variety of IP, including One Piece, Dragon Ball Z and Sword Art Online, so this upcoming release should fit right in with those various others. Tokyo Ghoul is scheduled for release in 2019 on PlayStation 4 and Steam. Are you ready for a Tokyo Ghoul video game?

If you enjoyed this Tokyo Ghoul:re Call to Exist article, you're encouraged to discuss it with the author and with other members of the site's community. If you don't already have an HonestGamers account, you can sign up for one in a snap. Thank you for reading!

© 1998-2020 HonestGamers
None of the material contained within this site may be reproduced in any conceivable fashion without permission from the author(s) of said material. This site is not sponsored or endorsed by Nintendo, Sega, Sony, Microsoft, or any other such party. Tokyo Ghoul:re Call to Exist is a registered trademark of its copyright holder. This site makes no claim to Tokyo Ghoul:re Call to Exist, its characters, screenshots, artwork, music, or any intellectual property contained within. Opinions expressed on this site do not necessarily represent the opinion of site staff or sponsors. Staff and freelance reviews are typically written based on time spent with a retail review copy or review key for the game that is provided by its publisher.