Nicalis serves up a date for Blade Strangers 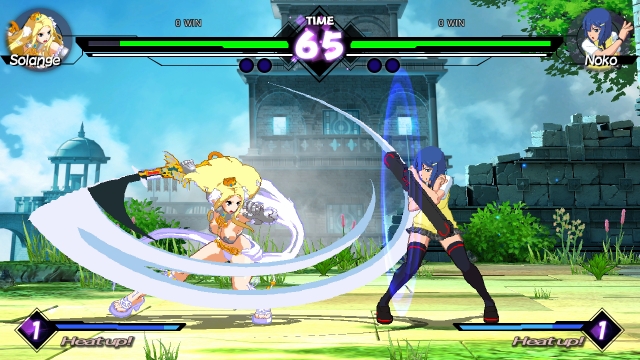 You'll be able to play the mascot-based brawler before the summer concludes.

For some time now, we've known the mascot-packed Blade Strangers would arrive this summer. Publisher Nicalis, Inc. has now weighed in with a more official date for the game, which will arrive for Nintendo Switch, PlayStation 4 and Steam (as well as in arcades over in Japan) on August 28, 2018.

Developed by Studio Saizensen, Blade Strangers gathers together characters from a variety of semi-recent indie darlings, even some that feature characters you might not expect to be able to successfully mix it up in a one-on-one arena. The game features what its developer calls a "traditional and streamlined four-button control scheme," with the goal being to allow entry-level players to have a good time while providing depth for the sort of people who study hitboxes and skipped frames.

Making appearances in the game are Isaac (The Binding of Isaac: Afterbirth+), Quote and Curly Brace (Cave Story+), Kawase, Noko and Emiko (the Umihara Kawase series), and even Shovel Knight (from Shovel Knight, duh) and Gunvolt (from the Gunvolt games). Solange (who is best known for kicking butt whilst garbed in what looks like a skimpy metal bikini in Code of Princess EX) and her friends are also on board.

Nicalis calls the above crew the "launch roster," which additionally includes newcomers Lina and Helen. This suggests that additional mascots and potentially original characters will come to the game down the road, via updates, though the press release didn't mention a schedule or pricing for any additions.

Look for Blade Strangers on the aforementioned platforms on August 28, 2018, with an MSRP of $39.99 USD. Launch copies of the game's physical versions will apparently include "surprise bonus goodies," as has become a Nicalis, Inc. tradition that I wouldn't mind seeing continue indefinitely.

If you enjoyed this Blade Strangers article, you're encouraged to discuss it with the author and with other members of the site's community. If you don't already have an HonestGamers account, you can sign up for one in a snap. Thank you for reading!

© 1998-2020 HonestGamers
None of the material contained within this site may be reproduced in any conceivable fashion without permission from the author(s) of said material. This site is not sponsored or endorsed by Nintendo, Sega, Sony, Microsoft, or any other such party. Blade Strangers is a registered trademark of its copyright holder. This site makes no claim to Blade Strangers, its characters, screenshots, artwork, music, or any intellectual property contained within. Opinions expressed on this site do not necessarily represent the opinion of site staff or sponsors. Staff and freelance reviews are typically written based on time spent with a retail review copy or review key for the game that is provided by its publisher.