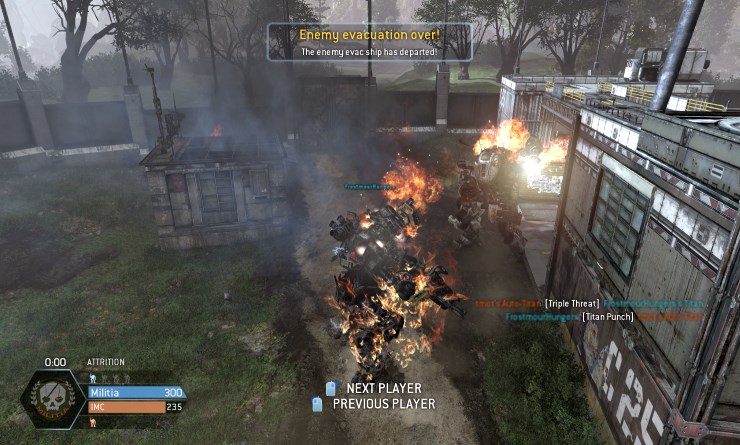 A while back, I posted a review of Titanfall. It was a positive review. I arrived on the scene a little late, after the initial hype had worn off and the metagame was already well-established, but I found that it still held up pretty well a few years after the fact.

However, now that Titanfall 2 has dropped, things have changed. As expected, the playerbase has dwindled from its previously less-than-ideal average of 800 online players to under 200, which is pretty abysmal. This means less servers and less available game modes, unless you happen to have friends available to organize private servers with. Thankfully, the Attrition, Frontier Defense and Campaign lobbies are still quite active and you still don't have to wait long to find a match.

However, the bigger problem now is the abundance of hackers. Now that there are fewer servers to choose from, it is inevitable that every single time you play you will encounter at least one of these fuckers, and they will gleefully make your life hell. Aimbotting seems to be the most popular type of hack, though I have spotted people tracking players through walls in ESP-type fashion in the absence of any burncards that would allow for this.

The good news is that the devs still do pay attention to the game, and they will ban these idiots if enough people spam them with reports. However, some of the really obvious and blatant hackers still seem to slip through Respawn's fingers for reasons that baffle and confuse me.

The other problem is that hackers are like weeds; pull one out and another one inevitably replaces them. I suspect that this is largely due to the fact that the price of the game has dropped to a paltry $20, which is not much of a deterrent to keep away the dedicated trolls who have a disposable income or daddy's credit card on hand.

I also imagine that the bumper crop of hackers is due to the fact Titanfall 2 is a tougher nut to crack, as it employs the "FairFight" anti-cheat system, whereas Titanfall stopped receiving updates a long time ago and is an easier target. It stands to reason that troublemakers will follow the path of least resistance to get their douchebag fix, and will likely stick to the games that they know they can break.

Unfortunately, having an abundance of hackers is one of the fastest ways to chase off a legitimate playerbase, and the ranks are already looking thin. I suppose that Titanfall had a good run, although three years seems like a bit of a short window for AAA title to reach its zenith and ultimately come to a close. It's a bit of a shame, as I was hoping to continue to play it for a while, as I cannot currently afford Titanfall 2 or the upgrades I will need in order to play it. However, once I manage to raise the money, I imagine I will migrate to Titanfall 2 and never look back.