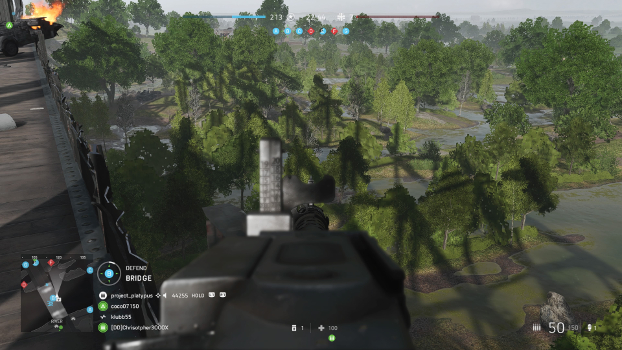 What's this? I'm reviewing a game in a somewhat timely fashion? I know. Shocking.

I've been a fan of the Battlefield series since its unfortunately janktacular debut on PS2, and so, with Battlefield 5 now out in the wild, I feel it's time I finally wrote something about one of my favourite series. Unfortunately, though, I fear all may not be well.

From announcement, through alpha and beta, and to launch, I can't remember ever being excited for Battlefield 5. Perhaps the release (and my subsequent apathy for) Call of Duty WW2 gave me all the second world war fix I needed, or maybe the enduring and odious controversy surrounding BF5's launch sucked all the wind out of its sails. Hypothetically, it could even be the sadly woeful content rollout scheme planned for the game. Though the reason why isn't clear, the bottom line is that I wouldn't have played this game at all if I didn't borrow it from a family member.

So, naturally, I dived headfirst into the game and found it lacking.

Such is the nature of my criticism for the game, I would like to speak of the more technical aspects first. And in fairness to it, Battlefield 5 touts the best sound design I've heard in a videogame for ages. Gunfire is distinctive and clear, explosions are utterly seismic in their tone and presence, voices are perfectly positioned in the mix, and an emotive soundtrack prevails over all.

If Battlefield 5 was a podcast, it would be the best sounding podcast ever.

There are also numerous smaller details present throughout, which add to the already strong mix and form a cohesive soundscape that utterly captivated me. In fact, my only complaint on the audio front actually lies with Sony, for not providing Dolby Atmos support on PS4. Were BF5 to get a magical Atmos patch, I think I might end up playing it for the sound design alone, and considering how impressive the sound on previous entries in the series is, that is high praise indeed.

Sadly, the same cannot be said for the graphics.

Battlefield 5s graphics on PS4 Pro range from adequate to original Doom, with the latter occurring with startling regularity. While weapon and character detail is to a good standard throughout - though not as high a standard as BF1, I feel - the environment often looks cheap by comparison. Noticeable issues, such as really gnarly texture pop-in on terrain, mediocre texture detail, and dirt cheap pre-baked lighting on some objects, appear frequently, though the true achilles heel of the presentation comes through the LOD. Whether the PS4 Pro doesn't have enough VRAM to handle the scale of the battles, or whether the poor system simply cant maintain a good framerate without some vicious graphical sacrifices, the result is the same: Minecraft trees.
Though most maps don't suffer this problem to the same extent, I've found the Twisted Steel map will frequently have trees no more than a handful of metres away, devolve into pixelated 2D sprites, and remain that way until the player moves closer. I have also seen fortifications that remain completely invisible, until the player zooms in with a rifle scope.

This is simply not good enough.

What I find particularly disappointing about the proceedings, though, is just how good the only two years old Battlefield 1 looks by comparison. Battlefield 1 had no qualms about throwing around sparks, fire, dirt, weather, tracer rounds and lens flares, yet in my playtime with BF5, I've found the only element that sees any improvement is the fire effects: all other aforementioned effects seem to have been dialled back. Whether this is a design choice to go with the look and feel of the game, or a sacrifice made to make it run better on the ageing consoles is unclear, the overall result is that Battlefield 5 just looks worse than its predecessor.

But as the flood of pixel art roguelikes on Steam will surely tell you, graphical horsepower alone is not necessarily a selling point; so while I can firmly express my disappointment in Battlefield 5s graphics, the gameplay holds most sway here. Sadly, things only really get murkier.

Unlike Battlefield 1s single player campaign - which held my attention with its strange weapons, settings and game mechanics - BF5 mostly fails to offer anything particularly interesting for its single player offering. I must give the developers credit for choosing to include a war story from the perspective of a German tank commander, but save for that, the other war stories don't offer much that I haven't seen or played before. Though, with all that said, the series has always struggled with singleplayer, so there's no great loss there. Instead, it's the multiplayer that sees the greatest shakeup, and regrettably, one of the series oldest issues rears its head again.

Battlefield, as a series, has always had the misfortune of being compared directly to Call of Duty, and in order to differentiate their game from CODWW2, I feel as though DICE may have thrown the baby out with the bath water. For the uninitiated, Battlefield has always allowed players to choose between four different classes: assault, medic, support, or scout, with an engineer class in certain titles. In all previous incarnations I've played, the classes all function the same, with the difference between the classes boiling down to the weapons available, and the special equipment they have, but in Battlefield 5, the difference between the classes has become far more pronounced. To the detriment of fun factor.
After being restricted to SMGs in BF1, the assault class has now gone back to its traditional loadout of assault rifles, as well as the semi-auto rifles that the medics had in BF1, which makes assault a more versatile class than ever, at the expense of all other classes. Medic in particular suffers, with only the relatively weedy SMGs to defend themselves with, giving them no favourable matchup at range, and only an advantage against scouts at close quarters. Compounding medic players woes, is the new revive system, which forces medics to find a finnicky target on a downed teammate, and then locks the player into an animation for a second or so. Easy prey for any passing assault class players, and a far cry from the spry, hit-and-run medics of previous titles.Support also sees its versatility suffer greatly, as the large, belt-fed weapons the class is known for, now come with the caveat that they can only be fired from the hip, or used with the bipod. Theoretically, one could switch out the MMG for an LMG and not suffer this penalty, but the LMGs are functionally identical to the assault rifles used by the assault class, and therefore seem mostly pointless. Even more so, now that the Ribeyroles assault rifle has been added to the game. This unfortunately means that when using an actually fun weapon, close quarters encounters are all but suicidal, and long or moderate range encounters are impossible without convenient, chest high cover, or going prone. Both of which make you a nice, attractive target for scouts, who have had their role changed the least. As per usual, scout class is theoretically useful for infiltration, spotting enemies, and taking out other snipers, but also as per usual, the real reason anybody plays scout is for the sweet, sweet headshots.

This wouldn't be so bad, if not for the fact that scout is the only class that can spot now.

Where spotting used to be a useful tool to mark out a nasty sniper, or an approaching tank, or just a way of highlighting a foe in fog, spotting is now something snipers do to get a pittance of score while waiting for something to happen. If they can remember to use the spotting gadget at all.

Even some quality-of-life tweaks from previous games are gone. Battlefield 3 and 4 offered extensive weapon customisation, which has now been tossed out, in favour of desperately dull cosmetic modifications. Meanwhile, Battlefield 1 offered the option to have up to three different loadouts for each class, allowing a player to quickly choose between multiple favourite setups - a feature sorely missed in Battlefield 5. As is the team balancing feature, which, while it didnt always work in BF1, makes totally one-sided matches in Battlefield 5 far more common.

But even all of that might be excusable, were it not for the elephant in the room, which by this point, may as well be performing riverdance to Rammstein.

While I wont go as far as to call the game unfinished, as some have, I cannot warn against purchasing the game now strongly enough: given its current state and price, buying Battlefield 5 is an utterly terrible decision. While the idea of a game receiving free additional content down the road to keep you coming back is a great idea on paper, in practice, it means that the longer you wait, the more game you get, for less price. This might not be so much of an issue, however, if the current state of the game wasnt so conspicuously sparse. At the moment, the entire selection of weapons could be filled out with just British guns from the second world war, the nine maps all feel pretty tired after a while, there are entire game modes missing, the lack of any factions other than the Germans and the British is disappointing, and no matter how hard I try, I cant make my soldier look like Samuel L Jackson.

Rumours of deep character customisation have been greatly exaggerated.

Moreover, while it is historically accurate to have a bunch of weapons from the first world war kicking around, the fact that a large amount of the guns in the game are recycled from Battlefield 1 is disappointing. DICE clearly went to great lengths to find interesting weapons for BF1, so the collection of the obligatory WW2 weapons, mixed with holdovers from the previous game just comes off as an attempt to pad the roster. If it hasnt been made clear by now, wait a year and pick the game up second-hand: your far less money will be far better spent.

All of which isnt to say the game isnt without merits, however. The core Battlefield experience is still present and accounted for, and fun can still be had in spite of the numerous modifications. The role of squad leader, for example, actually sees significant improvement, with the squad leader being able to call in support, in the form of supply drops, tanks and even a V-1 bomb. Air support from your teammates is also improved, with bombers frequently wreaking havoc across the maps, and fighters swirling after them to try to prevent them harassing ground units.

Sadly, though, (and ironically) the increased focus on squad play, specialisation, and being a more tactical title has ultimately made the game less fun. The only in battlefield moments used to promote the franchise are sadly just less frequent, the promised Battle Royale mode is missing in action, and the promise of more down the line just makes what we have now seem pitiful.

It pains me to say all of that. While I fully admit its fun to rip on a game from time to time, seeing a favourite series go through such a misfire is a sad affair. I ultimately cant say that I hate Battlefield 5, but all the little missteps mount up, resulting in what is clearly the series entry that I like the least, and the only one that comes with a warning to wait as long as possible before playing it. I can at least say that my graphical criticisms are fixed on PC, but my preference for controllers means I have to miss that boat, leaving a console entry that stands to look an awful lot better than it does.

In closing, Battlefield 5 isnt truly a bad game, just one that could be so, so much better.