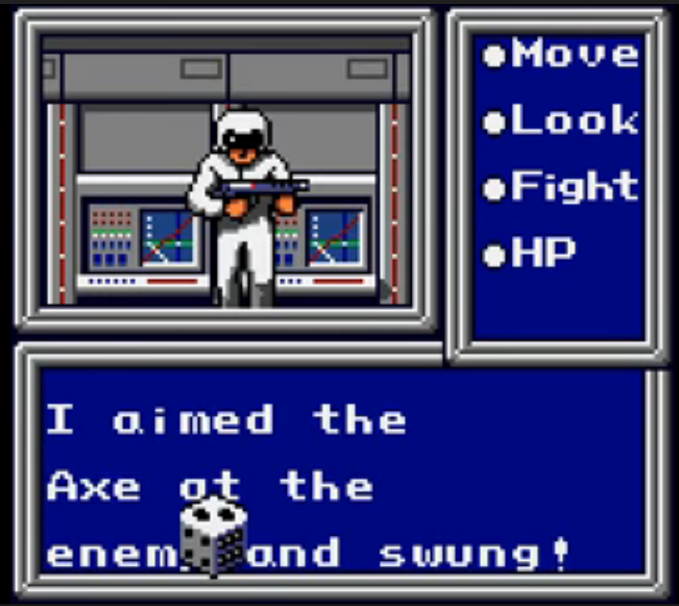 Attacks, while don't occur often, are not done in the traditional sense. In a very much wtf am I doing kind of sense the game mechanics include *dice,* yeah, DICE. Bet you didn't see that coming on an RPG. Any weapon or item you buy to aid you will increase chances on getting a good roll for success on said fights.

You play an agent from Paseo and no, its not ROLF either, although events here take place before PSII which means he and said character may well had worked on the same places and doing the same types of jobs. When you take a well earned vacation from all the hubris from desk jobs a friend named Ken Miller (chuckle) sends you a letter to come visit him at Dezolis. Why is this guy living on an icy planet with no sense of conformity is anyone's guess, but you decide to go cause that's what friends do.

When you visit his place Ken tells you he created a wonderful machine that amplify physical prowess on the body. If I am to understand that correctly this means he wants to create a Captain America on an unrelated game universe. Before he decides to try something like using you as a test subject (otherwise why would he even bother to ask you to go all the way to another planet just to see it,) he is kidnapped by some corporation who wants to use said machine for their own gain. This is when you finally get to start your excellent adventure.

On your way to rescue your hapless mad scientist of a friend you meet other characters who look suspiciously similar to those you find in other PS games. Probably using the same template to redraw them, I don't know. You can also go on about investigating and solving puzzles and getting items/weapons as you search for Ken and have a few fights till you reach the end where you fight a monster resembling the creature from the black lagoon.

After all that you are rewarded with an equally bland ending and that is pretty much it. The whole thing takes place in under an hour if you already know what to do and not even that much even if you play it for the first time. This game is mostly something to pass the time if you ever have nothing to do on your trip to school while carrying our oversized portable GameGear handheld. All events in said game play no connection whatsoever to the rest of the main series or any other side games that ever got released either. You could miss out on it and not miss that much in comparison, but at least you can explore more about two of the three planets that circulate that peculiar star in the game's universe. What I really wish it could had been included is that some of said stuff you could explore would include Palma, since this game takes place before PSII like I stated. Truly a missing opportunity there SEGA, but I can understand there might not been much to add on such a short game to begin with anyway.

The game also changes characters when yours gets captured in order to be rescued, which adds a bit of more variety to an otherwise monotonous quest. Good thing that hermit had a liking to you huh?

While the game offers you a better glimpse of how life in said fictional places is lived it does not come without its negatives as well. Some NPCs here blatantly spew discriminating statements about Dezolians (Dezolis' native population) and assert that the law abiding officers are crooked. There is also an event where you *have* to knock down your friend's sister in order to take off her pendant which is crucial to the story. The pendant, not the knocking out of said woman.

All in all PSAdventure is more like a novelty than nothing much for all that I had read about it. If you are pretty interested on exploring further into the game series' lore before the Online games were introduced then this is a good way on doing so.

One last bit of wthellary: If the events on this game took plave before PSII and seem to be adjacent with the fact that Rolf from said game was around and being an agent already, how the hell was Dezolis still populated by Palmans and not desolated still? Furthermore how is it that you could freely transport yourself via spaceship from both planets of Mother Brain restricted such things ever since that fateful spaceship crash where Rolf himself was part of before the time this game took place? Sure, the first could be said that maybe that mining incident may not had taken effect just yet, but the latter simply conflicts with the entire thing thereafter. If SEGA planned this to be canonical to the entire series at the time they have some serious gaps to explain about it.

Anyway, forgot to also add this longplay I found on youtube for any who is curious as to how this game goes about without having to experience it yourself, enjoy for what's worth.