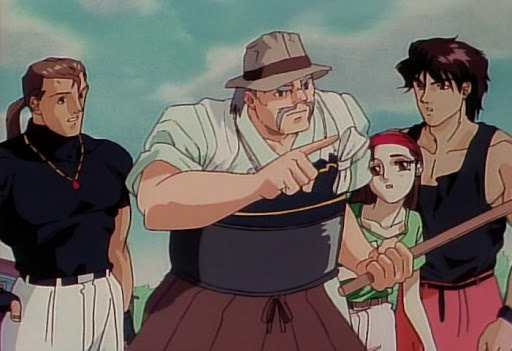 Videogame based Anime doesn't seem to translate well, even when animation has a lot more freedom to portray such adaptations than live action movies ever would. Art of Fighting is one of several attempts into Japanese animation that fit this mold and quite frankly I could never understand how it feels like the ones responsible for it just felt like pasting together whatever they wanted and turn it into a pathetic translation from the source material than say, try and turn it into a mini-series that could compliment said videogame series instead. I feel quite the same about Samurai Shodown which in my opinion was treated even worse than this.

The story here involves Ryo Sakasaki, sporting a jacket and dark hair in contrast to his videogame persona, trying to reap a reward on a missing cat in order to pay for hid dojo's utility bills. Robert Garcia stops by to mock him while at the same time making statements about marrying Ryo's younger sister, Yuri, despite her being underage. After a couple minutes of nonchalant comedic exchanges and an improbable showcase of martial arts display, they stumble upon an apartment where thugs kill off a hapless victim by accident while defending himself. Their leader Jack then begins fighting off Ryo and Robert under the pretense that they might know the location of a diamond they were chasing over. After Jack is soundly defeated he reports to his boss Mr. Big and along with other baddies like King and John get the drop on who Ryo and Robert are and decide to kidnap Yuri in order to drag them out and have them surrender said diamond in exchange for her release. After a few fighting scenes Ryo and Robert defeat the crime lord and his minions and the day is saved, but not before getting one final scene where Ryo is still chasing after the same feline to save his dojo.

And that's it. Nothing more than a very short ventures into the entire thing. Even as short as the OAV is (roughly 50 minutes give or take) it feels very long when most of it shows next to nothing in terms of development of any kind. Its just there. You watch it and then just forget about it. The animation is pretty cheap and the dub is even cheaper, having dialogue horribly translated from the Japanese original. Of course engrish would appear here and there as evident on computer screens checking the protagonist's profiles.

While some of the characters pretty much mirror their game counterparts in terms of design, some like Todoh appear here completely different being that he is depicted as a bumbling chief of police hot on Mr. Big's trail for instance. At least he would get a part on this adaptation being that Mr. Karate AKA Takuma, Ryo's father and final boss on the first game of the series is not even mentioned at all. Perhaps his inclusion here would just confuse things further and would have the people working on this thing actually work to make a decent Anime adaptation. Heaven forbid.

As bad as it is the Anime itself is not too bad. Fight scenes are a bit amusing, characters try to be as charismatic as they can be, and it is a bizarre twist as an adaptation overall. I personally would not recommend owning it unless you would buy it to add into a collection of sorts. Otherwise watching it once and just moving on is highly advisable. Although if you never bother to even watch it you will not miss anything in the least. You will get more story out the games themselves in fact.