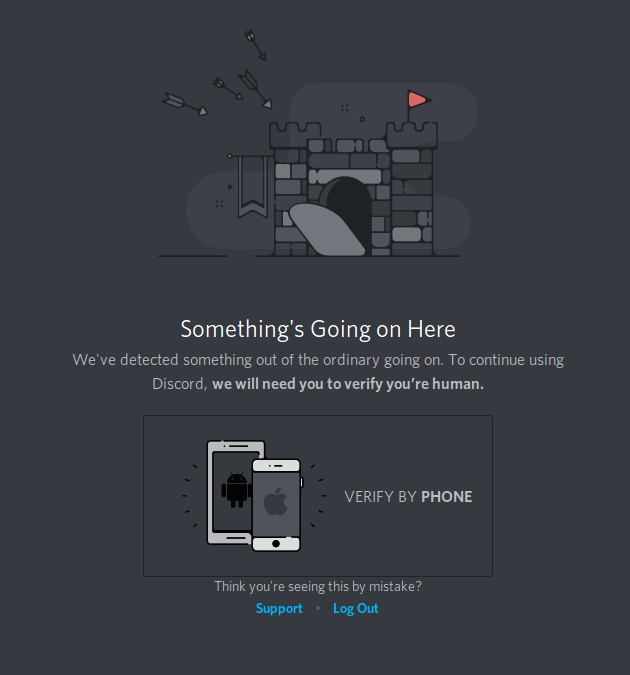 I have posted last blog about my disdain towards Discord and Reddit, being that they mostly are used for kids that love memes while at the same time causing harm and problems for anyone else who tries to use such things for legitimate reasons. Simply put, both are just glorified message boards and chatrooms, each which share the same level of negative, toxic instances and with such toxic individuals using it will never amount to anything else other than being a breeding ground for bullies to hurt others.

Case in point, after having to create a new account just so I may had use that Discord thing again to promote my youtube channel among other things rather than acting like a kid with a meme fetish, it would act up demanding to have my phone number to unlock my account with no other explanation, as shown on that screenshot on this blog. I had tried several times to unlock my account with said phone number, each time having it to go back to that same damn screen still asking for a phone number until it would give me this nonsense of "being limited."

I gave up on that account. I had suspected that there was more going on than just being a glitch so I created a new account to continue my activities using that thing as usual without bothering to join certain servers which I had problems before, just like that "justin whang fans" one. I would use this account to continue promoting my work while I would write to DISCORD support about what was going on my last account. The only thing I kept receiving from those people was that they just couldn't stop asking anyone to use their phone number if the site demanded it but nothing else. I kept stating that their site would refuse to let me in regardless, and that my account may had been hacked so I asked them to look that for me. Again, the same nonsense about using your phone number but nothing about looking into my problem otherwise. After seeing that I would not get any help from them I decided to cut my losses and use my new account every now and then since I hoped I was not going to have to deal with anyone else.

Well the next thing I know the same crap happens to my new account and again it refuses to let me log on even when providing a phone number. Now I know this is more than a coincidence and that pretty much someone has messed with my new account as they had before. I am pretty sure these toxic individuals from that particular server are behind it, as well as that other buddy of theirs who has been a thorn on my side for years who decided to join up in hacking accounts as of late.

And you know what? I don't care. Discord is named as such for a reason. This place is just a chatroom and I know how those things yet when you make the mistake on using them. The fact that this thing is so feeble to the point of trolls hacking into other member's accounts and support not caring about such unruly activities just makes me realize I have no damn reason to waste my time on ever using it again nor coming back with a new account evermore.

They can keep their cesspool of toxicity. I really am not desperate on using it nor going through all the trouble of having to make a new account in hopes these bullies would get tired and actually go on getting a life. Ever since I started using that thing it has giving me nothing but headaches anyway, and has also made me realize just how awful people can be, especially when going to servers based on websites that you were once a fan of and would visit regularly. Discord manages to skew your views on such places when you try to interact with the people that use it. Forget it.

My current life's difficulties go over any of these petty annoyances online. I am trying to keep my home while hoping and getting a job to pay for the rent at least, all while I am fighting my work injury disabilities which at times make me want to scream in agony when the pain is too much. This along many other difficulties I am dealing with currently which makes me not bother with such assholes who think its funny to ruin someone's life online. I hope they are happy. I hope they one day don't have to face with the same difficulties I am facing, because if they go harassing me about petty crap online getting this upset about it, it makes me wonder what they would ever do if they face the same hardships me and others who don't have the luxury of doing such things. Most likely they would just jump off the cliff.

So keep your discords, your reddits. I was able to get along without ever finding about such things before just fine and have no reason to care about never being able to use them again.

You didn't win anything by accomplishing this either. The only thing you had earned is less respect from me and anyone else, with the fact that there is no reason why anyone would give a damn about you crying over arguments over the internet when you pull all this crap on people who try to live their lives.