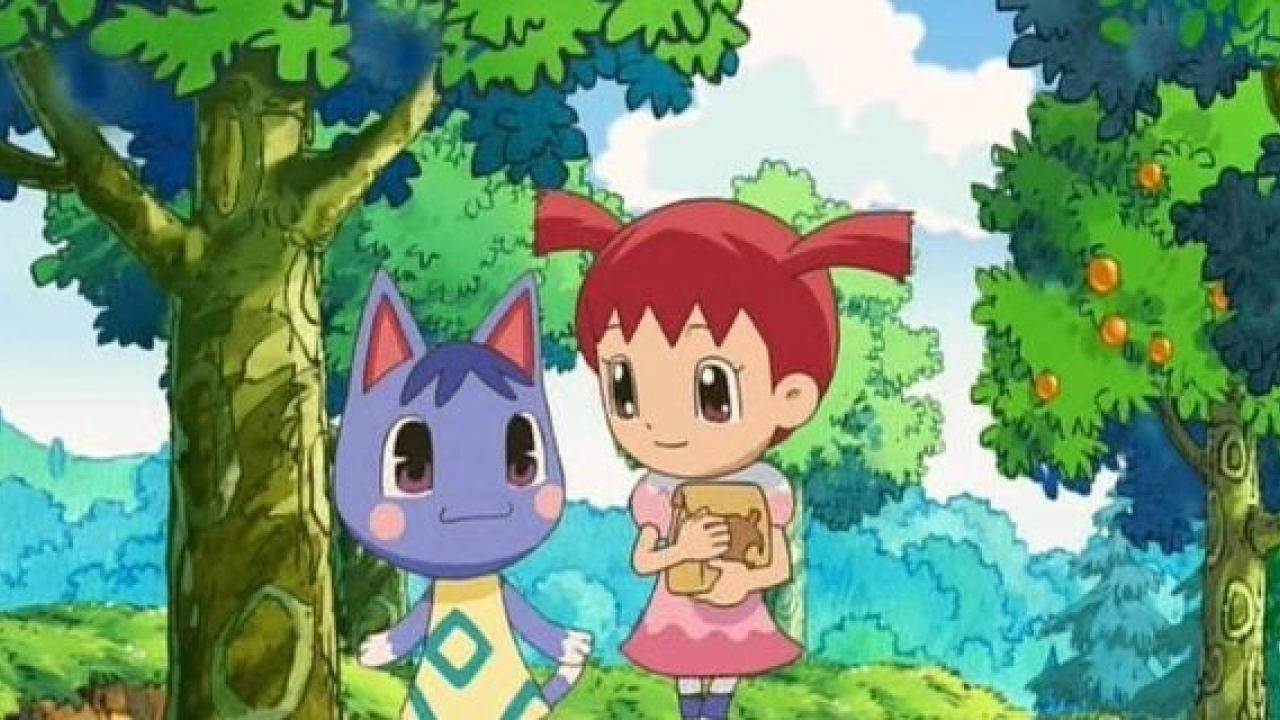 Animal Crossing is a sincere Anime adaptation of the popular Nintendo game series, not going too far into wanting to be an exact copy of said game neither trying to be set apart too much from it either. Whether you had played any of the games released or not, the Anime is pretty much for any who wishes to view it. Chances are you will have a good time till it finishes without having to read any references from it regarding the game counterpart.
The feature length OAV features Ai, a young human girl who arrives at the animal village one stormy day in an effort to be able to take responsibility for herself without any aid from her Mother. As soon as she meets Tom Nook, the would be landlord, she is immediately set to work for him delivering packages with the excuse that this would be a perfect way to meet her new neighbors al around the village.

Ai manages to be friends with a selected few, namely an elephant named Sally and a Cat named Bouquet. Along the way she meets with human boy named Yu, who avidly scours the place digging for rare items, capturing exotic insects, and playing pranks. While Ai gets used to the quiet yet erratic life with the animal residents, she finds bottled messages washing ashore from time to time, wondering what their meaning would be. The Anime continues on Ai's new daily life till the point where she understands what is to live on her own and understand others.

While Ai takes part on socializing with the animal residents, Yu goes on exploring and finding items he collects. This was in my opinion a smart way to divide the activities one would do in said game, without having to become too convoluted. Quite smart.

Animal Crossing not only focus on Ai's story within the movie as it also shows other characters who have their own story and goals they wish to fulfill on their own such as with Sally the Elephant who aspires to be a fashion designer and Bianca the artic wolf, who vividly gives Ai advice on being proper all the while woes her romantic fallout with Apollo the Bald Eagle. This gives the Anime quite a fascinating angle which keeps you watching till the end. For those who might be confused as with the naming of some characters, don't be as this does not affect the Anime in any way you could think of. Bianca, who in the game is referred as Whitney, is a lot more kinder and approachable than what you end up in the game for instance. A name change would mean a change in personality and I for one am fine with it.

I will state however that between all of the plot that surrounds the movie, it at times seems to drag a bit when the story does not follow anyone. However such scenes are as enjoyable as with the rest of the entire thing regardless.

The Anime film gets an unexpected final ark before concluding. Without spoiling it much, its just as whimsical as with the rest of the film without having you trying too hard on how it fits with the entire of its plot.
This Anime is a good telling of the game series, reflecting its social highlights and enforcing it with cute visuals. Should you ever have a chance to watch it I highly recommend it. It can warm your heart quite a bit.

One last tidbit is that the sole human characters names Ai and Yu respectively share the same names with another Anime based on a game series called Final Fantasy Unlimited, an Anime I also recommend, and are also the names of a girl and a boy respectively albeit switched around. Even if this does not make a connection between game franchises in any relevant way I cannot help but to notice on how this could be seen as a coincidence and nothing else. Quite curious.