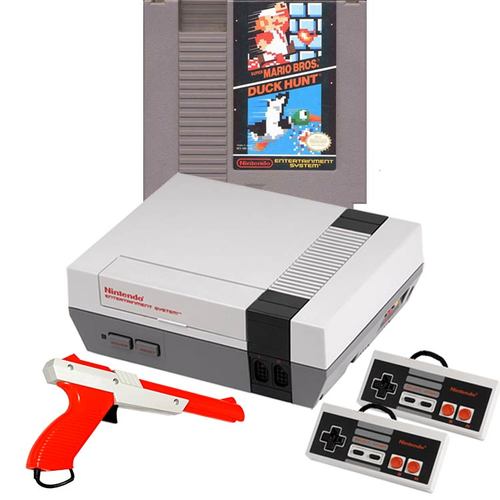 Once upon a time in the early 90s a new privately owned business arrived into my old neighborhood in Mexico. A man leased the diminutive one-bedroom office with a second floor that was placed exactly at a corner of a street. This was a very odd building to say the least, but that did not deter me from the fact that the new little shop was videogame related. The man himself would rent out NES cartridges and NES systems, along with allowing customers to play inside said store for a flat fee for every other time allotted. You could play any NES game he had for 10 minutes which was measured by a huge timer he had besides the CRT monitor and the NES, on which the game would just turn off automatically. If you wanted to keep playing you would pay him for another 10 minutes before the timer would stop.

The man himself seemed to be in his late 20s/early 30s, with a mustache that would have rivaled Mario. He was a kind man too, liked having kids hanging out at his place and would even allow me to play some games for a few minutes free whenever I visited. His leased office (if it could be called that) was plastered in NES related posters from top to bottom. The most vibrant recollection I have was of the Final Fantasy poster which detailed some monsters you would encounter in the game. I rented out an NES system and a game a couple times, the first time with Super C and later with Teenage Mutant Ninja Turtles. I had a blast playing at home during said times as I never owned an NES system during that time, and any other kid would boast on having theirs.

The owner would also allow me to take over while he would step outside. I would have to take charge of the renal Nintendo in-store whenever someone would show up. I was never hired either, just would ask me to keep a lookout if he had to go briefly. Some other times we both would step outside to visit any other local arcade place I was familiar with just so he could check out what games they would have inside. I can say that we became pretty much gaming buddies despite our age gap.

Some kids would show up and play NES games inside the store as I had stated, showing off their skills at games they were familiar with. One of them kept spending more money to have more time to play with a game, which the store owner would joke that he was spending enough to actually rent out an NES system to take home. There was a time when a person came by and asked if he could buy an NES game from him. I peeked curiously at what he had wrapped in a towel with high interest, as it was just the inside of a cartridge with a sticker labeled CASTLEVANIA II. The rental shop owner declined explaining he could not do much with a cartridge without its exterior. That would be the very first time on which I could see what game cartridges looked from the inside.

I never had a dull moment visiting this rental place to be honest, enjoyed it every day I would show up besides going out to the arcade in some days. One day however I visited the place as usual only to find out that it was closed, and seemingly, he was no longer around. I would knock on the metallic door which was coated black without any response given. I heard that he simply closed and moved out without ever giving out any other notice or explanation. It was a sad moment to know this being that we really did not had such places around here of its type.

If there is anything I ever regret about this life experience is that at some point I made a crude comic strip drawing of him and his store. Each panel would be him growing old as spider webs made themselves apparent. It made it seem as if he would spend days at this place without customers showing up, something which he laughed about it and said that maybe I should had include myself in said drawing being that I would stay all the way till close whenever I visited. I never meant to made fun of him like that, I was a dumb kid and was joking around but after seeing that he was gone it did made me feel saddened because in a way, I felt responsible for him leaving overall.

One thing I could think of as well is the fact that the Super Nintendo was already about and being that he did not had any games or systems of the type to rent out it may had dampened his business to a point. Maybe I am just speculating but this could have been a possibility. Another would be that he was just not making enough to stay and lease the place. After all, our hood was pretty darn poor and not many would have much money to enjoy in such luxuries.

I do cherish the time he was around bringing joy to kids in renting out NES games, systems, and allowing them to play inside for a small fee. I would always have hoped that something like this would grace our poor neighborhood anew, but unfortunately this never came to pass before I came back to the US. I do wish him the best on his own gaming business if he hasn't given up on such.