Don't get me wrong, the IDW titles seem a bit testy sometimes, but I will say they are a whole steps higher above what Archie was doing, which just made me shake my head in disdain as a new issue would come out. For one, the Archie iteration didn't seem to know just WHICH demographic was writing it for. The first issues had this cute slapstick family friendliness about them and while you would not take them too seriously they would still make a point across with a few weird concepts here and there, but not going overboard. That we will thank KEN PENDERS for. Even the plot episode cartoon version had the same premise and character designs before they went on changing most of it to what we know about it today. 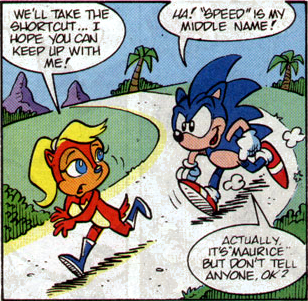 And I believe that was when Penders came into the fray. For one the comic changes from that family friendly silliness to an edgy darker tone which would not only compare to the animated series in Saturday mornings, it would try ever so hard to SURPASS it and that was one of the many problems the comic was starting to have that was leading to its downfall in a slippery slope and drowning the more it was worked on.

Suddenly we had dubious aspects thrown in such as Sonic suddenly having a thing for every other female character within the comic besides the established romance with Sally Acorn set in the cartoon, arguments with his long pal Tails that led to *graphic* confrontations and break-ups, sexual innuendo which nobody would ever say it was right for kids at all, wtf moments including storylines that made no sense and the inclusion of many "original characters" that were trying hard to wedge in along with any other thing they were trying to write about. This and the killing of characters that would appear any other time such as Sally dying because Penders thought she was not going to be relevant anymore, and turning characters into robots including Lupe the Wolf's and her CHILDREN, with a quick "apology" issue right after that event. My God.

And I spoke too soon of course

All of this plus the very ugly art and awful writing that was tossed into the mix to create an awful tasting soup of a comic. Plotpoints would ignite massive plotholes the size of craters which Penders and anyone else after him never bothered to fill, interests on making Sonic "edgy" as well with everything else was making said comic more of a meme than anything else.

By the time Archie rebooted Sonic's comic yet again, it was a bit too late. SEGA waltzed in asking them kindly to quit messing around and asked IDW to take reign. During this phase, Archie tried to redesign the entire character troupe into looking more Sonic-like than anything before, and I actually was OK with that. The story was still wonky but seemed it had a bit more of a promise than before. Sadly, it seemed Archie just would not stop having a HUGE head about anything and loved to be narcissistic trying to have any freedom over it and still adding nonsense, such as when they decided that Mobius was Earth all along for instance. 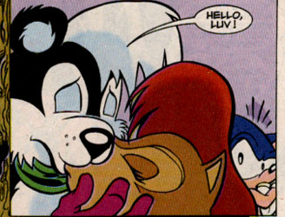 Right in front of Sonic no less. Sally you bad girl.

Another tidbit about said freedom of creativity problem was that Archie liked to pour in any other story or game that came out during their ownership of the comics character, making a huge convoluted mess trying to tie in characters and story with anything they were doing at the time. This was yet another reason why this comic never caught my attention that much when it was in circulation. 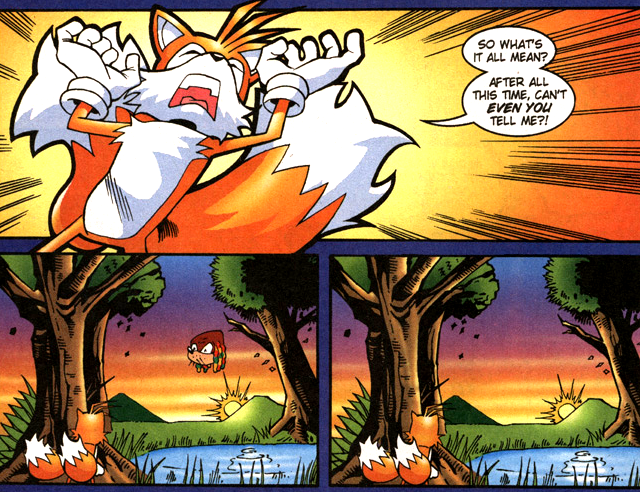 A good question which no one will ever find an answer for.

Even when they scrapped a lot of characters that were not officially tied to the SEGA games, and probably we might never see them again that being the case, the current Sonic comic is doing a better job in my opinion. You will have to remember that Sonic started out in a *videogame* and was not the product of a cartoon tv show. As harsh as this realization is to hardcore fans.