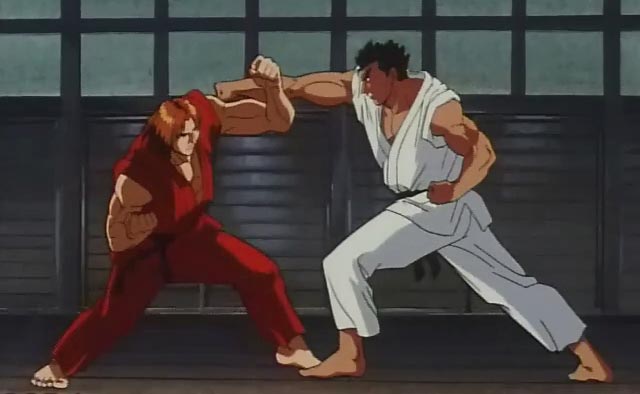 Street Fighter II V is a prequel of sorts, as it takes place before events featured in the popular Capcom sequel fighting game franchise, while at the same time taking some liberties on origins for any other character featured. The story showcases Ryu and Ken traveling around the world as they seek ways to improve their martial art techniques and also having fun, something that is sure out of character for Ryu canonically. Along the way they meet Chun Li who also takes part in some of his adventures, as well as other characters that would become their adversaries in the established games.

The series opens up with Ryu visiting Ken at his mansion in America, then goaded into a bar brawl with Guile and some of his military comrades after Ken insists in going out. The battle doesn't go well for Ryu as Guile leaves him a bloody mess. While Ryu recuperates, Ken tries to take revenge by fighting Guile, suffering the same feat. Both then decide its time to refine their skills to overcome tough characters like Guile and such. Ryu and Ken not only go on seeking their fighting prowess, but also help the law in cracking down dangerous criminal organizations which are associated with Shadaloo, paving way to their meeting with M. Bison later in the series. During this time Ryu finds the secrets of the Hadou technique which would allow him to learn the fabled Hadouken and other tidbits that are the mainstay in the gaming series.

Themes from the game itself are narrated throughout episodes, such as the assasination attempt of Chun Li's father, M. Bison's powerful criminal syndicate, and fights among Street Fighter characters in any other scene. While the series is keeping it as close to the game series as possible, I simply cannot agree with some of its themes which like stated, it takes liberties which such as the origins of the Hadouken by having Dhalsim teaching Ryu the secret ways to achieve it. Then we got bizarre inserts like Cammy being a devout Catholic while performing assassination missions for M. Bison, and Akuma appearing in the background/foreground doing nothing but being motionless even when Ryu and Ken pass by him. Why is Akuma even here to begin with anyway? Why is Bison wearing blue?

However the series achieves greatness where it counts, and its fighting scenes are some of the best I've seen anywhere else. This includes that awful American cartoon series which tried hard in being an average kids show than anything else. You could see this as an alternate version to the entire Street Fighter mythos more than a prequel to canon, or go along with it and ignoring some bits that would never make sense trying to figure out.

Also, the V stands for Victory, not part V in case you would get confused about it.