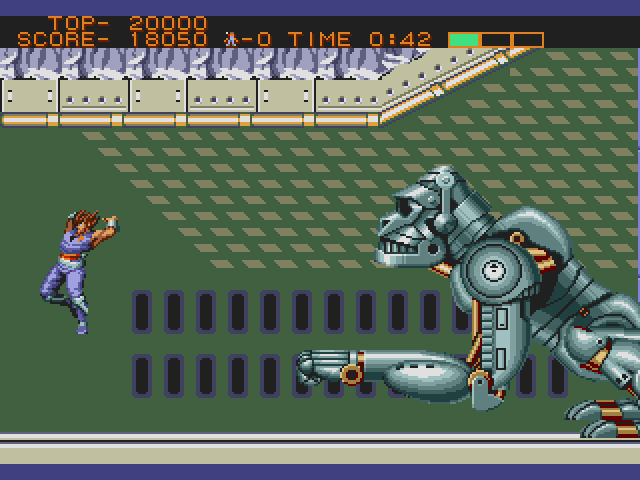 As much as I love Arcade games, I cannot help but to feel like their console versions never truly gave me that feeling that would not only be comparable from its original version, but also surpass it in some way. Well here are some of my picks on which I feel such had been established and was happy to experience in my lifetime, while also acknowledging that they pretty much are better than the Arcade originals as well.

STRIDER- SEGA GENESIS:
Strider, the futuristic ninja who slashes anything on his way made his appearance way back in the 80s on his own Arcade game. Most of you reading this would know him as Strider Hiryu thanks to Marvel VS Capcom and beyond. Strider is one of the few Capcom characters who has been revitalized and revamped to continue their gaming quest to kick ass, but it was on the SEGA Genesis where he would be remembered mostly for the fact that this game is just fantastic.

The Genesis port wasn't just an adaptation from the Arcade, it actually improved upon it by adding more BGM tracks that the Arcade original lacked. The fact that it mostly replicated the Arcade original was more than enough for fans to enjoy the game through and through. This version also added its own ending making the game feel more complete, even if it lacked voice over dialogue between stages. But that would have been nitpicking otherwise.

KARNOV- NES:
The Arcade game is quirky, and has a greedy Karnov going through the trouble of wanting to become rich while battling monsters. The NES port improves over the Arcade original by a tenfold, including a revamped story involving the Russian fire breathing strongman and also a more forgiving gameplay, including a two hit system over a one hit, one kill of the Arcade. In the Japanese port Karnov even gets several different endings depending on how you beat the game. All in all, the NES version is the most fun to play period.

Teenage Mutant Ninja Turtles IV- SNES:
The SNES port of Konami's famous 4-player Turtles in Time includes changes in gameplay such as finishers to dispose of impeding Foot Soldiers and new stages added for maximum enjoyment. Although only two players can enjoy the adventure in contrast, it is pretty faithful to its Arcade counterpart and the extras on it surpasses it. The SNES port also features bosses like The Rat King, Slash, and Bebop & Rocksteady who were as much fun to beat along with the rest.

TEKKEN 3- PlayStation:
Not only it feels like a perfect copy of Namco's Arcade hit, it also features other nifty play modes such as the fabled Tekken Force, a Final Fight like beat'em up where you can dispose of a bunch of goons with bird names and face a character from the fighting roster as the boss at the end of each stage. It also features hidden characters like Gon who were not featured in the Arcade and other cute game modes like beach ball challenges. The fact that every character features their own ending was already a staple on the home conversions in the PSX, but on Tekken 3 you would also be able to replay endings from its first two prequels by having save files from said games on the same card. Pretty neat.

SOUL CALIBUR- SEGA Dreamcast:
Soul Calibur on the SEGA Dreamcast blows the Arcade game out of the water in several ways. Not only the gameplay is smooth and precise, it is revamped quite nicely on the Dreamcast port, making it quite a feast for the eyes. The port also featured Cervantes, who was the last boss before facing Soul Edge on its prequel, and also several modes such as an art gallery featuring fanart from gamers around the globe and full profiles and backstory on each character within the game. SC for Dreamcast is simply a marvel which every avid fan of the series should own.

JoJo's Bizarre Adventure- PlayStation:
While the SEGA Dreamcast features Arcade perfect visuals and gameplay, the PSX port exceeds it in terms of gameplay and play modes. The port would feature "Super Story Mode" where you could experience the game featuring fighting matches, mini-games, and RPG elements to level up your character. You would not appreciate the awful loading times, but it is quite enjoyable with this original mode.

Street Fighter Alpha 3- SEGA Dreamcast-
Not only its Arcade perfection, this port also features other modes to keep your fighting skills fresh such as the World Tour mode where you can level up your character with skills earned along your journey and adding said character into the huge roster of fighters, some which are included from previous SF games like Dee Jay and Fei Long. The gang's all here in this home port, including the souped up M. Bison you face at the end via cheat code and get to use his devastating ultra psycho crusher.

And this is my list. I am sure there are other games out there that surpass their Arcade versions but these here are the ones that had left me with the most impressionable experiences of the lot.