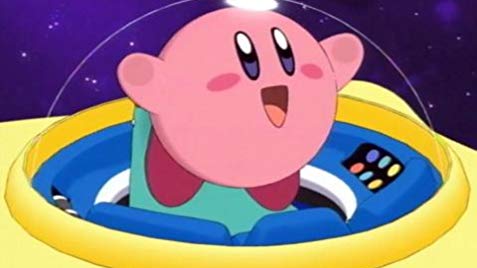 I am not a big fan of Kirby. Its not to ssay that I dislike the cute, voracious pink ball of doom but it suffice to say I regard said character as I regard MegaMan, while I play some of tis games, I don't necesarily regard him as big as fans have done over the years. To me, Kirby has an orthodox way of gaming which leaves me utterly confused on how to play most games and simply go on to other platforms I am better at, nothing else.

Kirby debuted in American TV sets in 2002, when the likes of 4Kids was syndicated airing such shows as Pokemon to compete against. It was quite interesting to see an Anime made about said character being that its games have been around since the 90s, and seemingly there was not much thought on ever making anything about it until that time. However the Anime just never connected with me. A cookie cutter of sorts in having Kirby being an alien from another world crashing in an unknown planet filled with weird-looking characters who are being oppressed by King De De De, who in order to deal with Kirby has his monsters custom made by ordering from a dark company called "Nightmare Enterprises" to add the monster of the day ala Mighty Morphing Power Rangers. And just like Power Rangers, Kirby gets a special power to fend off against said monsters, even though it is never explained how the natives of the planet even know what his powers are given he is an alien visitor.

For one thing the dubbing of this show is a bit obnoxious, especially De De De and his minion's. Kirby was given an odd cutesy voice despite the fact he doesn't even speak at all throughout the series, often making noises to agree or disagree with anyone. While I have personally never seen it speak anywhere other than Smash Brothers, I can say that this is just ridiculous as well. Seemingly, the show was edited to match its cute look so kids would find it more approachable, but that is my assumption. Also, how come Meta Knight is very fluent in speech compared to Kirby if he's also a member of the same species?

Despite being produced out of a successful game series, I simply never have that much interest on watching it for long. For me it seemed that it tried very hard to be taken itself seriously or at least, seriously enough to compare to the likes of the Super Mario Bros. Super Show that aired several years prior. Its american themesong certainly does not help on wanting to be taken seriously just as well.

While King De De De is being posed as a sadistic figure, one that could care less about how others suffer and often taking enjoyment, no one really does anything about him other than Kirby kicking his oversized self out of the picture at any given episode. In fact most of the time he even interacts with said oppressed people in idle chat once in a while. Makes me realize he is not really an oppressive dictator more than unruly elected Mayor of a small town, on which most of the action takes place in comparison to the entire world is based upon.

But is Kirby Right Back At Ya! truly awful? Not really, but it lacks that special something to make me feel nostalgic about an animated series based on a beloved gaming franchise.