Ready the blade once again and prepare to embark on yet another horizontal journey. Through temple ruins will you scour, across murky gas-ridden swamps shall you travel, searching for the mysterious purple-haired maiden needing rescue. Hideous demons thwart your advance, from flying green cyclopses to Lovecraftian fish-people, each one lusting for a taste of your fine Greek blood. Sad that they won't have a drop, because you've got an axe in tote. Not your ordinary wood-chopper, but a transforming curved blade. Busting idols reveals power ups for changing the axe to a mace, and eventually into a mighty sword. For moments when the crowd is too ornery, you can unleash a devastating spell for reducing all enemies in sight to blackened embers. 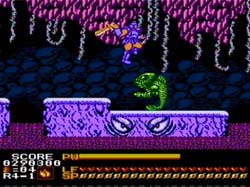 You are the titular protagonist Astyanax, high school student turned interdimensional hero on a quest to bury the hatchet with in one Blackhorn. The evil mastermind has sent his mythological minions across several straightforward levels to stymie your efforts. Worry not, because this side-scroller isn't defined by its level design. Combat is where it's at! Enemies approach, some flying, some bouncing, others...dancing? Your only recourse against them is to cut loose a mighty chop and send them back a few feet. Time your chops just right and you can kill them without taking an inkling of damage. However, constant chop-chop-chopping isn't an effective strategy. You may have noticed a bar in HUD denoting your 'power'. This tells you how much damage your attack cause, and depletes when you take a swing. It replenishes slower than it depletes, forcing you to wait for a fully powered up attack. Depending on the situation, you might trade damage for more hits or hit less often for more damage each time.

Unlike many other basic side-scrollers, particularly ones more lazily thrown together, this one sports tight physics. The controls are not too stiff, not too loose, and that makes a huge difference because timing is the key to victory. Be thankful, too, that collision detection in regards to you hitting enemies is spot on.

Once you've sharpened your skills and become an expert timer, you can move on to the big nasties at the end of each stage. I'm not referring to the two-headed anthropomorphic reptilian or the electric minotaur--adequate mid-bosses with predictable motions. Astyanax carries the Castlevania banner proudly in regards to creative bosses. You'll hack at a vicious trent with impaling tendrils, and a goblin warrior riding on the back of the lovechild of a troll and an ostrich. Battling Medusa yet again might not be totally original, but taking on a brain-like monstrosity contained within a mammoth armored suit, like a medieval Krang, is certainly one for the books. Just wait until you've destroyed the suit and see the creature underneath the metal. Each boss is a horrifying perversion of established creations, twisted and absolutely fitting for the dark atmosphere set by the environments.

Kicking ass is not without complications. Astyanax himself suffers from a case of sprite elephantitis. While a massive sprite may summon feelings of superiority, it also isn't the best for dodging projectile. Or dodging at all, really. Quite a number of nemeses fire shots at odd angles, and slinking around them is nearly impossible. Frustration will mount, and you will cry foul because this is downright unfair. Projectiles are not an overly common phenomenon, but not battle should boil down to pure constitution as it does in many cases. 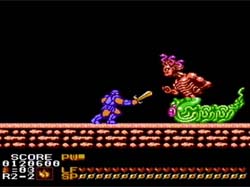 You'll notice other small flaws, like how enemies will knock you back even though there was ample space between the two of you. More Castlevania flashbacks will ensue in the marshes where flying fish take the place of medusa heads and knock you into the murky waters. Each time you die, your weapon loses an upgrade, and many scenes presume rely on your possession of a sword. Creatures become more powerful as the game progresses and take more shots to kill, or an average amount if you have the sword. Hacking away at late-game enemies with an axe becomes nightmarish and quite like a cruel joke. You imagine some folks at Jaleco's headquarters in the early 90s laughing at you from across time. Rage quitting would be reasonable if not for infinite continues, but even with them Astyanax is tough as nails.

Astyanax is far from perfect, though it expects perfection from you. It's rough, rugged, difficult, action-packed, and filled with nastiness and malevolence. Somehow, I like that. I like that it's flawed and rough, like a tough yet attractive biker chick. It may not stand above such brethren as Ninja Gaiden or Castlevania, but it sure beats out other rough awesome-wanna-bes like Castle of Dragon and Frankenstein: The Monster Returns. Astyanax doesn't suck up or beg for your love and respect; it commands it with a stiff punch that will break your jaw in six different places.

If you enjoyed this Astyanax review, you're encouraged to discuss it with the author and with other members of the site's community. If you don't already have an HonestGamers account, you can sign up for one in a snap. Thank you for reading!

© 1998-2020 HonestGamers
None of the material contained within this site may be reproduced in any conceivable fashion without permission from the author(s) of said material. This site is not sponsored or endorsed by Nintendo, Sega, Sony, Microsoft, or any other such party. Astyanax is a registered trademark of its copyright holder. This site makes no claim to Astyanax, its characters, screenshots, artwork, music, or any intellectual property contained within. Opinions expressed on this site do not necessarily represent the opinion of site staff or sponsors. Staff and freelance reviews are typically written based on time spent with a retail review copy or review key for the game that is provided by its publisher.