Defense Grid: The Awakening is a tower defense game that was first released way back in 2009. If you decide to download the title today, you can probably find it on sale, like I did. In that case--or even if you have to full price, if Im to be completely honest--you should definitely make a purchase. Hidden Path Entertainment has put together a truly satisfying package.

Theres a story, of course: aliens are invading a futuristic complex and you have to save it. You do so by activating defensive measures (mostly gun turrets) while a chatty AI pal who occasionally sounds a lot like Zartan from the old G.I. Joe cartoon gives you alerts and talks about raspberries. He once was a human, you understand. That was years ago, though, and now he just wants to help you as you defend the grid. The story isnt especially deep. Its told in bits and pieces, through mournful snippets of dialogue that youll hear repeatedly if you happen to suck at completing a given stage. By the end of the game, youll know the full tragic tale of your mechanical chum.

Plot isnt really the reason that Defense Grid is such a wonderful experience, though. The real draw is the strategy side of things. Placing towers to stop a seemingly endless stream of enemies doesnt seem like it should serve as the basis for a successful subgenre, but for some reason it almost always does. A few times, Ive sat down to play for a minutes before going to bed and then looked up hours later only to find that night had come and gone. Thats a rare enough occurrence for me nowadays that I really notice it when it happens. 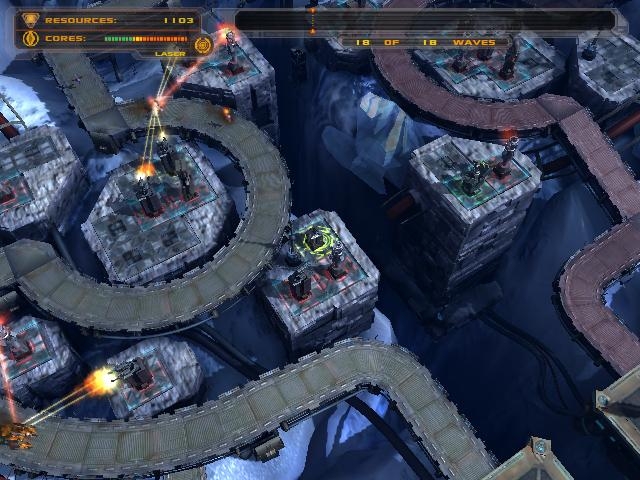 At a glance, Defense Grid doesnt differ a lot from the typical tower defense title. You start off with a paltry few units and your arsenal expands over time. The first few that youll gain are often the most useful, however. They include standard guns, flame cannons and lasers. Each piece of arsenal that you add to the mix (known here as towers) will cost you resources. You start a stage with a set amount of resources and you gain more of them as you gun down aliens that are trying to reach your cores. The goal is to prevent them from doing so, but thats not always possible. Sometimes, you have to just shoot them down before they can escape with any cores that they may have grabbed. If too many cores are snagged by enemies in a given level, you lose. The better you do at preventing those precious cores from being taken, the higher your score will be when you complete a stage.

The score component definitely adds something to Defense Grid. Each stage features default scores that you can try to beat, and you can also compete with friends to prove your superiority. Placing somewhere on the general scoreboard isnt difficult (youre essentially guaranteed placement as long as you clear a map), but snagging a top spot is another matter entirely. Youll need to play a nearly perfect game if you want to claim true victory. Even winning a map without losing any cores might not be enough; you also need to make sure that youre not wasteful with your resources.

Unfortunately, even with the leaderboards on hand to keep you motivated, Defense Grid can become dull after prolonged exposure. Its best played a few hours at a time, or even for a few minutes here and there. If you try to clear too many maps at once, the repetitive nature of things can start to wear on you. Almost without exception, the strategy to clear a map is to start by placing inexpensive units so that they block choke points and force aliens to take the longest route to the core. Then you upgrade some of those units and supplement them with more expensive varieties. There are occasional complications in the form of multiple entry and exit points for enemies in the later stages, but even then your best bet is to force everyone to snake through some well-placed machine guns (your most basic defense) that you have upgraded to their maximum level. 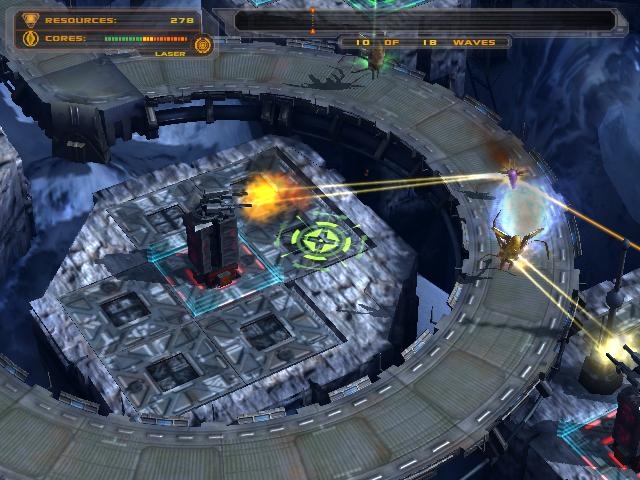 If the general campaign gets old, though, there also are alternatives. Missions include special objectives that switch things up. Your options change depending on the scenario. In one case, you might be able to try a familiar stage with 99 waves instead of the usual 25 or 30. Elsewhere, you might be able to start with 20,000 resources but defeated enemies wont drop any additional resources. Since there are more than 20 missions, each with a handful of compelling variations, Defense Grid can keep you entertained for a long while if youll just let it.

While Defense Grid wont ever be mistaken for a graphical powerhouse (this isnt the genre for that), its presentation is pleasingly effective. You can zoom in and see good detail on the towers and the invading enemy forces, or you can pull your perspective back to view things from a distance (typically the best option if youre serious about winning or unfamiliar with a maps nuances). Despite the amount of on-screen activity in the more hectic areas, the action progresses quite smoothly on a decent PC. You can also speed up the invasion by holding the F button on your keyboard, or the appropriate button on your gamepad. Theres never a point where things move at an incredible pace, but thats probably for the best.

If youve been looking for an interesting title to add to your Steam library and you like being an armchair general, Defense Grid: The Awakening is a terrific investment. Featuring a wealth of content and solid campaign design that shows a thorough understanding of what makes the genre click, Hidden Path Entertainments attempt at tower defense is arguably the best on the market. Just dont be surprised if it leaves you hungry for raspberries.
4.5/5

If you enjoyed this Defense Grid: The Awakening review, you're encouraged to discuss it with the author and with other members of the site's community. If you don't already have an HonestGamers account, you can sign up for one in a snap. Thank you for reading!

© 1998-2020 HonestGamers
None of the material contained within this site may be reproduced in any conceivable fashion without permission from the author(s) of said material. This site is not sponsored or endorsed by Nintendo, Sega, Sony, Microsoft, or any other such party. Defense Grid: The Awakening is a registered trademark of its copyright holder. This site makes no claim to Defense Grid: The Awakening, its characters, screenshots, artwork, music, or any intellectual property contained within. Opinions expressed on this site do not necessarily represent the opinion of site staff or sponsors. Staff and freelance reviews are typically written based on time spent with a retail review copy or review key for the game that is provided by its publisher.