I can see everything perched high on the rooftops. My mission is clear: obtain all of the information I need on my next target and use it to end his life. Anything else is bonus, used to lengthen my stay in the Holy Land. Two suspicious men converse in a nearby alley while guardsmen bully a defenseless woman, threatening to abscond with her into a darker corner of the city. I have my work cut out for me.

So off I go, to pickpocket secret plans from one of my target's trusted employees; to spy on parleying idiots as they leak bits of their master's plan; to kill templars and collect flags within time limits for no reason except to make careless and lazy informants happy; to beat up town criers who promote wicked men and explain away their devious affairs. After I've gained all the intelligence I need, I'll blend in with the crowd (and never mind my peculiar robes and dangling weaponry) near my target. I'll sneak up behind him while he's distracted and plunge a hidden dagger into a major artery, then lay him down and have a heartfelt conversation about how he regrets nothing. I'll tear away from the crowd, battle guards with astounding ease, and eventually disappear into the shadows.

Then the process shall begin anew. 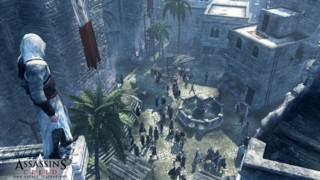 Assassin's Creed's first mission was a great introduction. It showcased what the title could do and what you can expect from future stages--called 'memories'--without bogging you down with ramped up difficulty. It familiarizes you with the various activities needed to advance, and left you hungering for more. You were even ready for the odd instance of being spotted, and either fleeing or fighting off guards. Besides acquanting you with mission structure, it wowed you technically. It took you through the expanse of the Holy Land, past lush greenery, bubbling streams and peaceful lakes. Eventually you came to crowded cities, fully fleshed out with awe-inspiring mosques and massive mansions, even dilapidated sectors rampant with beggars and desperate merchants. Assassin's Creed is nothing if not immersive.

"Nothing if not" can be a damning thing to say. Assassin's Creed stays technically beautiful throughout, but it turns up the intensity of its missions and combat so little. Every pickpocket activity is pretty much the same. You wait for whomever you're supposed to steal from to quit yapping, you follow him a few feet down the walkway, hold the 'Circle' button, and profit! The only screwball that Ubisoft throws at you is that the target will sometimes look over his shoulder. It doesn't take an idiot to figure out when he's going to do this, or how to avoid being seen. Only one pickpocket mission actually turns up the difficulty, and it's near the end of the game.

Other activities fall victim to the same flaw. Collecting flags never becomes more than a tedious chore. Neither does rescuing citizens or interrogating loudmouths. Only one activity actually gains noticeable challenge, and thankfully it was the most fun of the batch: templar execution. Some informants will ask you to discreetly assassinate a certain number of templars within a time limit. These activities make use of all of Assassin's Creed's core mechanics, where others only make use of the most minute abilities. Scenes like these, where you're executing someone, are the best parts of Assassin's Creed and feel like the "true game". Everything else feels like an interruption. 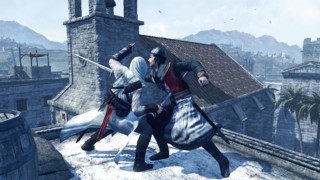 Even basic combat doesn't become much more challenging. I praise Ubisoft for staying away from button mashing. Rather, combat is based on timing. You can button mash, but it won't work in most cases. By attacking and hitting the attack button again as your blow lands, you can throw an opponent off balance and even instantly kill him. You eventually learn to counterattack, which becomes the most effective way to deal with enemies. So effective, in fact, that every battle becomes a matter of waiting for your opponent to strike and hitting the right combination of buttons. Enemies do not always attack ferociously, but stand back for upwards of ten seconds at a time. You can see attack coming from a mile away, can counter it with ease, and even wind up taking out the enemy without much effort.

Every battle, even the final battles, can be won in this fashion. In essence, you fight the same battle over and over again. The only time it steps up is the rare occasion that a templar is involved.

You can flee from battles and try to hide, and this is preferable. Sometimes, though, you cannot escape the ubiquitous guards. No matter where you run they can see you, preventing you from ducking into hay bales or blending in with a group of scholars. As such, running becomes tiresome and irritating. That's when you figure it's better to stop and repeatedly counterattack your assailants to death.

Assassin's Creed feels like it stuck in its introduction. The activities and combat change so little that the experience becomes a series of repetitious and tedious chore-like events. There is a little payoff end of each mission, because the scenes where you actually assassinate your targets are quite entertaining. Utilizing information given to you from the dull activities, you can form an effective strategy that will allow you to kill your target with the least amount of resistance. If that's not your style, you can go in guns--er, blades?--blazing and chase your opponent down. Whatever your style, Assassin's Creed is flexible. 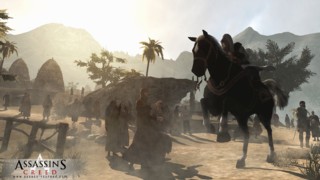 The only thing that will entice some beyond the assassination missions is the plot(s). Rather than taking the role of one man, you play as a man playing as his ancestor. The true protagonist is Desmond, a man captured by an eccentric researcher who is trying to delve into Desmond's ancestry for answers to a baffling mystery. Via virtual reality, Desmond is able to relive events in the life of Altair as he exposes and executes a brotherhood seeking to rule the Holy Land. Of course thing aren't so straightforward, and Altair falls victim to many traps and twists throughout his adventure. But just as you're getting into the intriguing bits of Altair's story, Desmond's interrupts it. Assassin's Creed will usher you out of the gorgeous Holy Land and back into a sterile laboratory where you guide Desmond in his quest of looking at things and eventually going to bed.

It's unfortunate that you have to chew through the boredom to get to the meaty parts. Assassin's Creed has very about it that's exciting or worthwhile. What few scenes that are are sandwiched between tedious activities and repetition. Without these activities, the game is too short; with them, the thrill is so intermittent that it's difficult to stay excited even when you get to the meaty parts. All we're left with when the excitement isn't there is a beautiful and immersive world.

It's not by any stretch an awful game. Assassin's Creed would have been better with more difficulty added to its activities, or even some extra ideas tossed in to expand on their concepts. The entire game should be enjoyable rather than just bits and pieces. It should also serve as a lesson to other developers: stop interrupting the good parts.
2.5/5

If you enjoyed this Assassin's Creed review, you're encouraged to discuss it with the author and with other members of the site's community. If you don't already have an HonestGamers account, you can sign up for one in a snap. Thank you for reading!

© 1998-2021 HonestGamers
None of the material contained within this site may be reproduced in any conceivable fashion without permission from the author(s) of said material. This site is not sponsored or endorsed by Nintendo, Sega, Sony, Microsoft, or any other such party. Assassin's Creed is a registered trademark of its copyright holder. This site makes no claim to Assassin's Creed, its characters, screenshots, artwork, music, or any intellectual property contained within. Opinions expressed on this site do not necessarily represent the opinion of site staff or sponsors. Staff and freelance reviews are typically written based on time spent with a retail review copy or review key for the game that is provided by its publisher.