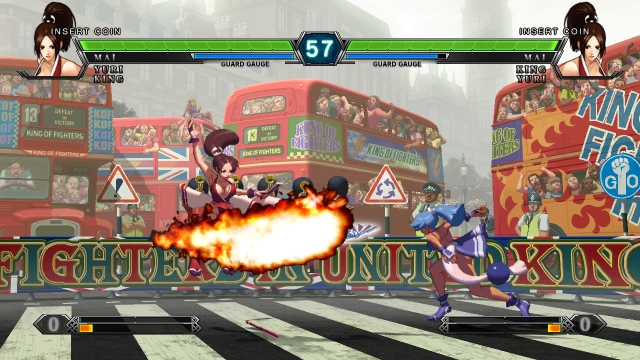 When The King of Fighters XII arrived two years ago, it featured a decent selection of fighters and they were drawn so beautifully and animated with such care that it was almost possible to overlook the games extremely limited selection of modes and fighters and its rushed presentation outside of the fighting arena. For the newest iteration, SNK Playmore has wisely replicated the previous installments triumphs while also significantly expanding the amount of overall content. The environments are all-new this year, but theyre no less beautiful. I miss some of the old content that didnt return like the fat ladies at the aquarium who amused me so much in the previous game, but the ladies feasting outside of a Paris street cafe are an acceptable substitute. Apparently, both SNK Playmore and I get a kick out of watching chubby spinsters shadow boxing, headbanging and dancing while thugs brawl nearby.

The characters youll find in this installment are both memorable and numerous, just the way I like them. The full roster includes the famously buxom Mai Shiranui, brothers Terry and Andy Bogard from the Fatal Fury series (along with their friend Joe Higashi), Ralf Jones and Clark Still and Leona Heidern from Team Ikari Warriors, Athena Asamiya, the group from the Art of Fighting series and many others. Any fighting game fan should quickly find several favorite characters. There are slow and powerful bruisers, tiny and agile schoolgirl types and everything in between. If you decide to spend the time that is required to master even a small portion of the more than 30 fighters, youll be busy for many hours. Some characters are less obviously gifted than others, but none of them seem to be useless. Even the diminutive Chin Gentsai, who employs the drunken master fighting style, is deceptively powerful once you learn how to put his hypnotic movements to use.

Unfortunately, mastering the various fighters has perhaps never been as difficult as it is here. When I started playing, the default mode presented to me was the Tutorial mode. I took that as a sign and started my experience there. In the following minutes, I was walked through the usual basic moves that youd expect from an SNK fighter, including a quick sprint and dodges, jumps and the like. Then the topic turned to the NEO MAX and EX attacks mentioned on the games packaging. I suddenly felt as if I had forgotten to study for a test. Some of the button combinations that you must string together in order to execute the most advanced combos make my fingers hurt. I cant imagine that most gamers will be willing to spend the time required to gain true mastery over more than a handful of characters, especially now that finger cramps are practically inevitable. 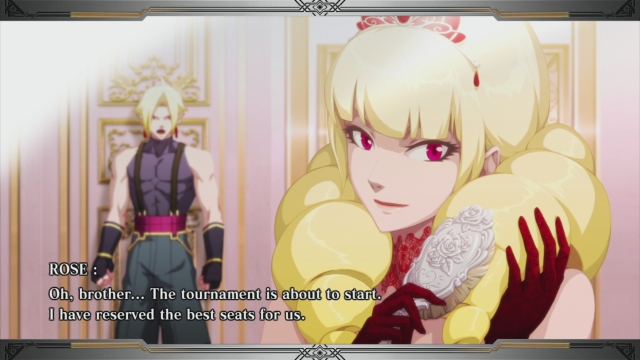 The good news is that complete mastery is never a requirement to enjoy the game. You should give the Tutorial mode a shot so that you get a feel for the basics, naturally, but youre free to try any mode you like right from the start.

Perhaps youll dive into the Story mode first. I missed that mode in The King of Fighters XII, so I was pleased to see that the developers included one here. Sadly, those efforts were wasted. The story mostly unfolds by way of static artwork as text appears on the screen for a moment and then vanishes. Theres no way to hurry the text along if youve finished reading and theres no way to slow it down if you havent. Pressing a button skips to another scene, so you either will take the story at the pace it is presented or youll forget about it. Even if you go with the former option, the story makes almost no sense and is revealed in a convoluted manner. Scenes are unlocked based on the arenas where you decide to fight as the story unfolds. Youll unlock some scenes as you go through the story once and then youll maybe unlock a few additional scenes on each subsequent trip. Or maybe you wont. Its a complete mess.

The Mission mode is a more straightforward (and therefore more enjoyable) diversion. You can choose Survival if you want to play against a stream of opponents, Time Attack if you want to see how quickly you can beat down a set number of rivals or Trial if the tutorial wasnt frustrating enough and youd like to try your hand at entering more demanding button combinations. 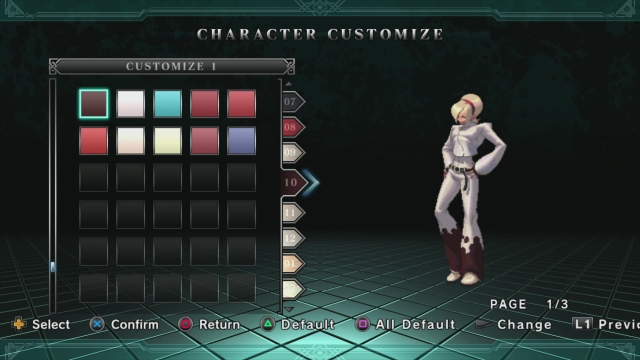 Arcade mode, at least, provides dependable entertainment. Youll choose three fighters and then you must take them through a series of battles against various rival teams. Along the way through the tournament, youll occasionally be challenged by one of three special (and unlockable) characters. Youll also see occasional bits of narration that are lifted without context from the Story mode. Then, right near the end of the proceedings, youll have to battle not one but two of the cheapest enemies the genre has ever seen. Thats right: there are two of the bastards, right in a row. Words fail to express how utterly demoralizing it is to breeze through most of the game, then hit a wall right at the end then to finally persevere and come right up against another wall. SNK Playmores development team found a way to give players the finger with gameplay. Even Rugal was never this bad. After you lose to a boss once you can try again with a boost to your attack and defense powers (or you can reduce your rivals life meter to 25% its usual level), but such a setup shouldnt feel as necessary as it does here. The bosses simply shouldnt be as cheap as they are and there shouldnt be two of them. Perhaps the development team was making up for the fact that The King of Fighters XII didnt include any bosses at all.

Thankfully, The King of Fighters XIII features a robust online mode that can keep you entertained even if you tire of the Arcade modes foolishness. Perhaps inevitably, there are the usual Quick Play and Ranked Play options. From there, though, things get more interesting. I was surprised to find that the game pays close attention to the quality of your internet connection. If you dont have a strong enough signal compared to the other folks who are online, you wont be able to join a game. That limitation successfully kept lag to a minimum in the matches I played, but at first I had trouble finding a match at all because I kept being connected to rooms that were already full and then I was automatically booted. I learned that it works better to take advantage of the option to play the Arcade or Practice mode online while you wait for a contender. I never had to wait long for a challenge when I went that route, even when I played the game in the early morning hours.

If you are the sort who likes to play online, by the way, youll probably appreciate the efforts that the game makes to allow you to customize your experience. Of course you can alter the game difficulty and controls from various menus, but its also possible to customize characters. The amount of control that you have increases as you spend more time with the game. You can unlock additional palette options as you rack up wins, and those colors can be used to modify over 20 portions of some character wardrobes, right down to eye color and lipstick and the color of shoe soles. Then you can save your favorite team (complete with customized versions) for easy access when you play online. Not only that, but you can also save and view replays of favorite matches. 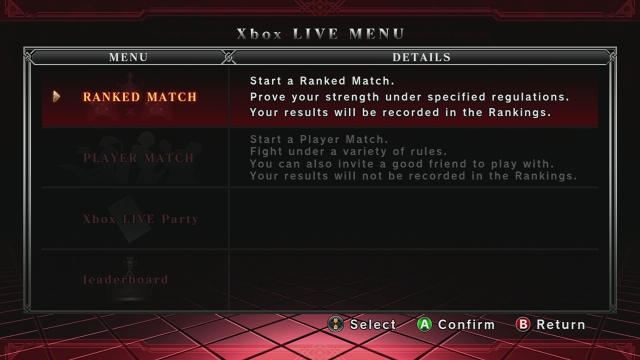 The King of Fighters XIII offers a deeper and more rewarding experience than its predecessor did without skimping on the eye candy, but the expanded content also produces some new issues. The interface is now more unwieldy, for instance, and the addition of a second cheap-as-hell boss at the end of the game is a step in the wrong direction. The available new moves should please franchise enthusiasts, but they make it even more difficult for a newcomer get up to speed with the series. Such issues are disappointing, but theres still depth and beauty here that you wont find anywhere else. When you factor in the welcome customization options and the robust online modes, its clear that SNK Playmore and this game both have something worthwhile to offer. If you have anything more than a passing interest in fighting games, make sure that you experience that something firsthand.
3.5/5

If you enjoyed this The King of Fighters XIII review, you're encouraged to discuss it with the author and with other members of the site's community. If you don't already have an HonestGamers account, you can sign up for one in a snap. Thank you for reading!

© 1998-2021 HonestGamers
None of the material contained within this site may be reproduced in any conceivable fashion without permission from the author(s) of said material. This site is not sponsored or endorsed by Nintendo, Sega, Sony, Microsoft, or any other such party. The King of Fighters XIII is a registered trademark of its copyright holder. This site makes no claim to The King of Fighters XIII, its characters, screenshots, artwork, music, or any intellectual property contained within. Opinions expressed on this site do not necessarily represent the opinion of site staff or sponsors. Staff and freelance reviews are typically written based on time spent with a retail review copy or review key for the game that is provided by its publisher.