It's inevitable that some excellent games are completely ignored. Dream Master has the misfortune to have nearly the same name as another well-known NES game. Little Nemo: The Dream Master. That, and the fact that DM was never released in the west has added to its destiny as a hidden masterpiece. Fortunately though, fate took a hand and the game received a fan translation into English.

On the surface this is a role playing puzzle game, with one character, an original turn-based battle system, and a simple story about rescuing a princess. But this apparent simplicity hides a complex and intriguing depth both in the story and gameplay. The game hangs on the idea that the evil dream master takes people away into the dream world where they stay forever, not yet dead, but never able to awake from their nightmare. He has captured the princess and the king has sent the very best mages and warriors into her dream to try and rescue his daughter, but all have failed. You are not told much about their adventures, but you get to meet all of them in their beds and discover the names, ages, skills and abilities of each one. It's a tantalising glimpse into a possible prequel that we never actually get to experience, but you get the sense of the scale of the problem.

We're also not told anything about the background of the main character who's an apprentice to a dream sage, but when the sage is summoned by the king it's the rookie who takes his place inside the dream world. There are seven distinct worlds that you enter, each one unique with its own particular challenges, but all are bound to together by the clever gameplay. In this game you have to use all your senses!

Each dungeon has many rooms that are completely obscured at first. They are covered in a kind of fog and this only clears as you walk around, BUT some of the floors are complex mazes, and each time you bump into a wall or drop down a hole you lose HP. You also bump into enemies as you explore: some of them are visible as a moving flame and others are hidden. What's so clever about this is that you can "hear" obstacles, traps and monsters. Traps are usually holes in the floor and they have a particular noise that alerts you to their presence, and enemies rustle as you get close to one. What this means is that you can circumvent both. However enemies that are avoided won't disappear and since the only way to level up is to defeat them, you want to fight them all. 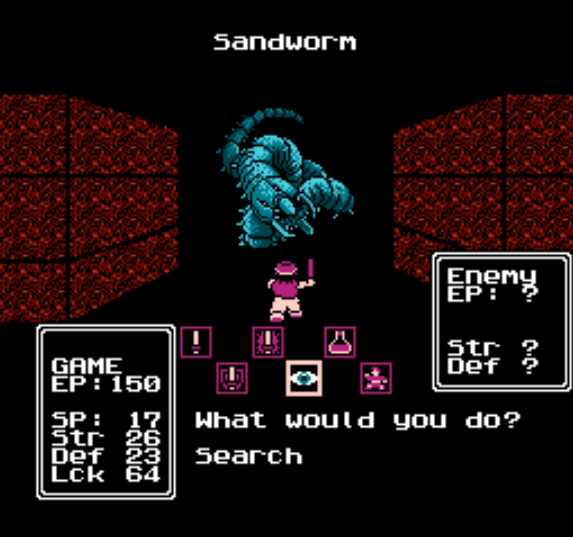 And you will want to, because the battle system so much fun. Although you mostly only have the single protagonist to work with, enemies also appear singly so it's you versus the foe in a one-on-one battle for supremacy. The commands include the option to "search" the enemy for weak spots and each enemy will have three of four areas of the body to hit, one of which is its Achilles heel! Find this and let rip your strong attack and there's a chance to disable the enemy before it annihilates you. The risk is that a strong attack will miss, as it has a higher percentage chance of inflicting more damage or none at all than an ordinary attack.

Another neat thing is that the number of enemies on each floor is limited. As you defeat more of them your progress is free from battles, and eventually you'll find yourself searching around desperately trying to find another monster to defeat so you can level up before the boss fight that always completes a particular dream. This is important because the game plays more like a survival horror than an RPG adventure. You can only level up to a pre-set maximum for each dream, and you start the next one back at class 1, although your HP and other stats are higher each time. Healing items are also in short supply and you don't gain any healing spells. Each dream has a healing spot where you're fully restored BUT you can only use this once. It's a matter of carefully monitoring your health and items and choosing the right time to heal and the number of times you need to fight in order to raise your class. This need to carefully manage your scant resources makes for a challenging game. Item storage is also restricted but you can deposit items on the floor and return to pick them up later if you need to. 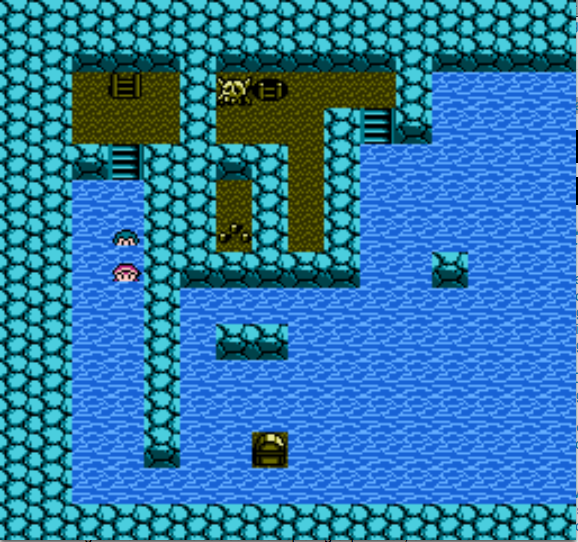 The puzzles are ingenious, often involving multiple skills, and navigation is tricky. You might have to place items on switches to open doors in walls you didn't realise were there, or push against apparently solid walls to find a deceitful gap. Ropes drop you down to hidden rooms, and tiny switches are hidden away in odd places. Holes open up in front of doors, requiring wooden planks to bridge the gap, or spinning tiles send you to the four corners of the room. Some puzzles are quite devious: for example, trying to work out in what order to press some buttons requires you to look at the floor map from a different perspective and you'll suddenly realise that the order is spelled out in the walls of the room. In another area you utilise a monkey ally to hop over walls for you and do things you can't do. One room on an island had me swimming around and around for ages, being buffeted by the strong current as I tried to work out the pattern of the currents and reach some steps. Only to later discover that there was a hidden opening in a place that was so obvious it was impossible to spot!

You acquire allies in each dream but they behave in unexpected ways, sometimes joining you in battle, sometimes opening a way for you or even sacrificing themselves to save you. These are those mages you met right at the start of the game. The tricks and ruses keep coming right up to the very end of the game: for example, you're stripped of all your equipment before fighting a difficult boss, but there's a way around this, if only you knew beforehand. 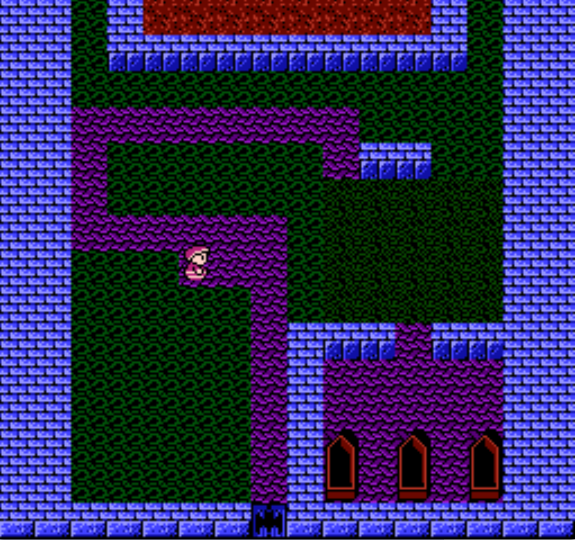 This is a game that continually keeps you on your toes. It's tightly packed with nothing extraneous or unnecessary, and is filled with a wicked sense of humour: as when you travel into a dracula type castle inside a coffin pulled by a bat and have to endure the taunting of the Black dream master as you move around stumbling into walls. One battle item is particularly delicious: you can use it multiple times and it randomly acts to help you out: a beautiful maiden might appear and entice the enemy, a tiny fly might suck away some HP, or a huge warrior stomps on the foe.

This nightmare is a delightful dream for any retro gamer.
4.5/5

If you enjoyed this Dream Master review, you're encouraged to discuss it with the author and with other members of the site's community. If you don't already have an HonestGamers account, you can sign up for one in a snap. Thank you for reading!

© 1998-2020 HonestGamers
None of the material contained within this site may be reproduced in any conceivable fashion without permission from the author(s) of said material. This site is not sponsored or endorsed by Nintendo, Sega, Sony, Microsoft, or any other such party. Dream Master is a registered trademark of its copyright holder. This site makes no claim to Dream Master, its characters, screenshots, artwork, music, or any intellectual property contained within. Opinions expressed on this site do not necessarily represent the opinion of site staff or sponsors. Staff and freelance reviews are typically written based on time spent with a retail review copy or review key for the game that is provided by its publisher.