Disgaea 4: A Promise Forgotten is the latest game from Nippon Ichi Software, a development team that routinely turns out games so unique and refreshingly niche that youd expect it to have gone out of business years ago. Here we are, though, a mere week ahead of the release of a fourth game in a series that conventional wisdom says should be a commercial flop in a world obsessed with digital headshots and online farming empires. Its clear that at least a few consumers still appreciate deep and addictive SRPGs. 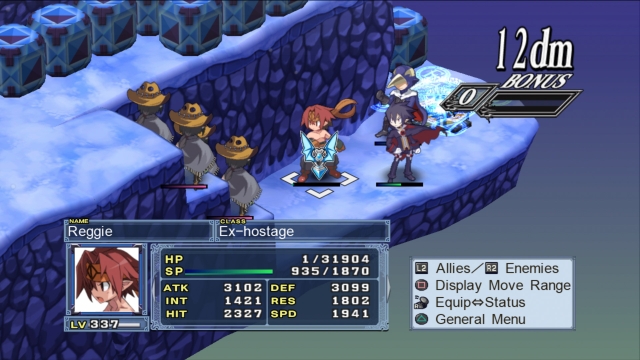 If youre one of the people who cant get enough of the genre, perhaps youre already familiar with Disgaea, a series that initially drew comparisons to Final Fantasy Tactics on the PlayStation but which has since earned a reputation as a very different beast. The series debuted on the PlayStation 2 with Hour of Darkness. That first title told the story of a demon named Laharl who awakened from his slumber following the extraordinary efforts of his loyal(?) and flat-chested vassal, Etna. What followed was a charming and unexpected tale, one that mixed angels and humans and broke the fourth wall whenever it liked, all in the name of humor. When the game wasnt making players chuckle, it was taking a break to startle them with seemingly limitless customization options and devious maps.

For better and perhaps for worse, time hasnt done much to change things. Though Disgaea 4 appears now on the much beefier PlayStation 3 (like Disgaea 3: Absence of Justice before it) and boasts sharper visuals and more vibrant environments than any of its predecessors, theres nothing that immediately hits you over the head and reminds you that what youre playing never could have been executed on the PlayStation 2. If youre looking for a technical leap, youre missing the point.

The real point of any Disgaea game is to give you an interesting sandbox to play in, and then to let you break it. You can always count on a unique story and there will be a bushel of carefully designed stages that start to feel more like puzzles than they do battlefields. There will always be grid-based combat and numerous skill trees and a slew of weapons and armor and other items. Most importantly, though, there will always be the key to it all: the Item World. 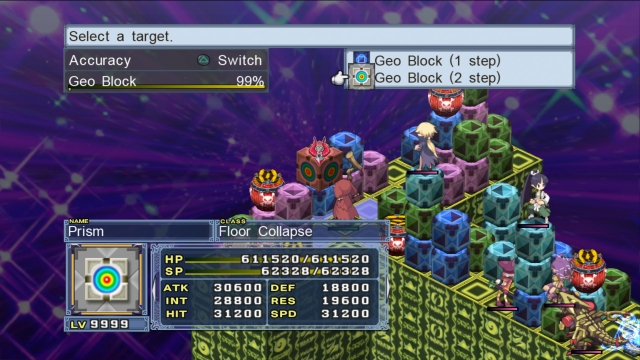 The Item World is a fantastic place that exists within each piece of equipment. Lets say that you buy a sword and it adds 247 to your ATK skill. Thats pretty cool, and it can help make your character powerful enough to survive encounters with dozens of enemy types. What if its not enough, though? What if youre getting owned like a granny playing Halo? Well, then you can dive into that weapon by visiting its internal world. After venturing to that magical realm, you can complete one floor after another and then when you exit, the item that played host to those stages will have improved. You might clear 20 stages in that sword and come out with a weapon that now deals twice the damage.

While its nice that you can use the Item World to improve a single weapon so quickly, though, the unique play mechanic also serves other purposes. As you travel deeper into each piece of gear, youll encounter increasingly powerful enemies. Their presence makes level grinding a simple process, if thats your thing, and it also allows you to amass a fortune in hell (the games currency) and mana points so that you can create new characters and unlock new skills. Before you know it, youve stayed up all night turning your pathetic little mage into a wizard who can level half the map without even taking a step from the base panel.

This review will go on forever if it spends too long detailing every feature in the game, though (especially those that have been true since the very first installment), and theres still a lot of new ground to cover. Onto whats new, then 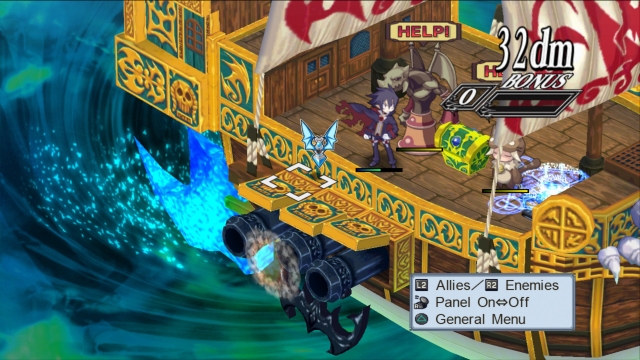 The most obvious and expected new territory is the all-new plot, which predictably takes place in one of the many thousands of Netherworld planets that previous games in the series have informed us fill the universe. This time, the tale revolves around Lord Valvatorez, a reformed vampire who draws his strength from sardines rather than human blood. His scheming vassal, Fenrich, hopes to help him return to power (All is for my lord, he says with one too many a flourish), but its clear that the once-powerful tyrant is more than content to live out his life as a prinny instructor. Then things change, and suddenly the pair find themselves embarking on a grand quest that will forever change the face of the Netherworld and--eventually--the human and celestial worlds. A lot of your opinion of the overall quality and originality of the story will come down to personal taste and your experience with the previous games, but returning veterans may be interested to learn that in general the narrative is neither as melancholy as it was in Disgaea 2: Cursed Memories nor as over-the-top silly and borderline pointless as it was in Disgaea 3: Absence of Justice. Dialogue and events find a happy medium somewhere in between those two extremes, much like Hour of Darkness did when it kicked things off so memorably in 2003.

As you would expect from the series, the tale is told through generous use of skillfully voiced dialog accompanied by animated character portraits. Theres actually very little dialog in the game that isnt voiced this time around, to the point where the occasional lines that dont have actors delivering them always come as a bit of a surprise. The project as a whole seems to have received more than the usual level of interest and attention from the people responsible for bringing it to North America, as evidenced by many of the lines, character names and item descriptions placed randomly throughout. Some of the humor and pop culture references are so obscure that you might not catch them unless youve watched Walker: Texas Ranger or a lot of commercials for cotton or any number of other random things, but many of the jokes are basic enough that anyone will spot them. Everybody wins.

While the story is new and its high-quality presentation is a delight that long-time fans by now take for granted, youll likely be surprised by some of the other improvements. For instance, its now possible to assemble your own pirate ship so that you can raid the Item World. On trips to your own Item World, youll find parts that you can use to customize your ship, plus youll battle more pirates than ever before. You can even have your custom pirate crew head online and raid other folks worlds, or help them out if you prefer. Not only that, but you will unlock pieces of architecture as you play through the game that can then be used to build your own custom maps which you can of course share online, if you so choose. Depending on your interests, this can add hours to an adventure that is likely to consume at least 40 hours of your time even if you dont let yourself get sucked into all of the distractions in the main campaign (to say nothing of post-game content). 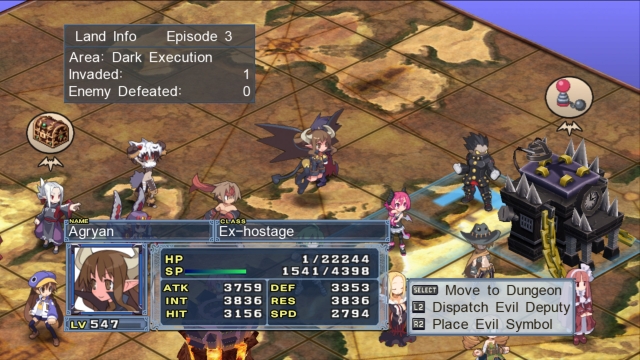 Disgaea 4 also lets you play a more political role in the Senate. You can appoint characters to posts in your political cabinet and position them on a map that then determines certain boosts they receive in battle. For instance, you can position four characters so that they all gain experience points from one another if any of them defeat enemies in combat. There are other twists, such as the campaign speeches new friends will give, or the discipline room and such, but again there is the risk of extending this review beyond the point where it remains readable.

If you look at Disgaea 4 screenshots, its easy to conclude that little or nothing of substance has changed. Even after you play the game for a few hours, it can feel like the only real change is the new storyline. The important thing to take away from this review is that there definitely are tweaks to the formula, and they definitely work as intended without changing things so much as to break what fans have always loved. None of the adjustments are likely to make you love the series if you hated it previously, of course, but they do add enough to the experience to keep everything fresh for another go-around. A Promise Unforgotten has evolved just enough to justify your investment whether it marks your first experience with the franchise or your eighth (lets not forget Disgaea Infinite and the ports of the first and second game for DS and PSP). The Netherworld has never been better!
4.5/5

If you enjoyed this Disgaea 4: A Promise Unforgotten review, you're encouraged to discuss it with the author and with other members of the site's community. If you don't already have an HonestGamers account, you can sign up for one in a snap. Thank you for reading!

© 1998-2020 HonestGamers
None of the material contained within this site may be reproduced in any conceivable fashion without permission from the author(s) of said material. This site is not sponsored or endorsed by Nintendo, Sega, Sony, Microsoft, or any other such party. Disgaea 4: A Promise Unforgotten is a registered trademark of its copyright holder. This site makes no claim to Disgaea 4: A Promise Unforgotten, its characters, screenshots, artwork, music, or any intellectual property contained within. Opinions expressed on this site do not necessarily represent the opinion of site staff or sponsors. Staff and freelance reviews are typically written based on time spent with a retail review copy or review key for the game that is provided by its publisher.