How would you like to score with girls from around the world?

I mean at tennis, you pervs! 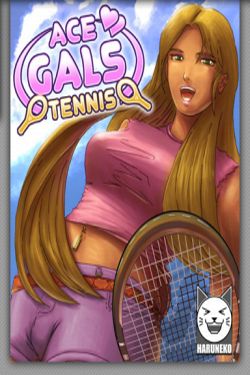 Ace Gals Tennis amasses eight ladies from various countries to battle it out on the tennis court. It's an onslaught of hand drawn babes with large (and sometimes misshapen) knockers, showing off their talents and cleavage. Sure, you have the conservatively dressed Elise wearing a secretary skirt, but then you have USA's very own Sarah, whose shorts barely constitute a bottom.

Even if you suck at tennis, Ace Gals Tennis is simple to pick up and learn. You only need the analog stick to control the direction of the ball and the A button to send it flying. The game rates your every shot--too bad, okay, or amazing--all depending on how late or early you hit the ball as it reaches prime whacking range. As the game's credo states: timing is everything. Hit a too bad and the game will often punish you by sending the ball out of bounds or allowing your opponent to hit a near-perfect shot. It'll take a bit of practice to get the timing down. The game makes great use of an easy difficulty, as it trains you on when to hit the ball by having it pulsate at the right time.

There is no need to control your character, represented by your Xbox Live avatar. He'll automatically run towards the ball a la Wii Sports tennis. This makes for a fast-paced engagement and puts the emphasis on ball control and timing.

You would think that a game that emphasizes timing wouldn't cheat you, and that every blunder would be your fault. There are some slight hiccups, though few they be, that have come as a result of questionable testing and development. Too bad is meant to punish players, yet I find that the computer often profits from it. There've been a few times where the computer scored a too bad and the ball landed in an area that I couldn't reach. The end result was the computer scoring on me by sucking. I know that sounds sexual, but believe me when I say it wasn't pleasurable in the slightest.

Too bad has also resulted in game glitching a few times. One lady returned one of my too bad shots and the ball flew straight up into the sky and never came back down. Its shadow moved backwards and eventually past the spectators. The camera zoomed past the crowd and into an in-game N-Zone where the tennis demons live; a completely gray screen with no scenery that we aren't meant to see. And who scored the point on that one? The computer. It seems there is a hidden rule that any time the game glitches, the computer gets the point. This has only happened a few times, thankfully.

It's funny how a rating based on poor timing can cause a wide range of phenomena. Just remember, timing is everything.

Though Ace Gals Tennis is simple to pick up, it will break your neck when you first play it. Getting the coordination down can be tricky at first, but once you pick it up the game becomes pretty addictive. You could even look past the uncommon glitchy flaws after a while.

With my confidence built up I entered Career mode, which consists of twelve tournaments for each of the three difficulties. That's thirty-six tournaments! While this does add a lot of content to a $1 game, it's a very daunting process to undertake. Only the easy tournaments start out unlocked, and the only way to access normal is to complete all twelve easy tournaments. With three matches per tournament, that's thirty-six matches you have to complete on easy mode. By the time I had completed my fifth tournament, I was bored of Career mode and almost couldn't continue on to normal.

Let's do some math: three matches with twelve tournaments is thirty-six matches per difficulty. Multiply that by three and you get 108 matches of the same gameplay in a variety of only three difficulties.

There's not much to differentiate one tournament from the next apart from the turf and location. You usually play against the same girls and can easily defeat them with the same strategy. All you need to do is hit the ball towards the front of their side to draw them forward, then send it towards the back where they're vulnerable. You'll score almost every time. The only thing somewhat challenging is playing the unlockable vampire chick Klaudya. She'll return your hits most of the time, but the same cheap strategy I mentioned earlier can be applied to her as well. The only difference is that you'll have to return the ball a few times before scoring. All this takes is a little practice and timing and you're golden. More irritating than that is that almost every tournament ends with playing her.

Complete all of the easy tournaments without falling asleep and you'll move on to normal. The difficulty hasn't raised that much, the first two girls can still be pretty easily taken out with the cheap strategy, and the only real change is that the timing is more stringent. The payoff isn't worth the time spent trudging through the easy tournaments. Career mode might have been more effective if the tournaments had been cut in half.

Ace Gals Tennis is a mixed bag highlighted by simple and addictive gameplay, but soured by a repetitive single player mode, uncommon glitches, and the lack of multiplayer. This is the kind of game that's meant for casual play, but the Career mode and two unlockable players suggest otherwise. The game might have been more effective if left in a more casual domain with less tournaments and more emphasis on multiplayer. Getting the friends together or slaughtering people online would have been the bee's knees. 80 MSP may not be much to spend on a casual tennis game, but the fact still remains that there are much better indie titles out there for the same price.
3/5

If you enjoyed this Ace Gals Tennis review, you're encouraged to discuss it with the author and with other members of the site's community. If you don't already have an HonestGamers account, you can sign up for one in a snap. Thank you for reading!

© 1998-2020 HonestGamers
None of the material contained within this site may be reproduced in any conceivable fashion without permission from the author(s) of said material. This site is not sponsored or endorsed by Nintendo, Sega, Sony, Microsoft, or any other such party. Ace Gals Tennis is a registered trademark of its copyright holder. This site makes no claim to Ace Gals Tennis, its characters, screenshots, artwork, music, or any intellectual property contained within. Opinions expressed on this site do not necessarily represent the opinion of site staff or sponsors. Staff and freelance reviews are typically written based on time spent with a retail review copy or review key for the game that is provided by its publisher.