Theres nothing wrong with Dungeon Siege III that a lower price tag wont eventually fix. Occasionally beautiful, often enjoyable and rarely guilty of trying to be something that it shouldnt, the latest game from Obsidian Entertainment (the team behind Alpha Protocol and Fallout: New Vegas) goes through familiar motions with surprising polish, even if it otherwise lacks any surprises of note.

Obsidian Entertainment may be known for convoluted adventures with grand ambitions and a tendency to let too many bugs slip through the quality control stage of development, but you wont find that evidenced here. If you work through the game and complete every side quest, youll quite likely spend no more than 12 or so hours in the effort and youll probably do so without encountering a single corrupted save file or floating NPC or whatever else. Theres a lot of dialogue, but it has little purpose other than to determine which of your allies winds up liking you the most. Indeed, you can skip through paragraphs worth of capably-voiced and subtitled discussion and still have no trouble figuring out where to go next and who to kill.

The games simplicity is a direct and reasonable result of the fact that, as its title implies, Dungeon Siege III is a dungeon crawler. When youre not talking to NPCs or assigning skill points and equipping armor, youll either be wandering a small town to find the person who will give you a new quest or side quest or (more frequently) youll be working through a dungeon. 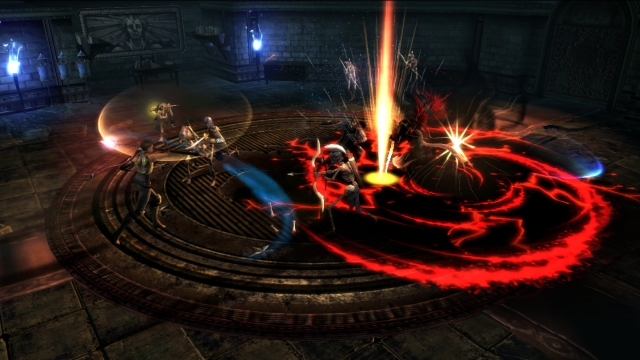 Theres a story to serve as your motivation, naturally. Basically, the Legion is on its last legs. The armys chapterhouses are vacant, rundown reminders of a once-great era when justice and honor ruled the land. Jeyne Kassynder, a warrior with mystical power and plenty of armies of her own to support her, struggles to rule a splintered province with her dainty fist of--but if youre the sort of person for whom this game was most clearly designed, you probably dont care about that. Dungeon Siege III has more narrative depth than a number of dungeon crawlers before it (including characters with actual personalities!), certainly, but its greatest accomplishment is the way that it throws you into a bunch of dungeons and lets you have fun shooting, slashing and magicking your way through hordes of stupid enemies who had no business getting up in the morning.

Combat is bliss. At the start of the single-player campaign, you choose one character out of four who are available. One character uses guns, another uses strong sorcery, another uses a big sword and a final one attacks with speed and a healthy dose of fire. Each hero is fun to master, with a variety of skills that complement one another--and the skills of the other characters--quite nicely.

You dont get through the game by relying on just one move. For instance, Katarina is the character who uses guns. She utilizes several types-- a rifle, a pistol and a shotgun--that she can switch between at the press of a button. If you start forward through a cave and suddenly youre facing a slew of spiders, you can tap the button to switch to the shotgun and produce spider corpses like theyre going out of style. Then, seconds later, as a huge troll stomps onto the scene, you can switch to your long-range pistol and blast the ugly off his face without breaking a sweat. 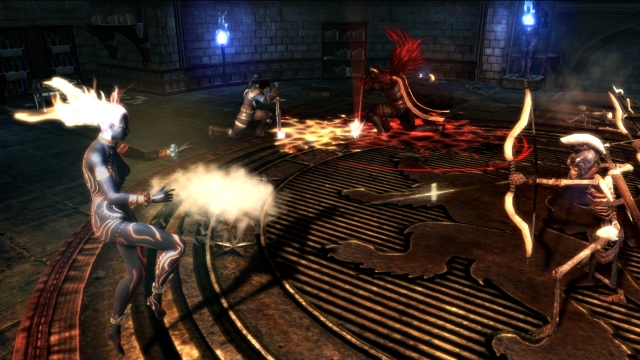 Weapon selection isnt all there is to the combat, though. Each character can master specialized skills that you can then use profusely. A skill requires a bit of focus from your meter, but you can swiftly refill that meter simply by hitting your adversaries with a few standard shots or strikes. The result is that its entirely feasible to roll through the whole game using the fun moves almost exclusively. Yet you can also roll out of the way of incoming targets, block sword strokes and projectiles and even heal yourself.

In Dungeon Siege III, you feel like an actual warrior who stands a chance at finding a happy ending for the kingdom. As long as you dont resort to grinding, though, youll still have to exercise the sort of caution that keeps things interesting. The game is paced beautifully on its default setting, meaning that as long as you are a decent player, you should have only occasional difficulty with the slimy hordes but youll rarely feel as if youre just walking around mashing buttons. Even if that unwelcome sensation were to settle in, there are the four fighter types from which to choose and theres a higher difficulty level that can provide a real challenge.

On a technical level, the game isnt what you would necessarily call a stunner, but it very capably gets the job done. Mostly, youre going to be looking at caves and the inside of manors and such, but theres actually a good variety despite the similar locations. Youll also wander beautiful forest trails and fetid swamps, so the dungeon in dungeon crawler isnt as limited as you might suppose. The artists clearly put a lot of attention into the little details (rippling water, distant rooftops, swaying trees) and the result is a world that feels cohesive and credible. Compared to some games that trump it in terms of visual splendor (The Witcher 2: Assassins of Kings comes readily to mind), another thing Dungeon Siege III has going for it is that you rarely see technical hiccups like pop-in if you have a decent PC. Thats admirable. 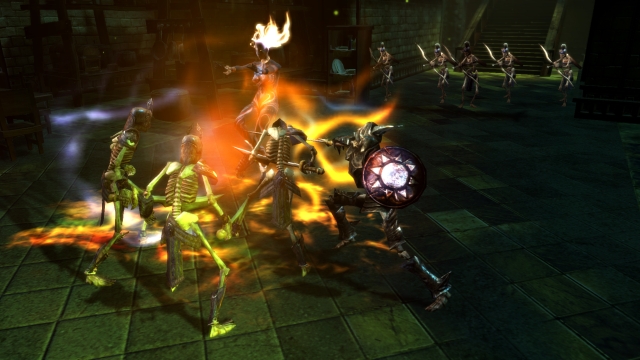 Though I didnt play the game with any friends, theres also a multi-player mode available. From what I gather, you have to share the screen with your ally, which would definitely make things cramped. It seemed like about half the time that I spent playing the single-player campaign, my ally was off the screen and I didnt care, or I was busy rotating the camera so I could see a boss I was shooting. Im not convinced that four people sharing the screen will be as awesome as it sounds, given some of the frantic battles that take place near the end of the game, but theres no one forcing you to do anything more than go it alone.

Played alone, Dungeon Siege III is a satisfying experience and one that I heartily recommend to fans of the genre. The people at Obsidian Entertainment definitely put forth a good effort and the result is definitely worth owning at the right price. Watch the usual places closely and the minute you see the price drop to $30 or so, pick it up. Youll be glad you did.
3.5/5