Another world lies beyond our own; one made of sugar-coated nightmares and drug-induced hallucinations. There, a hybrid Rosswell alien-snowman searches for his missing companions while battles murderous clowns and disembodied lips. This world and its events are documented in the ramblings of those who have beheld it, programmed into a gray cartridge called Ufouria: The Saga.

As you can imagine, this isn't your average 8-bit adventure. Rather, think of it as Mario meets Metroid. So... Marioid? Metrio? This ridiculous realm offers a wide variety of platforming situations, demanding your best leaping skills, useful items and helpful additional characters to overcome hardships and find a way out of this twisted wonderland.

Your quest opens up in the middle of nowhere, a wide open space occupied by blobs and slithering lips. After you bounce past them, you'll arrive at a floating head and a dead end. A moment's pause reveals a rope lowering from the sky. Climb it and find that the line is actually a long strand of drool hanging down from another disembodied head. Because of course it is. 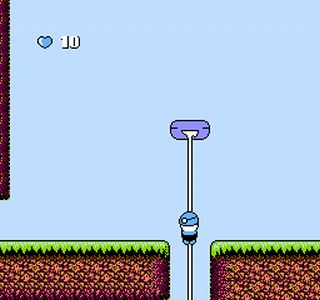 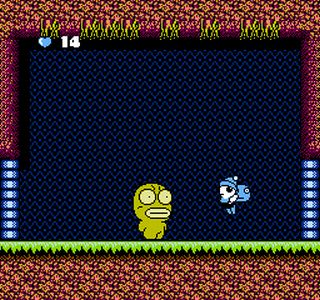 Oddities never ceases. When you're not getting lifts from bariatric birds with propellers on their heads, you're swimming past harpoon-toting anthropomorphic dogs in scuba gear. Not long after dodging crows that drop ten-ton weights, you're slaying a giant naked man with a bulbous head or a cat in full medieval armor. Like I said, sugar-coated nightmares...

Your main offense requires you to make like Scrooge McDuck and jump while holding down. That collision doesn't kill its victim, though, but turns it into a severed blue head that you can toss at other foes. You might notice at this point that the control response and layout is very similar to your standard Mario game. Ufouria takes full advantage of it, crafting a winding world with cute/weird combat where these mechanics feel right at home.

Unlike other platformers, Ufouria isn't linear, but features a contiguous land built of corridors and platforming segments, where not a single space is wasted. In other words, you don't encounter many dead ends or red herrings here. Every location either holds a new item or ally that expands the area you can explore. For instance, you'll come across a huge, uncrossable body of water at one point. Your only chance lies in meeting up with Freeon-Leeon, a lizard who can float on water. And you can bet crossing the lake will take you to more quality content, including a boss encounter. 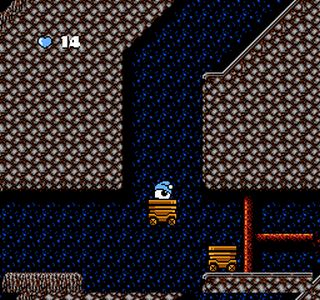 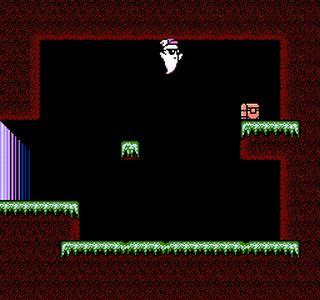 I talk about enlisting friends and gaining new goodies like it's no bother at all. But the truth is you still run afoul of a plenty of quality, challenging segments--and even some that aim to trick you. One scene pulls a Mega Man, where you have to jump from one cloud to another before the one beneath you falls. You eventually arrive at a section where cannot advance any further, and you assume you've reached the end of the line. The next cloud is unfortunately too far away, so hopping over to it is out of the question. As it turns out, you actually need to wait for another unseen platform to rise in front of you, giving you a surprise assist.

Another tricky scene has you freezing creatures that float up and down over lava, creating temporary platforms. Obviously, you can screw yourself if your timing isn't just right. You need to freeze the initial ones low to the ground, while progressively chilling others at higher altitudes. Should you ice one too high off the ground, you might not be able to freeze the next target. Your reward for failure is a dip in the burning brew below and a "game over" screen.

Death sends you to the very place you began your voyage. However, you retain all of the other progress you've made, including your equipment and friends. Sadly, you still have to trek all the way back to where you left off and hope you prosper this time around. Let me tell you, this process gets exhausting. You travel a decent ways into an area, kick a lot of butt and nearly reach a new destination. Then you perish and respawn at the starting point, only to redo that entire journey again. And again. And again. Times twenty. Times fifty. If anything drags what would've been a thoroughly delightful 'Metroidvania' title, it's this snag. 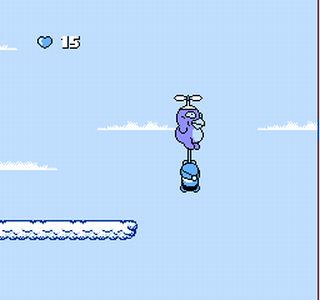 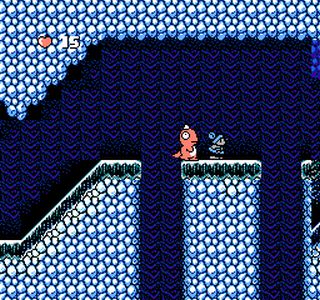 If you need to rest, fear not. You aren't obligated to complete the campaign in one sitting, as passwords exist. No, you can't just save and come back. You actually need to grab some scratch paper and a pencil, unless you plan on using save state (you blasted pirates!). At least this way you can let your weary mind take a break before you return to the surreal death gauntlet.

Thankfully, you can wrap this title up in a few hours. On the other hand, that also means there isn't much content. Personally, I ended this adventure feel slightly underwhelmed by the game's brevity. While you can complete the campaign in one or two sittings, you may not come away from this title with your Metroid itch fully scratched.

Although the lack of checkpoints and shortness hamper the experience a little, Ufouria succeeds by melding two classic titles together, creating a game that creative, quirky and rife with exploration. It's a memorable piece with an elaborate environment and carefully planned segments that will definitely test your skill and patience. Space is seldom wasted, and exploration nearly always begets a boon of some kind. That's ultimately what matters in non-linear platformers like this one, even if a few flaws prevent it from being the absolutely killer title it could've been.
3.5/5

If you enjoyed this Ufouria review, you're encouraged to discuss it with the author and with other members of the site's community. If you don't already have an HonestGamers account, you can sign up for one in a snap. Thank you for reading!

© 1998-2020 HonestGamers
None of the material contained within this site may be reproduced in any conceivable fashion without permission from the author(s) of said material. This site is not sponsored or endorsed by Nintendo, Sega, Sony, Microsoft, or any other such party. Ufouria is a registered trademark of its copyright holder. This site makes no claim to Ufouria, its characters, screenshots, artwork, music, or any intellectual property contained within. Opinions expressed on this site do not necessarily represent the opinion of site staff or sponsors. Staff and freelance reviews are typically written based on time spent with a retail review copy or review key for the game that is provided by its publisher.