My mind hungered for something simple, something interesting, vibrant with colours and challenge. I thought I found my nourishment with Thunder Force.
Starting its blazing trail in 1983, it certainly has its fair share of followers, who are, more or less, quite satisfied with probably the landmark 16bit shooter series. So, with such a proven formula, I could not help but notice that the last game in the series seemed to live in obscurity. Released in late 2008, Thunder Force VI, looked the part, promising everything an aspiring Thunder Force fan should look forward to, from the unforgiving difficulties, numerous weaponry and various onslaughts of alien forces to slaughter. Surely the fact that it was never released outside of Japan couldn't have been enough to stop the die-hard fans from elevating it to cult status like some of its predecessors? Maybe it was just a forgotten gem whose fate was to suffer a release at the wrong time? Perhaps the audience was robbed of the chance to appreciate the awesomeness in front of them?

The answer is an disenchanting "meh".

In Thunder Force VI you play as a member of the Unified Earth Army, an ace pilot, whose story and motives are never really explained. All thats known is that you are awesome in a space ship, and as such are sent to destroy everything that shares the same air space as you do. Never being one to turn away the prospect of total and utter obliteration of an indigenous species, I jumped right into that prospect. 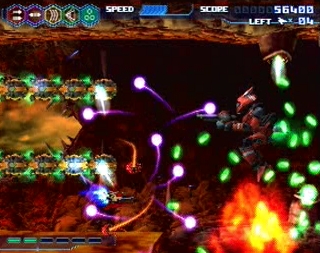 Digging in, you'll find your ship to be a frail thing. One well placed hit from an adversary, and you're dust, which is why you'll have to work hard on your maneuverability skills, before being able to compete in anything but the easiest of difficulties. Keep in mind, that in this sort of game, dying is something that will come naturally. Sometimes death will simply come because you didn't pay enough attention to the enemies on the screen and they overwhelmed you with their sheer quantity, and, sometimes, its all but unavoidable, so no need to fret. Death will become a good, trusted ally to you. Sometimes, a boss will, instead, gleefully, sodomize you. 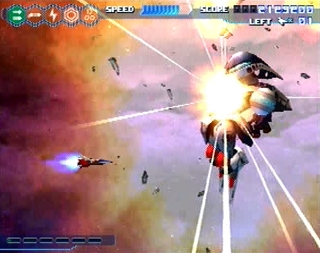 Actually, yes, there is. The ship is armed with four different weapons that can be used in various ways, depending on the situation you're in. For instance, theres a weapon that fires twin waves of bullets that cover a large portion of the screen which is a great to take out surging waves of weaker enemies, but it's fire power is impotent against stronger enemies. These will prompt the use of stronger weapons, like the Free Range, which, despite the pitiful distance it can travel, packs a mean punch and obliterates harder enemies, bosses included. To cover the most ground, employ the Back Shot that fires in a small corridor both in front and behind you, making sure that no sneaky aliens hit you in all the commotion. If you want to survive, you'll learn to adapt to your conditions and cycle fast between those weapons.


So, the question for all Thunder Force fans concerns the game's difficulty, something that every shoot-them-up masochist thrives on. Will you bleed out of your eye-balls, curled into nothing more but a pathetic lump of flesh in the corner, knowing that you'll never, ever beat that damn boss on Level 3?

No. Despite everything said about the enemies and bosses, the game can be almost laughably easy when compared to its predecessors. One of the reasons for that is that you always have an ace in the hole in the form of an Overload. An Overload is a special type of attack that pumps your selected weapon to immense proportions, allowing it to obliterate everything on screen. Overload the Back Shot and fire five beams of absolute death in every direction and clear the screen. Fire even your default, weakest weapon in this mode, and it turns into a massive beam of energy that will turn everything in front of you into space dust. 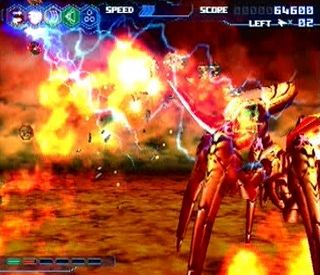 However, being easier than the previous games could be excused; theres scaling difficulty levels for the veterans, and a shooter a casual player can slip into without months of intense training could be a boon to the stumbling genre. But. What can not be forgiven, however, is how short the game was. On the easiest setting, you'll plough through the game in half an hour.

That's it. Half an hour. Game Over.

Admittedly, you don't get the full content on such a setting, but this is still not an excuse! On a higher difficulty, you'll get slightly more content, and the game will certainly be harder, but that will add maybe an hour and a half more, and then you're done. There are unlockable new ships that dont change a huge deal, but the main deal of the game is done in such a offensively short amount of time the abrupt conclusion sneaks in and slaps you in the face.


When you weigh in all of the pro's and the con's of the game, there is no conclusion to be made but this:

This could have been the best in the Thunder Force series. The graphics are very presentable, in a beautiful mesh of standard 2D for shoot-em-up games and 3D environments in specific places, and while the story is laughably simple, it was never important for this game. The gameplay is fast, fluid, and even if things are far too easy for your ship to prevail, there are times when youll need to weave through bullets and plasma blasts on little more than a prayer. Thats when the game feels alive, but its a rare occurrence rather than the norm. The enemies are different, interesting, presenting both technologic wonders and bio-mechanical travesties of a sick mind.

Then its over. Its over before it really begins. The experience is chronically let down by a lack of length and a wide streak of leniency. It goes against what I remember about the Thunder Force of old.

If you enjoyed this Thunder Force VI review, you're encouraged to discuss it with the author and with other members of the site's community. If you don't already have an HonestGamers account, you can sign up for one in a snap. Thank you for reading!

© 1998-2021 HonestGamers
None of the material contained within this site may be reproduced in any conceivable fashion without permission from the author(s) of said material. This site is not sponsored or endorsed by Nintendo, Sega, Sony, Microsoft, or any other such party. Thunder Force VI is a registered trademark of its copyright holder. This site makes no claim to Thunder Force VI, its characters, screenshots, artwork, music, or any intellectual property contained within. Opinions expressed on this site do not necessarily represent the opinion of site staff or sponsors. Staff and freelance reviews are typically written based on time spent with a retail review copy or review key for the game that is provided by its publisher.