Years ago, a disaster struck Raccoon City and an uncontrollable outbreak of something called the T-Virus transformed the city into a zombie-ridden death trap. The company behind the virus' creation--Umbrella Incorporated--was forced to wipe out the city in an effort to stop the outbreak from spreading. Looks like they didn't get it all...

But Survivor is not your average Resident Evil game for two reasons:

Its painfully weak. And its the first Resident Evil game Ive come across to use an FPS engine. Thats right: Survivor attempts to be Doom meets RE. 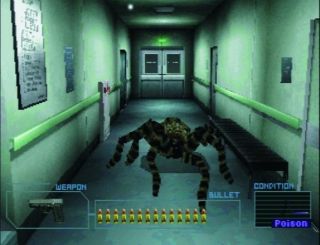 Well address the FPS aspect (the good news) first. The survivor horror formula, such as it is, is borne out rather naturally using a first person perspective, a fact that is supported by the somewhat similar over-the-shoulder viewpoint adopted in the new and wildly popular rebirth RE games. Its undeniable that taking in moments thick with dread and the macabre feels more immersive from this viewpoint. From a functional standpoint, the Gun Con peripheral is implemented rather nicely, and if you are stuck using the Dual Shock pad in its place, you won't be too disappointed as its control scheme is equally competent.

The bad news is the effort used to carry this out. Weve been able to rely on Resident Evil games for certain ingredients that bespeak their quality: amazing polygonal graphics, cheesy cinematic cut scenes, and their ability to spook the player. Survivor only gets the cheese right. This game looks horrid, but fails to provide the horror. Everything looks like its from a first generation PlayStation game--jagged edged and flat panelled polygons abound.

Its not that ugly graphics alone should necessarily doom a game to fail at being creepy: the original Alone in the Dark is proof positive of an extremely archaic offering maintaining an undeniable eldritch appeal. But Alone is probably the exception rather than the rule, because there isn't anything scary about Survivor, despite the subtitle's attempt to indicate otherwise. I had hoped that there would be a little more terror in the air--Id gladly take scares of the cheap, pop-up-in-your-face variety; but even those B-movie moments are scarce. 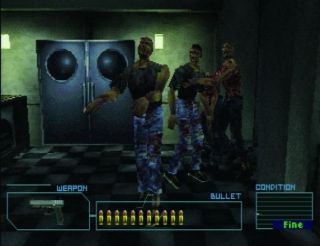 As per the Resident Evil modus operandi, in unravelling the mystery, you will be called upon to solve some extremely simplistic puzzles (e.g.: there is a manhole cover, use the crowbar to gain access), and peruse the usual glut of diary entries left carelessly behind on the owners' desks. But Survivor feels decidedly more mindless than previous instalments, and that's saying a lot.

It says a lot too, that the music is a highpoint in Survivor--I cant recall it ever being notable in previous or subsequent iterations. Here, against the rickety backdrop erected by the games other ramshackle elements, the music seems compelling, and manages to help the frail storytelling along surprisingly well. It encourages your feeling of paranoia, and adds a potent sense of immediacy to your mission.

Indeed, everyone is out to get you: the kindly folks at Umbrella in their SWAT team gear and the zombies alike--working in tandem to see you dead. All you can do to see yourself through is to keep moving constantly, taking out the weaker foes with your handgun--which has unlimited ammunition--while bringing the shotgun and more powerful weapons like it to bear on the stronger foes and bosses. In this sense, the games subtitle Survivor makes its claim: your foes are not horrific but en masse they are relentless and its all you can do to stay alive. 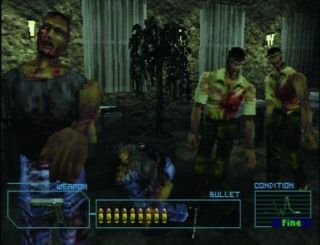 Thats the extent of Survivors plea for our attention. Its glaringly thin when juxtaposed with the quality weve come to expect from the series, but when a series has as many games in its canon as does Resident Evil, there are bound to be some rushed-to-the-market stop-gap efforts. Resident Evil: Survivor is one of those. Its actually a testament to the inherent attractiveness of the RE premise that Survivor actually doesnt seem that bad. (Given that Capcom, REs producers, avail themselves of the art of soulless sequels more often than most, its surprisingly that Survivor took as long as it did to come along.)


So if you dont expect Resident Evil: Code Veronica-type shocks (or presentation), Survivor isn't the absolute worst choice of bargain bin PSX title. You can actually have a good deal of mindless fun running down zombie-infested corridors in the first person, unloading bullets into all manner of kitsch-inspired characters. You can't save your game, so you'll need about two-and-a-half hours set aside to finish the bloodletting, and if you have that time, youll likely beat it the first time you play it. Predictably, Capcom has included various replay incentives as there are secrets to be uncovered that will require revisiting the game numerous times. But you won't.
2/5

If you enjoyed this Resident Evil: Survivor review, you're encouraged to discuss it with the author and with other members of the site's community. If you don't already have an HonestGamers account, you can sign up for one in a snap. Thank you for reading!

© 1998-2021 HonestGamers
None of the material contained within this site may be reproduced in any conceivable fashion without permission from the author(s) of said material. This site is not sponsored or endorsed by Nintendo, Sega, Sony, Microsoft, or any other such party. Resident Evil: Survivor is a registered trademark of its copyright holder. This site makes no claim to Resident Evil: Survivor, its characters, screenshots, artwork, music, or any intellectual property contained within. Opinions expressed on this site do not necessarily represent the opinion of site staff or sponsors. Staff and freelance reviews are typically written based on time spent with a retail review copy or review key for the game that is provided by its publisher.