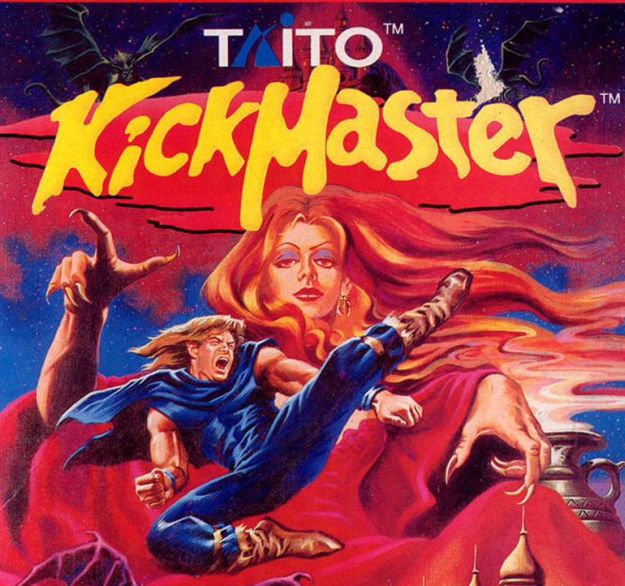 The wizard Belzed has decimated the forces of the kingdom Lowrel and kidnapped its sole surviving member of the royal family, the princess. Thankfully, two warriors survived the onslaught, the brothers Marcen and Thonolan. The two of them embark on a quest to rescue the princess when Marcen meets a grisly end, leaving an enraged Thonolan to deal with Belzed and his monsters.

Did I mention he's a martial arts master whose hobbies include magic, mystery novels, and kicking things in the face?

Kick Master is not a revolutionary title, though it might seem so. In actuality, it differs little from its brethren: Castlevania, Ninja Gaiden, Vice: Project Doom, etc. Yes, you advance to the right. It's always to the right with these games... Yes, you still have to negotiate platforms, time your strikes, and learn how to dodge oncoming assaults so you can mitigate damage and survive to fight the area boss. The main difference, though, is that you command no other weapon than your feet and toes. True to its title, Kick Master is all about giving all things nefarious the boot. Wizards? Kicked. Zombies? Kicked. Pesky birds that have it in for ninja? Kicked. Sirens? Damn right they receive a mouthful of trotter.

There are RPG elements that add some depth to the kicking. Killing an enemy causes them to explode into three power ups that scatter as they fly through the air. Although you're a martial arts master, you're not able to move quickly enough to nab all three most of the time, so you better make your selections quickly. Some of these items boost your experience, allowing you to level up every thousand points. This doesn't make you stronger, per se, but unlocks new and useful new attacks, like a knee drop or a flying kick, as well as increasing your hit points.

Flasks replenish your magic points, which allows you to cast various spells found throughout the game. This might sound like a neat addition, but the truth is magic feels tacked on. Most of the time, you end up conserving MP because spells are costly and individual flask, which are uncommonly dropped by foes, don't refill enough magic points. Typically, you might end up saving all of it so you can heal yourself whilst engaged in a boss encounter.

The game's straightforward level designs aid in maintaining a swift pace. There's a firmer emphasis on action in this outing instead of exploration, especially since there's an incentive to scotching the opposition. Each stage isn't a walk in the park, either. The first stage might belie the game's simplicity, what with its abundance of weak nemeses and a pathetic boss battle. After that, you'll run afoul of tougher combatants who are not only harder to fell, but difficult to so much as nail because many of them run tricky patterns that require some practice. The ability to acquire new kicks allows you to experiment and develop new strategies for dealing with the game's many creatures. Then once you've gotten comfortable with a segment, the game blindsides you with a surprise boss encounter. Get used to this, because each stage after the first has multiple bosses to contend with. Learning how to cut down on damage and charge through a stage as quickly as possible is half of the game's enjoyment.

The levels themselves tell a story. Where they lack complicated design, they all follow a scheme very similar to Ghosts 'N Goblins. You get the feeling you're on a lengthy, important mission, voyaging from a gorgeous forest where the corruption has only taken its hold to the forbidding fortress of Belzed. Along the way, you navigate through a treacherous series of cliffs, then hop on a boat to a far away land, where you kick your way through the muck and despair of the swampy lands before Belzed's domicile. Even though there are only eight levels, you feel like you've been on a hell of a trip. There are no cutscenes apart from the opening one, either. You pretty much have to piece that story together in your mind, pushing your creativity.

That trip requires patience, and the controls and hit detection will test it. The control response feel a tad stiff at first, but acclimation does eventually set in. The main issue is figuring out how to perform new kicks. The game doesn't outright tell you how to do so, so if you don't have an instruction manual or access to a FAQ, you're pretty much screwed. This becomes even more problematic when you realize there are some strikes that are too valuable to neglect, especially the knee drop. Even then, you have to hope that the game doesn't randomly decide to ignore one of your blows. There have been times where I obviously made contact with my feet, but the game didn't register the maneuver. Granted, this doesn't happen very often, but it's enough to take the game's rating down a point.

The bottom line, though, is that Kick Master is an exciting trip packed with loads of action. It's not flawless, but the staunch challenge factor, steady pacing, and inventive menagerie of beasties are what make this game worth playing. Well, that and the kicks. I mean, if you hate kicking, you're not going to like this game. It's that simple. But for someone like me, who enjoys games that as bizarre and ridiculous as they are challenging, Kick Master is a classic.
4/5

If you enjoyed this Kick Master review, you're encouraged to discuss it with the author and with other members of the site's community. If you don't already have an HonestGamers account, you can sign up for one in a snap. Thank you for reading!

© 1998-2020 HonestGamers
None of the material contained within this site may be reproduced in any conceivable fashion without permission from the author(s) of said material. This site is not sponsored or endorsed by Nintendo, Sega, Sony, Microsoft, or any other such party. Kick Master is a registered trademark of its copyright holder. This site makes no claim to Kick Master, its characters, screenshots, artwork, music, or any intellectual property contained within. Opinions expressed on this site do not necessarily represent the opinion of site staff or sponsors. Staff and freelance reviews are typically written based on time spent with a retail review copy or review key for the game that is provided by its publisher.